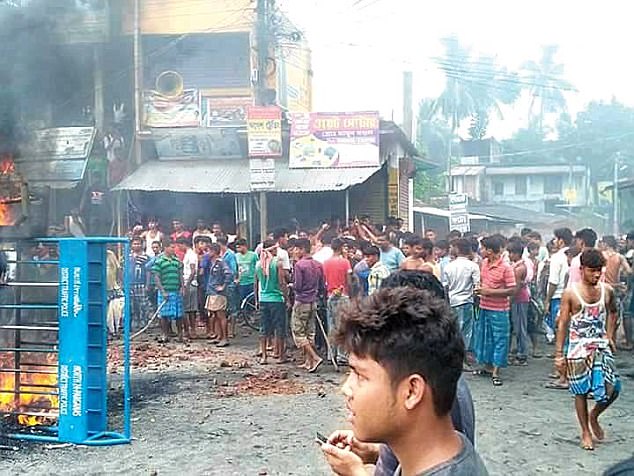 West Bengal is again witnessing horrific communal violence being perpetrated by Jihadi mobs as a form of “protest against a Facebook Post”, which allegedly made offensive and disparaging comments on a shrine.

Numerous houses and shops belonging to local Hindus have reportedly been looted and burnt, vehicles have been set on fire, roads have have blocked and a large number of villagers have been assaulted and molested.

The trigger was a Facebook post by a boy in his teens, who was soon arrested by the police. This failed to assuage the mob, who demanded that he be handed over to them so that they could stone him to death as per Sharia. A similar incident had taken place in Mumbai earlier this year when a Muslim mob wanted to provide justice themselves to a ‘blasphemer‘ even though police had acted in the case.

The mob in Basirhat has since also disrupted the final Rath Yatra procession of Lord Jagannath and even destroyed and desecrated some Raths according to reports. Even as the situation continues to be very tense, the Chief Minister Mamata Banerjee is reportedly still refusing help from the centre, maintaining that all is well.

Even now situation continues to be tense with the train services in the region remaining disrupted for 4.5 hours due to obstruction by agitators.

All this while some media outfits didn’t mince their words and reported things as it is, but there was a large section of the media which chose to maintain utter silence or reported a watered down version of the whole incident, as we had witnessed earlier too.

This caught the attention of various netizens who reacted aplenty:

Pic 1: When a JNUite was heckled at court

Pic 2: When Bengal is burning

Unless I missed it, Calcutta’s leading English newspaper has four stories on Mamata vs Governor. Not one detailed report on the violence pic.twitter.com/0u5PcaJSmK

Meanwhile @ndtv.com ran a watered down #BasirhatRiots story before pulling it out in hours. Journalism of the basement https://t.co/GIZj3zSTgv

We live in a country where Fake campaigns like #NotInMyName generate more TV debates & media coverage than actual Riots in Bengal https://t.co/CiDdsxCmeS

A also journalist went ahead to claim that there was no Communal Violence in Basirhat:

All is not well :in Bengal . Stand off between cm and governor not good : residents of baduria tell @CNNnews18 no communal tension

No communal tensunn. Heavy vehicles turned upside down due to cyclone in Baduria. https://t.co/i0ASO8UUZA

No communal tension, the shops, houses and vehicles just self combusted https://t.co/WqyfjvJ0f7

There was some acknowledgement of the troubles later in the day after Mamata Banerjee chose to attack the West Bengal governor and the center demanded a report from the state.