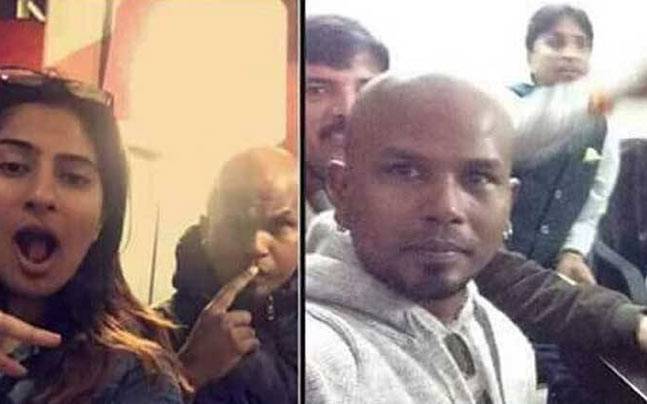 Ram Subramanian is supposed to be an ad filmmaker who has worked with top advertising firms like Ogilvy, Contract. But recently he seems to have started specialising in political agenda peddling and hate mongering.

A well known AAP supporter, he had openly volunteered to work for the party in the 2015 Delhi assembly elections and had shot to fame for being a mentor to minute-made celebrity Gurmehar Kaur who held a placard and proclaimed that ‘Pakistan didn’t kill her father, war did’. This had later exploded into a free speech under attack narrative after she was allegedly trolled and also supposedly received death threats. However, it came to light that the torch bearer of free speech had herself threatened and intimidated a group of young boys running a harmless meme facebook page.

The mentor of liberal celebrities and alleged ad filmmaker hoped that the “pretentious Mahatma” meets his “Godse soon” implying that he hopes Narendra Modi gets assassinated.

Netizens too didn’t take kindly to this self-proclaimed liberal hoping for the assassination of the Prime Minister of the country and reacted sharply to his tweet.

Some commented that while the Media has been screaming about how the Press is “scared to report about Modi”, there are people like Ram who are openly calling for his assassination with impunity.

Press scared to write about Modi?
They need to change professions
Then they will be able to openly threaten the life of a democratically elected PM pic.twitter.com/PFlJ2SizB0

Many others appealed to Twitter India to ensure action considering Ram was indulging in blatant hate speech and calling for murder.

Hi @TwitterIndia@TwitterSupport just reported this guy, this is clear hate speech and worse calling for a PM’s assasination, you gonna take action or come up with some vague reasoning again?https://t.co/wmGrz2HtVd

And other wondered why the harbingers of virtue like Gurmehar Kaur, Pritish Nandy etc who follow the hateful bigot were silent on this blatant call to murder.

Any ‘Hall of Shame’ for this @AltNews? pic.twitter.com/1zrQJsblPC

This is not the first time that Ram Subramanian has made statements that betray every sense of decency and morality. He had earlier displayed his fascist colours and abused people from UP and Bihar. Later, Ram had also decided to first insult India by questioning what is so great about this country, and then when someone said they are proud of the Indian Army, Ram decided to insult the Army as well.

Till the time this report was published, Ram had not deleted his hateful tweet and none of the “liberals” who follow him had gathered the courage to condemn this hate speech and call for assassination.