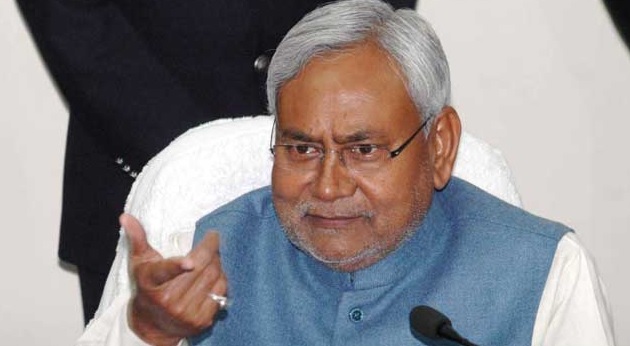 A controversy erupted in Patna on Wednesday after an RJD leader put up posters ahead of Dusshera, wherein party’s heir apparent Tejashwi Yadav was likened to ‘Lord Ram’ and Bihar Chief Minister Nitish Kumar was portrayed as the ten-headed demon king ‘Ravan’.

The poster inscribed with a slogan in Hindi, borrowing a verse from the Bhagavad Gita, reading, “Whenever Ravan has committed atrocities, a Ram has incarnated”, was put up by Rashtriya Janata Dal (RJD) officer-bearer Anand Yadav.

‘Samvidhan Bachao Nyay Yatra‘ was imprinted on the poster, which was an obvious appeal to the people to support Tejashwi Yadav on the next leg of his public interaction programme, slated to begin from October 21.

Besides drawing criticism from the Bihar’s ruling party, JD(U), which is headed by Nitish Kumar, who has been depicted as ‘Ravan’ in the posters, surprisingly, this act also gathered denunciation from the Congress party which is an alliance partner of the RJD. 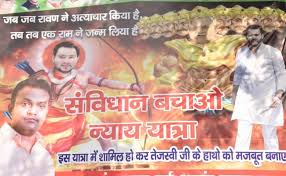 Though in the past Congress leaders have themselves, not left a single opportunity to belittle the government with their controversial remarks, ironically came out to condemn the act. Bihar Pradesh Congress Committee (BPCC) president Madan Mohan Jha and campaign committee chairman Akhilesh Prasad Singh told reporters, “This is not proper. No problem with Tejashwi being compared to Ram. But to depict anybody as Ravan is inappropriate. To call the chief minister a demon king is certainly not on“.

The posters, which were seen across Patna yesterday, were removed this morning.

The Lalu Prasad-led RJD later clarified that the posters were not put up to scorn the chief minister but to critique the government in the state.

However, the JD(U) spokesperson Rajiv Ranjan Prasad in his loathsome response said that the RJD rule in Bihar was marked by lawlessness. Their disrespect for the state’s chief minister was yet another reflection on its character.

Asked whether the JD(U) would like the government to take any legal action against those involved in putting up the posters, Prasad told the media, “We do not attach much importance to the poster which deserves to be in dustbins. It is for the RJD to decide whether it wants to pursue its politics with the help of such unruly foot soldiers”.

The JD(U) was quick to remind the RJD that it was Nitish Kumar’s face which helped them to increase their tally from 22 to 80 in the 2015 assembly elections. “What can you expect from the RJD? Have they forgotten the 2015 elections when it was a face of Ram (read Nitish Kumar) which helped them win 80 seats,” furthered party spokesperson Rajiv Ranjan.

However, this was not the only political poster on display during the Durga Puja festivities in Bihar. There were other posters put up by the Congress too, trying to belittle the BJP government.

A poster put up by the Congress offering a ‘reward’ of Rs 5 crore to whoever came up with the names of 35 airports supposedly built during the tenure of prime minister Narendra Modi besides the ‘truth’ of the Rafale deal was seen at some places in the state capital.

In fact, earlier too, the deep-rooted, horrendous, casteist bias of the Congress Party was boldly out in the open when a poster with a group of State leaders of the Congress party along with the party president, Rahul Gandhi, depicting the respective caste groups the leaders belonged to emerged in Patna.

In its retaliation to the ongoing ‘poster war’, the BJP in a quick-witted move had almost immediately displayed posters, wherein below every individual leader’s picture ‘Bharatiya’ (Indian) was imprinted in bold. This came as a hard punch to the Congress who has often taken recourse to caste-based politics.