The Wire, by saying that Ankit Sharma was 'beaten to death' does not only attempt to water down the brutality meted at him but also tries to scale down the magnitude of bestiality inflicted on the Hindus by the Islamists in Delhi as a whole. 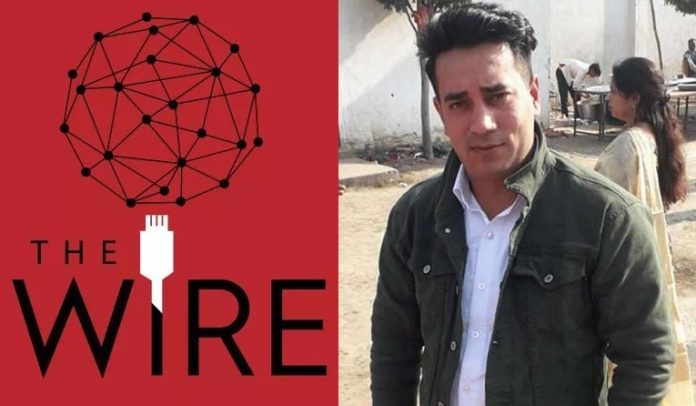 While the sheer enormity of savagery and barbarity inflicted on the IB sleuth Ankit Sharma by the Muslim mob in Delhi’s Chand Bagh area allegedly headed by Tahir Hussain left the nation appalled, the leftist propaganda website, The Wire tried to dilute the depravity heaped upon him by saying that he was ‘believed to be beaten to death’.

In an article dated February 28th, 2020, titled: ’42 Dead, Names of 28 People Killed in Delhi Riots Confirmed’, the Wire staff pens down the name and details of 28 people out of the 42 killed in the Delhi anti-Hindu riots.

Though the IB officer, Ankit Sharma, finds a mention in the report at number nine, the reason for his death has been mentioned as “believed to have been beaten to death”.

The Wire, by saying that Ankit Sharma was ‘beaten to death’, not only attempt to water down the brutality meted at him but also tries to scale down the magnitude of bestiality inflicted on the Hindus by the Islamists in Delhi as a whole. It is, in fact, a shoddy attempt to shield the Islamist aggressors and cover-up their spiteful mindset.

Ankit Sharma’s autopsy report had revealed the horrific brutality that was inflicted on him before his body was dumped in a ditch behind the house of AAP leader Tahir Hussain.

The autopsy report said that Ankit Sharma was stabbed over 400 times, and his body had been mutilated beyond belief. He had stab wounds all over his body and not even a single portion of it was spared. He was stabbed for hours, four to six hours, by possibly as many as six individuals together, according to the report. Moreover, his intestines were ripped apart, said the autopsy report. Forensic doctors have reportedly said that they haven’t seen such nightmarish mutilation in their lives. The report said that the body had “multiple abrasion.. deep cut.. by sharp edge objects”.

The panel of doctors, who carried out post mortem, had clearly stated that Ankit Sharma was brutally and repeatedly stabbed, which had caused his death.

According to the multiple eyewitnesses accounts, along with Ankit Sharma, there were three other people too who were dragged away by the frenzied Muslim mob inside Hussain’s building. However, one of them managed to make a miraculous escape and perhaps dodged an excruciating death. OpIndia got in contact with this escapee to seek more details about the gory incident.

The minor boy, who was successful in rescuing himself, laid bare his experience in chilling details about the carnage unleashed by the Muslim mob sheltered inside now expelled AAP leader Tahir Hussain’s building. “They were dragging us inside the building. I somehow evaded their grip and extricated myself. But when I looked back, all three were missing,” the boy said in a trembling voice while referring to the three people including Ankit Sharma who were dragged inside Hussain’s building by the murderous mob.

Ravinder Sharma, the father of IB official Ankit Sharma had divulged that his son had gone missing along with his two friends on Tuesday, soon after he returned from work around 4.30 pm. Pinning the blame on AAP councillor Tahir Hussain and his men for the death of his son, Kumar alleged that his son’s body was thrown from a mosque into the drain.

Speaking to OpIndia editor Nupur J Sharma, Ankit’s brother Ankur also divulged the chilling sequence of events that led to the brutal murder of his brother. He said that the Muslim mob had dragged Ankit to Tahir Hussain’s house, the AAP corporator. While Ankit was being dragged inside by the Muslim mob, from the 4 storey building belonging to Tahir Hussain, stones started raining down on everyone below.

In fact, it was not just stones that rained down. Ankur says that along with stones, petrol bombs and even gunshots were being rained own by the Islamists from inside Tahir Hussain’s building.

According to Ankur, this was being done so nobody would attempt to rescue Ankit. As soon as Ankit started being dragged inside the house, Hindus ran to rescue Ankit, however, they were fended off by the rain of stones, petrol bombs and bullets.

As it has emerged, AAP Corporator Tahir Hussain is smack in the middle of this brutal saga where Ankit, a young, dedicated IB officer was brutally murdered. Eyewitnesses have said that Ankit Sharma was dragged in the house that belongs to Tahir Hussain, AAP corporator, by a Muslim mob along with two others. Images and footage of Tahir Hussain himself wielding a laathi have emerged along with the rooftop of his house, littered with stones and petrol bombs. The roof of his house was used by hundreds of Islamists to throw stones and petrol bombs on people in the area.

An FIR has been registered against Tahir Hussain under section 302(a) of the IPC for the murder of Ankit Sharma, on a complaint filed by Ankit’s family. The AAP ex-councillor reportedly went missing immediately after the complaint was filed against him and is still absconding.

While the country reeled under the shock of a government official being so brutally tortured during the Delhi riots, the Left media, treated Ankit Sharma as just another name.

The Left media followed the decided narrative of the rest of the Islamist apologists to the very last word. Till the FIR was filed, several Left media outlets did not even bother covering the brutal murder of Ankit Sharma.

The first article that The Wire wrote on the murder of Ankit Sharma, was on the shoddy defence that was presented by the AAP corporator Tahir Hussain.

The second article that The Wire wrote on Ankit Sharma’s brutal death only mentioned the FIR being filed and repeated some of the lies by Hussain.

The leftist media has been shamelessly trying to shield the Islamists and paint Hindus as the aggressors even before the Delhi anti-Hindu riots broke out. With the Delhi riots, that cacophony has reached its zenith.