More
Home Opinions A part of the Indian media and 'liberals' have decided to burn this country...
Opinions
Updated: 14 July, 2017

This (the image below) actually appeared in an Indian publication as commentary on the Amarnath massacre: 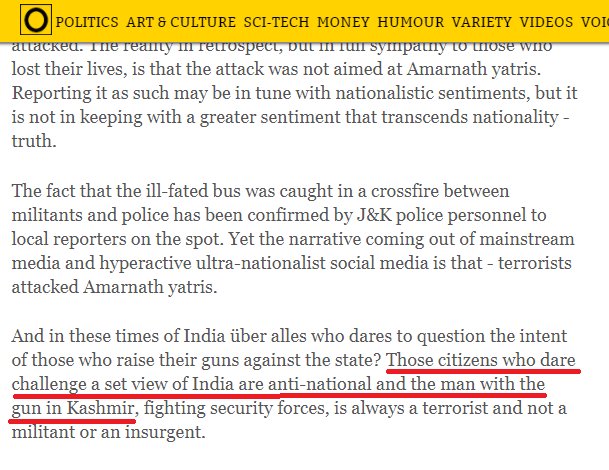 Terrorists being described as challengers to a “set view of India” who dare to pick up guns?

First they said it was okay to call for “Bharat tere tukde honge” as it was a matter of free speech.

Roughly a year later, things have come to such a pass that even if they pick up guns and start killing security forces, we can’t call them “terrorists”. Even that would be intolerant!

Nowadays, it is hard to tell whether we are looking at Indian publications or at Pakistani state propaganda. This used to be the Facebook header of the commentary website Newslaundry:

If I had blacked out the name of the publication in this photo, would you be able to tell if this was from an Indian news website or from the mouthpiece of Lashkar?

We are being bombarded today with liberal news commentary that is extreme, anti-national, openly secessionist and full of bizarre justifications of violence against the Indian state in general and Hindus in particular. Here is The Quint talking about the recent anti-Hindu riots in Bengal. 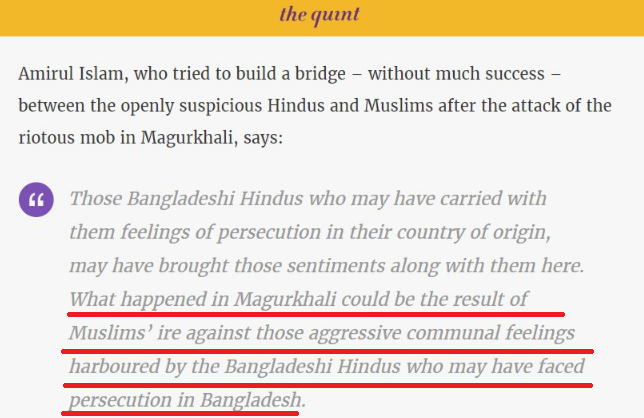 The riots happened because Muslims were angry about “aggressive feelings” inside the minds of Hindus who *may* have faced persecution in Bangladesh! The feelings sitting inside the brains of Hindus were aggressive, not the Muslims who rioted!

Liberal reporting always had an agenda. But nowadays there is an added nastiness it has taken on that I don’t recognize from before. It seems new. Here is another media take on the riots in Bengal!

The sheer audacity of claiming moral equivalence between the Muslim rioters in Bengal and those who came out on the streets of Delhi to protest the gangrape of Nirbhaya!

In a rational world, a statement like this should end a journalist’s career. Quite on the contrary, the journalist in question, someone named Ajit Sahi seems to have got a leg up in his line of work. The man who made this outrageous remark is now a “fact-finder” for Firstpost, who is filing their official ground report from Basirhat! 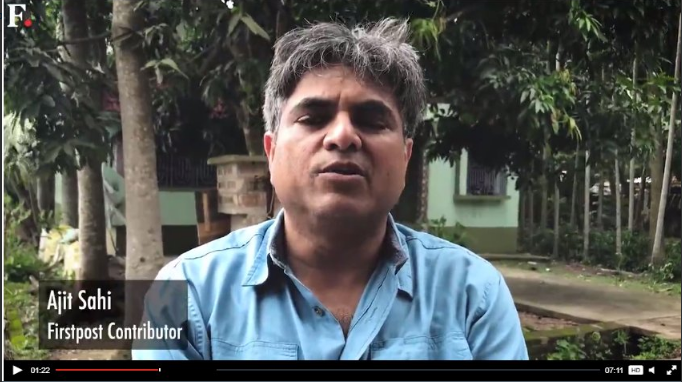 Somewhere out there it seems that a bridge has been crossed by liberals : from hypocrisy to open hatred against Hindus and India.

They are confident of getting away, because they have an organised strategy to make Hindus feel shame and guilt, thus taking all the hate and insults as justified, while “nationalism” has already been made a dirty word by them.

How else do you explain this?

This sea change in liberal discourse — from hypocrisy to outright anti-India hatred — did not go unnoticed among India’s enemies. There is evidence that India’s enemies now regard India’s liberal media as an ally in their cause. A while ago, Jamaat ud Dawa (Lashkar) chief Hafiz Saeed heaped praise on prominent TV journalist Barkha Dutt.

I am not making a case that Barkha Dutt should be held accountable for the views of Hafiz Saeed.

But, receiving praise from top Lashkar-e-Toiba terrorists should have given the liberal media a moment of pause … to reflect on what it is they are doing to their country and its standing in the world.

Where did this extreme nastiness in the liberal discourse come from?

From losing the 2014 election to Narendra Modi, of course.

That they would throw such a tantrum speaks of the extreme immaturity and lack of foresight on part of the liberal media. And three years into the Modi government’s term, the tantrum is only intensifying.

Right now liberals feel they have no stake in the country because Modi keeps defeating them in election after election. So they are happy to throw the country to the wolves. You know, like those jilted lovers – as they are wrongly called by the media, for they are criminal haters, not lovers – who will throw acid and disfigure the face of a girl who rejects their advances.

I just want to tell them that they can revel in declarations of #NotMyPM and #NotInMyName but it’s always going to be their country.

Don’t hate it so much. Or if you must, don’t preach and propagate that hate.

If anything, liberals must realize the revolving door of democracy never stops turning. Five years ago, the BJP was nowhere in contention. Who knows what will happen five years from now? In fact, just two years.

Dear liberals, why not stay sane and wait for your turn to rule? Nothing lasts forever.

If nothing else, remember that what you see today as your enemy Indian state under Modi might well be Pappu’s grand empire tomorrow. And unlike BJP, the Congress knows which mouths to feed and which egos to massage. Achchhe din aayenge.

From Times of Islamabad to The Hindu: 5 media outlets which ’knew about the Balakot airstrike before it happened’ according to ‘liberal’ logic

The Mumbai Police leaked the private WhatsApp chats of Arnab Goswami on the internet in order to embarrass the Republic TV Editor.
Read more
Entertainment

‘Consensual affair’ between minors and adults not a valid defense, says SC: Here’s why it is significant in view of growing Grooming Jihad cases

The Supreme Court on the 13th of January delivered a very significant judgment in a case involving the kidnapping of a minor.

Several media organisations have published headlines that alluded the ward boy who died of heart attack in Moradabad, had lost his life because of COVID-19 vaccine

UP Police has sought custody of 'comedian' Munawar Faruqui in a 2020 case pertaining to allegations of insulting Hindu gods and goddesses.

Hinduphobic content on OTT platforms and censorship: The case against it and the ironic case for it

The poster of 'Madam Chief Minister' showed Richa Chadha holding a broom. Many have called it an offensive stereotyping of the Dalit community.
Read more
News Reports

‘Not a single NPA in the three decades of its existence,’ Adani Group rubbishes Subramanian Swamy’s allegations

On Friday, BJP MP Subramanian Swamy had put out allegations on Twitter against Adani accusing him of non-payment of loans worth Rs 4.5 lakhs, which has allegedly turned into an NPA.
Read more
Media

What the Nidhi-Harvard story reveals about our world: Get off your high horse, you are not that special, anyway

Liberal journalist, Nidhi Razdan, thought she had received an offer from Harvard University to become an Associate Professor of journalism.
Read more
Media

Prithviraj Chavan has admitted that it was the Mumbai Police which leaked the private WhatsApp chats of Arnab Goswami.
Read more
Media

Mamata Banerjee declared that she would be contesting the upcoming Assembly polls from Nandigram in Purba Medinipur.
Read more
Media

From Times of Islamabad to The Hindu: 5 media outlets which ’knew about the Balakot airstrike before it happened’ according to ‘liberal’ logic

The Mumbai Police leaked the private WhatsApp chats of Arnab Goswami on the internet in order to embarrass the Republic TV Editor.
Read more
News Reports

California pauses the use of a huge batch of Moderna COVID-19 vaccine: Read why

Prior to this, a doctor in Boston had developed a severe allergic reaction after receiving Moderna COVID-19 vaccine
Read more
Entertainment

‘Took his penis out and asked me to feel it’: Actress Sherlyn Chopra accuses Sajid Khan of sexual harassment

‘Consensual affair’ between minors and adults not a valid defense, says SC: Here’s why it is significant in view of growing Grooming Jihad cases

The Supreme Court on the 13th of January delivered a very significant judgment in a case involving the kidnapping of a minor.
Read more
Entertainment

BBC ‘Death in Bollywood’ documentary: Jiah Khan’s sister narrates how Sajid Khan harassed the actor, says ‘he asked her to take off her top’

Several media organisations have published headlines that alluded the ward boy who died of heart attack in Moradabad, had lost his life because of COVID-19 vaccine
Read more
News Reports

India Today CFO was earlier summoned by the ED for questioning in the TRP case on January 8.
Read more
News Reports

UP Police has sought custody of 'comedian' Munawar Faruqui in a 2020 case pertaining to allegations of insulting Hindu gods and goddesses.
Read more
Read all the latest news