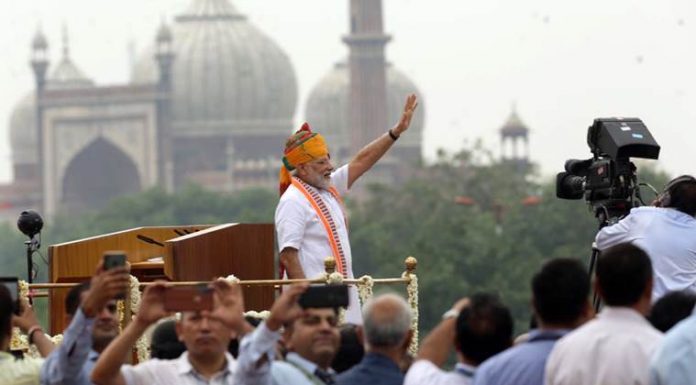 On the 73rd Independence Day of India, Prime Minister Narendra Modi delivered his speech from the ramparts of Red Fort. This was his first Independence Day speech of his second term. It was also the first speech after the abrogation of Article 370, the bifurcation of Jammu and Kashmir and the Triple Talaq Bill that was passed by the Parliament. PM Modi started his address by remembering the victims of the floods that many parts of the country is reeling under. From the ramparts of Red Fort, PM Modi spoke about several issues including population explosion, water scarcity, triple talaq and the abrogation of 370.

Here are the 5 important takeaways from the Prime Minister’s Independence Day speech:

Prime Minister Modi spoke about the historic decision to abrogate Article 370 and bifurcate Jammu and Kashmir into 2 Union Territories – J&K and Ladakh. Prime Minister said that his government believes in solutions and not creating problems for the country. In less than 70 days of his government, Article 370 was abrogated and he wishes to serve the people of Jammu, Kashmir and Ladakh. He said finally, the Nation can proudly say ‘One Nation One Constitution’.

One Nation One Election

Prime Minister Modi announced that the government is going to spend at least Rs. 3.5 Lakh crores on this mission. PM Modi said that this has to be a people’s movement and will only succeed with the active participation of the people.

Consequent to the submission of the Kargil Review Committee report, a group of ministers (GoM) headed by then Deputy Prime Minister L. K. Advani had analysed the functioning of the higher defence organisation in India. Among the major recommendations of this GoM was the establishment of the post of CDS with a tri-Service joint planning staff HQ. The CCS accepted this recommendation but held its implementation in abeyance. The two reasons cited for the deferment were the lack of political consensus on the need for a CDS and opposition within certain sections of the armed forces and the bureaucracy. More recently, the Naresh Chandra committee is reported to have recommended the appointment of a ‘permanent’ chairman of the Chiefs of Staff Committee (CoSC) as the first among equals.

Prime Minister Modi announced from the ramparts of the Red Fort that the government is moving forward on the creation of the post of Chief of Defence Staff, which has been a long-standing demand of several people.

Other than this, the Prime Minister also spoke about making India an export hub, agriculture, clean India, Make in India and also wished Afghanistan on its upcoming 100th Independence Day.