The meltdown of the liberal crowd over an OpIndia report being used to debunk one of their lies only reveals the twisted definition of 'Fake News' in the liberal world.

The Solicitor General of India, Tushar Mehta, cited an OpIndia report to debunk a misleading piece of news by IndiaSpend and The Wire on Kashmir following the abrogation of Article 370. The report that the Solicitor General was referring to was presumably an article which debunked the lies spread by the Liberal establishment that erroneously claimed that mental health issues were on the rise in Kashmir after the historic decision on August the 5th.

As expected, the liberal establishment is not happy with the recent development. Because according to them, those who share a different point of view than them should not be part of any mainstream discussion. They wish to limit mainstream discourse to an elitist club of like-minded individuals where ordinary citizens of the country find no place to share their concerns. Thus, when the Solicitor General relied on a report by OpIndia to debunk their lies, the liberal establishment suffered yet another meltdown.

Read: The Wire and India Spend use 2015 survey and laces it with lies to say mental health issues on the rise in Kashmir post abrogation of Article 370

Nidhi Razdan mocked SG Mehta for apparently citing a ‘fake news website’ to debunk ‘genuine information’. Ironically enough, she works for NDTV, the Mother of Fake News Media. It will take an individual only a couple of minutes to discover the dozens of times NDTV has peddled fake news as they only have to visit our website. 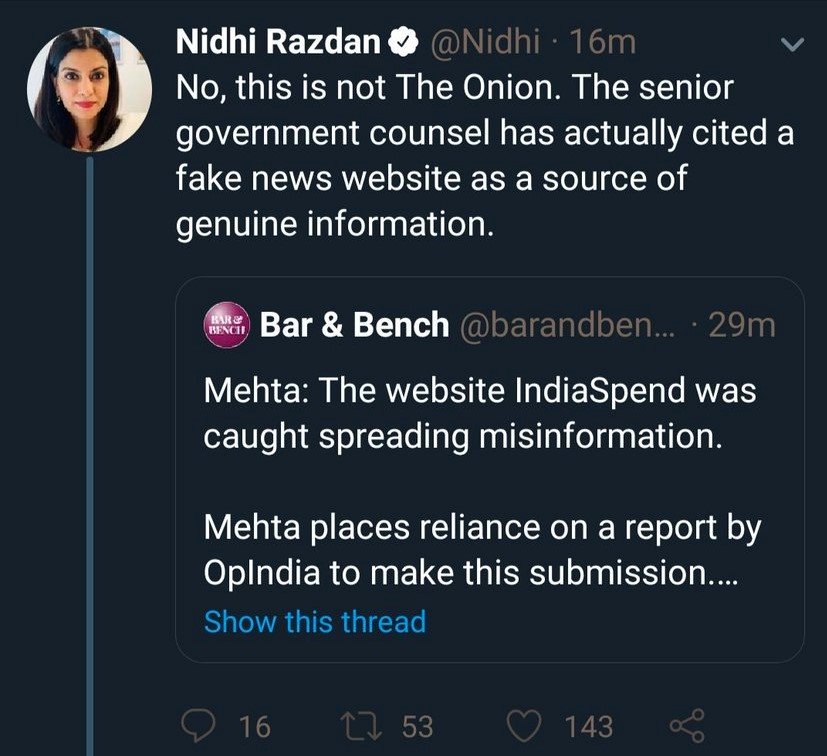 The peak of NDTV’s habit of spreading fake news perhaps was when they conducted an entire debate based on fake news. Inadvertently, Nidhi Razdan and her ilk have also revealed precisely what they mean when they describe something as ‘Fake News’. The liberal definition of ‘Fake News’ doesn’t mean completely false and absurd reports peddled as authentic, it means ‘news that we want to suppress’.

Read: Here is why Prannoy Roy and Radhika Roy were stopped at the airport and were not allowed to leave the country. All you need to know about the NDTV-ICICI scam

Nidhi Razdan was not the only one who suffered a meltdown. Ashok Swain, a rabid hatemonger who commands immense respect among the liberal crowd, was mighty displeased as well. He too described OpIndia as a ‘fake news website’ and called the terrible propaganda initiative IndiaSpend ‘data driven’. The Queen of Hatemongers, Swati Chaturvedi, was not far behind either. She called it ‘utter lunacy’ on the part of the Solicitor General to cite the OpIndia report in the Supreme Court. 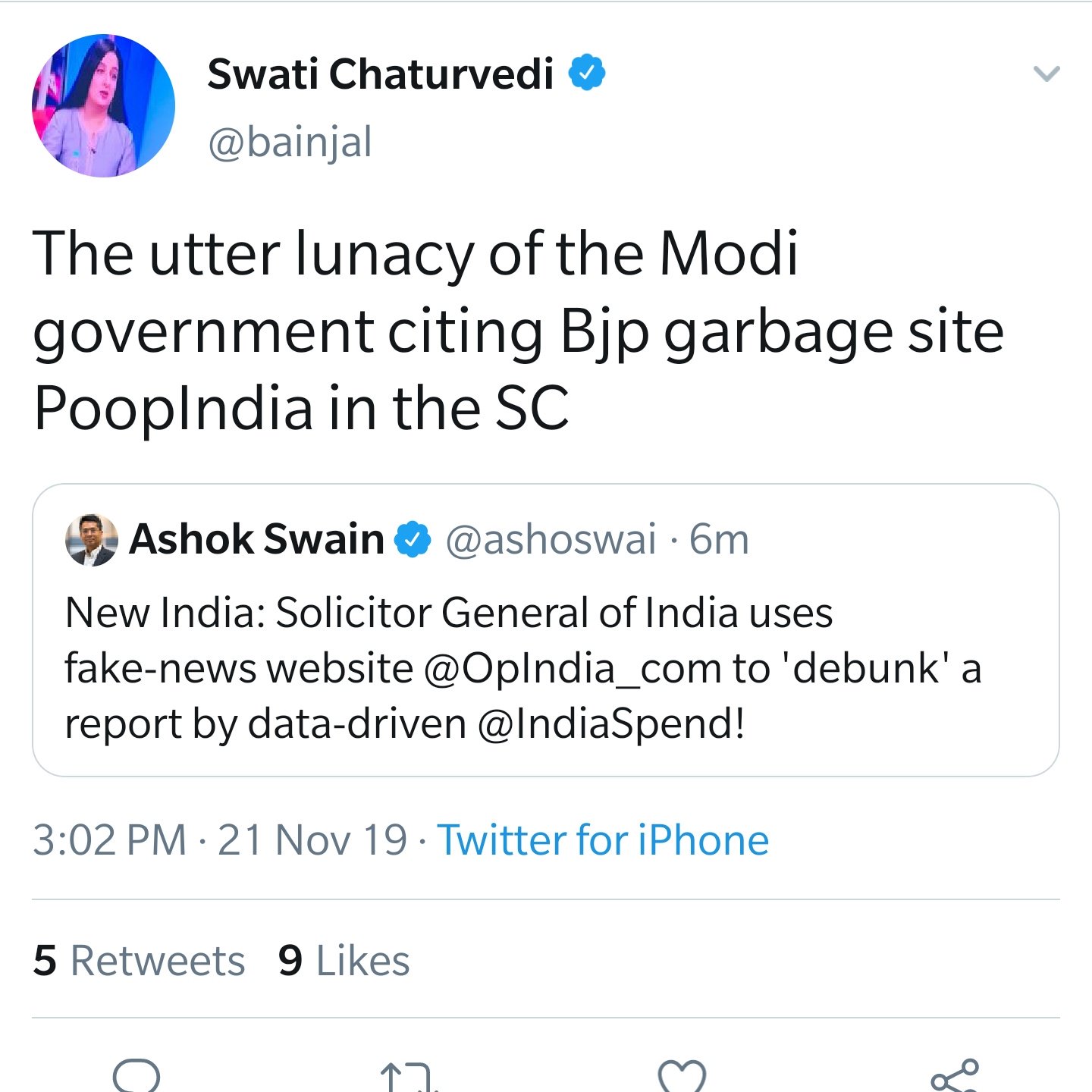 Swati Chaturvedi has her own history of spreading fake news. Known to be abusive, she once tweeted a photoshopped image of Narendra Modi wearing an Arabic attire. On another occasion, she falsely claimed that Amit Shah was apparently sleeping in the Parliament. She has also been credibly accused of plagiarism and on another occasion, she sent OpIndia a defamation notice for reporting facts.

Read: That you have lost readership and your peers doubt you, is not our problem: Read our response to Swati Chaturvedi’s defamation notice

Another person said the same thing. It would have been insignificant in and of itself but it was retweeted by Rohini Singh of The Wire whose hitjob on Jay Shan, the son of Home Minister Amit Shah, got them sued in Court. Not merely that, the Supreme Court also observed that it was ‘nothing short of yellow journalism’. No wonder then, she isn’t too happy with the fact that an OpIndia report was used by the Solicitor General to debunk lies spread by the liberal establishment. 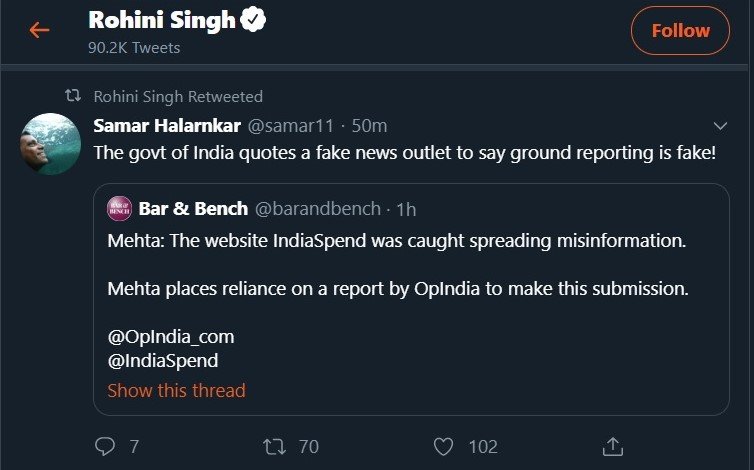 Tehseen Poonawalla was visibly upset and understandably so because it was arguments made by his side that were refuted using the OpIndia report.

I promise you this & one can’t make this up ..To counter our allegations made using data from India Spend on #Kashmir , SG Tushar Mehta counters using @OpIndia_com article on India Spend ! Friends ..This tweet would be funny if it was not such a tragedy ! https://t.co/Gx0qQHXcr4

Vijaita Singh of The Hindu, who cannot distinguish between revenue and profit, questioned the credibility of OpIndia over the matter. Amusingly enough, she works for The Hindu which engaged in a clear and deliberate distortion of facts to peddle a motivate campaign against the Rafale Deal. In the past, Vijaita Singh herself has propagated misleading information and issued sermons when her propaganda was called out.

.@BhallaAjay26 sir hope you are aware about the credibility or lack of it of Opindia! https://t.co/bkiLiOiqIg

Read: The Hindu not only cropped the Rafale dissent note, but also had digitally manipulated it

The meltdown of the liberal crowd over an OpIndia report being used to debunk one of their lies only reveals the twisted definition of ‘Fake News’ in the liberal world. It does not mean what people think it means. According to liberals, ‘Fake News’ are facts they wish to suppress and news they don’t like. And anyone who strives to bust their monopoly over the narrative is labelled as ‘fake news website’ without reason.