2019 anti-CAA protests: 9 visuals that prove they were motivated by deep seated anti-Hindu bigotry and Islamic extremism

The year 2019 saw big-bang decisions from the Modi government. From the abrogation of Article 370 to going all guns blazing against Pakistan sponsored terrorism. With such decisions, some amount of backlash from the Hindu hating Islamists of India was expected. However, with the year ending with the anti-CAA protests, that sentiment has never been 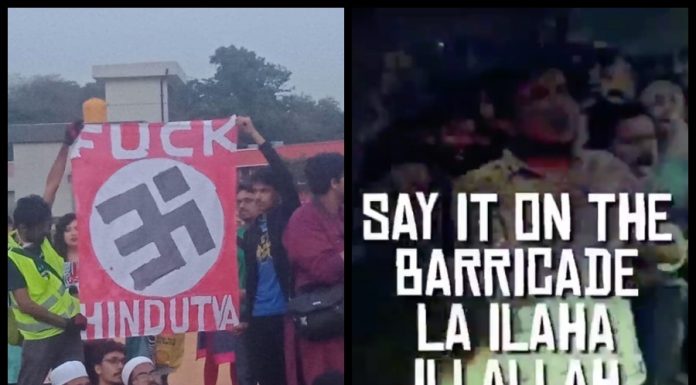 The anti-CAA protests in 2019 brought out into the open the ugly hatred that has been festering in the hearts of liberals and Islamic extremists against Hindus. It was obvious from the very beginning that the protests had nothing to do with ‘Secularism’ but was limited to Radical Islam and anti-Hindu bigotry with active support from the liberal community. In this article, we look back at some placards and videos during which the anti-Hindu bigotry and Islamic Extremism became most prominent.

1. Muslim man threatens to burn the country if CAA is implemented

In the video that went viral on social media, a Muslim man is heard threatening that he will set the entire country on fire. He says the Muslim community will stage a coup and destroy the country.

Anti-CAA protesters raised slogans of La ilaha illallah, the Islamic Shahada which means “There is no god but Allah”. The chant is often followed by muḥammadun rasulu llah, which means “Muhammad is the messenger of God”.

The religious chant represents the central philosophy of Islam, that Allah is the only god, and there is no other god. When senior Congress leader Shashi Tharoor warned against Islamic Extremism after the clip went viral, Islamic Extremists on social media slammed him and accused him of ‘soft bigotry’.

Say it on the barricade
La ilaha illallah

Say it in the tear gas
La ilaha illallah

The anti-CAA protesters appear to hold a severe disdain towards the Prime Minister’s humble roots. There were several placards mocking Narendra Modi for being a Chaiwaala in his childhood to support his family.

One particular placard that was remarkably idiotic tells Narendra Modi to make tea instead of laws. One wonders if the protesters believe the Parliament should not make laws, who according to them has the authority? Delinquents, who loiter around such protests?

The most obvious bit bigotry from the protests was the chants of ‘Hinduon se Azadi’ that were raised in Jamia Nagar, Delhi. Liberals realized that it was indefensible and therefore, they made an attempt to call the video footage ‘fake’.

However, the video was authentic and the so-called peaceful protesters at Jamia Nagar were raising these slogans.


5. F**k Hindutva poster with the Om portrayed as the Nazi symbol

This was another blatant bit of anti-Hindu bigotry. Not even the liberals attempted to defend this one. The only ones defending it were Islamic Extremists and Leftists.

During the anti-CAA riots in Bihar, Muslim rioters attacked and desecrated a Hanuman Temple in Patna.

The visuals did make for a very disturbing view and it was further evidence of the fact that the hatred that was festering in the heart of Indi could no longer be ignored.

In other news, a #HanumanMandir was desecrated in Patna, Bihar by Muslims protesting against #CAA yesterday. pic.twitter.com/jZKgMDrEbo

A video emerged from IIT-Kanpur where anti-CAA protesters were chanting “When All Idols Will Be Removed… Only Allah’s Name Will Remain”.

Read: Idols will be removed, thrones will vanish, only Allah’s name will remain: Complaint against IIT-K’s Jamia solidarity event

Liberals tried to whitewash the bigotry inherent in the verses claiming that it was from one of Faiz’s poems but, as we have said before, slogans that speak of the demolition of Murthis have absolutely no place in the land of idol-worshippers.

A faculty at IIT Kanpur has submitted this video and a complaint to director, alleging anti-India & communal statements made at a recent event held in ‘solidarity with Jamia’ & that event held without permission.

“When All Idols Will Be Removed…
Only Allah’s Name Will Remain” pic.twitter.com/fbmNFwVBiw

A narrative was carefully constructed by the mainstream media that the anti-CAA protesters were waving the Tiranga while the pro-CAA demonstrations were only waving the Saffron Flag. It was an insinuation that the anti-CAA protests were secular while the pro-CAA demonstrations were communal. But as we can see in this video, the Tiranga was merely an attempt to mask their true intentions.

The year 2019 saw big-bang decisions from the Modi government. From the abrogation of Article 370 to going all guns blazing against Pakistan sponsored terrorism. With such decisions, some amount of backlash from the Hindu hating Islamists of India was expected. However, with the year ending with the anti-CAA protests, that sentiment has never been clearer and the fact that the Media has played Nero’s guest while the country was being burnt by Islamists only goes to show that these posters were not aberrations, but the venom being displayed in the open.