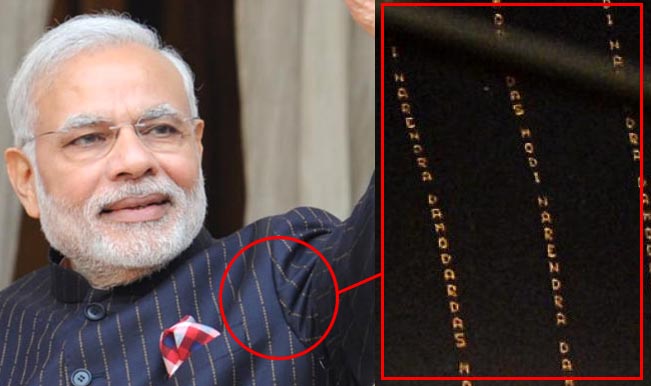 Ever since PM Narendra Modi wore a pinstripe suit with his name monogrammed on it on the Republic Day earlier this year, Mainstream Media and Social Media has been spreading all sorts of stories about the origins of this suit. The most “believed” figure for the suit’s cost is Rs. 10 lakhs, which has been repeated as gospel’s truth by many leading journalists.

OpIndia.com traces how it all started, and how media comes up with “facts”.

Our team went through all the comments and information available in the public as soon as the suit was found to have been inscribed with Modi’s name. The first reaction was terming Narendra Modi a megalomaniac, which was followed by claims that what he did was not new. Many other state leaders had done that, most notably Former Egyptian President Hosni Mubarak.

Soon the commentators tried to find the origins of Mubarak’s suit. And they discovered some news reports from as early as March 2011. Such reports revealed the name of the company that stitched the suit for Mubarak.This particular news report said “According to cloth maker Holland & Sherry, from London’s Savile Row, the stripes may have cost around 10,000 pounds per suit.”

And for some strange reasons, everyone assumed that the company that stitched the suit for Hosni Mubarak, also stitched it for Narendra Modi. This assumption was made mainstream by some foreign press reports.

An article in the London Evening standard, a UK based publication, on 26th January said – It appears that the suit has come from our very own Savile Row, with fabric made by “cloth merchants of distinction” Holland & Sherry. The fabric alone — seven metres required to make a suit — would have cost somewhere between £2,500 and £3,000.

Note the term “it appears“, which means that London Evening Standard had no definite information about makers of the suit. Essentially it had published a report on guess work. Perhaps they wanted to find a British link (note the term “our very own”) to every international event just as our media tries to find an Indian link to every international event.

But that didn’t deter many on the social media, especially those aligned to the Congress party, from spreading this weak assumption it as if it was some gospel truth.

Once spread by Congress allied social media accounts, this was then blindly picked by up Indian mainstream media. A DNA article was one of the first to start this propaganda. Of course, they were ably supported by the usual suspects from Social Media.

Later Rahul Gandhi repeated the claim in run up to Delhi elections, and the figure of 10 lakh became a fact. While certain sections of the media blindly copied the British figures and Rahul Gandhi, Times of India tried to estimate the cost from scratch. In this piece, they said an Indian designer estimated that “cost is anything between Rs 80,000 and Rs 5 lakh, depending on the fabric”. They also claimed that the suit was stitched by Jade Blue, the same company which makes the famous Modi Kurtas.

So as of this stage, our stellar journalists had a range of Rs 80,000 to Rs 10 lakh as the cost of Modi’s suit, and it could have come from London or from Ahmedabad.

Today, it was declared that Modi’s famed suit will be auctioned and the proceeds will go to the Namami Gange Trust Fund for helping fund cleaning of Ganga river. It was also made clear that the suit is among the nearly 363 items that were received as gifts by Modi and Gujarat chief minister Anandiben Patel and that will be auctioned.

This is line with what Modi has been doing for a long time. Much before he became PM, he had raised Rs 89.96 crore by auctioning all gifts he received as Chief Minister and donated this to the Kanya Kelavani Fund.

As to the details of the origins of the suit, it is now revealed that the suit was a gift from a Mr Rameshkumar Bhikabhai Virani. Mr Virani said, “I am from Gujarat. I presented this suit to him (Prime Minister Modi) when I attended the recent Vibrant Gujarat Summit. I gave it while extending an invitation to him to attend my son’s wedding on January 26.”

He also rubbished the claims that it could have cost Rs 10 lakhs saying “My son does not have the guts to spend that kind of money or that amount.”

While the cost of the suit is not yet known, some commentators believe that Modi’s suit “cost” the BJP the Delhi elections. We hope someone catches hold of the tailor who made it as soon as possible. At the time of writing this, the suit had attracted a bid of Rs 1 crore!