What explains the EVM madness of Arvind Kejriwal? Italy. Read to find out 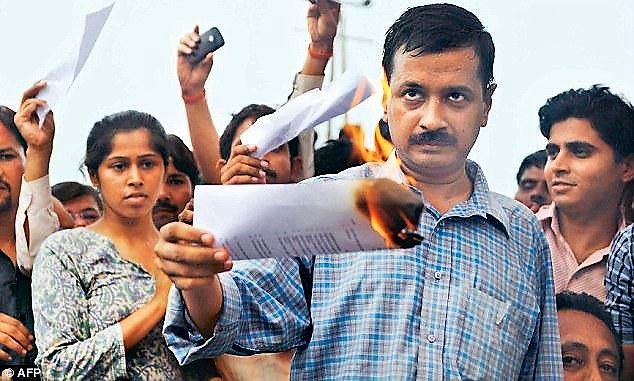 A day before the results of the Delhi MCD elections, Kejriwal held a small meeting with his party members to assess the situation. The exit polls had come in and by all accounts the Aam Aadmi Party was headed for a humiliating defeat.

A time perhaps to reflect on everything that had gone so sour so quickly for the party that had won 67 seats out of 70 just two years ago.

Kejriwal’s response? A passionate threat : “If we don’t win tomorrow, if the exit poll results are true, we will take them apart brick by brick”.

The real imagery of what he said comes out in the original Hindi : “Eent se eent baja denge“.

At that time, this was taken by politics watchers to be a joke, more of the same bluff and bluster that the AAP supremo is famous for.

But what if it wasn’t? What if Kejriwal meant exactly what he said?

Anarchy has always been part of AAP’s DNA. The Delhi Chief Minister, during his 49 day government, had made headlines for proclaiming himself an “anarchist”.

Back then, the Delhi Chief Minister duly received heavy criticism for his “anarchist” remark. But, little attention was paid back then to the ominous subtext of what he was planning to do at that time, a week before Republic Day.

While most people would remember Kejriwal’s dharna of January 2014, it has mostly been forgotten that his original plan was to stop India’s Republic Day celebrations, by flooding Rajpath with lakhs of supporters.

It was never really about corruption. They always had ideas of challenging the authority of the Indian state and visions of overthrowing it. Listen to Rajdeep Sardesai relate how he discussed with Kejriwal about a “Tahrir Square” like event in India.

Back in January 2014, Kejriwal did not go through with his Republic Day disruption plans. Because at that time, he was convinced that he could actually seize power at the Center within a few short months, though legitimate means. He resigned the next month, and AAP decided to fight Lok Sabha elections.

Kejriwal changed his strategy after the defeat. He apologized for resigning; went to the voters with a highly organized ground campaign, promising everyone the moon and requesting one more chance. He even reached out to Modi supporters with AAP trying ‘Modi for PM, Kejriwal for CM’ message. He swore not to leave Delhi for at least 5 years. Paanch saal Kejriwal!

It worked! He was given unprecedented victory in 2015. Power came to him through legitimate means.

Enthused by his huge comeback in Delhi, Kejriwal’s ambition again got the better of him. Delhi was effectively put under Manish Sisodia as Kejriwal began implementing his grand strategy for national domination. Punjab, Goa and Gujarat were named as prime targets.

He was determined. As he was in 2014. This time, his pursuance of power saw him collaborating even with the enemies of the state:

Not to mention that Kejriwal could not curb his natural anti-India instincts and sided with those raising slogans of Bharat ki barbaadi. Worse, he tried to undermine the Army after surgical strikes in September 2016 which made him a hero in Pakistan:

Result we all know.

By now, Kejriwal must have known that the aam aadmi is angry with him. He has been handed humiliating defeats in Goa, in Punjab, and in his home base of Delhi. In Rajouri Garden, the AAP candidate could not even save his deposit. MCD elections saw BJP scoring big victory.

A canny politician would have chosen to lie low, much like Kejriwal himself did after 2014. Right now, Narendra Modi overshadows everyone else in the public imagination. It’s time to consolidate for a long conflict rather than challenge him in open battle.

Then, why isn’t Kejriwal lying low? Why has he become even more aggressive?

Perhaps because he realizes that the gig is up. It’s all over. The people have figured him out. Arvind Kejriwal and his crew has already milked democracy for everything they could have. He’s never going to win an election again. Unlike 2014, it is useless to try. He will not bark up that tree any more.

For Kejriwal, it’s time to bare his fangs.

And what better way to undermine the Indian state than to spread mistrust in our voting machines? Delegitimizing our elected governments is the critical justification that Kejriwal needs to call openly for the overthrow of the Indian state.

Didn’t Kejriwal say “Eent se eent baja denge” ? Perhaps he meant every word of it. Why are we assuming otherwise?

History, of course, provides a warning in the “March on Rome” and we would be smart to read about this event carefully and draw comparisons. In the Italian General Elections of 1921, Benito Mussolini’s party had failed miserably. They had won a mere 35 seats out of 535. This massive defeat caused Mussolini, who had already failed in the 1919 elections, to give up on democratic means to capture power.

Instead Mussolini decided to capture power through sheer force on the street. Some 30,000 fascists were dispatched on a long march on Rome in October 1922. The capital was placed under siege. The Italian state simply folded in face of such ferocity and within a week, Mussolini became the Prime Minister of Italy.

Do you hear today’s protests outside Election Commission offices by the AAP supporters? Do you hear echoes of the impatient man who wanted to flood Rajpath with lakhs of supporters?