As with any violent crime happening anywhere in the country, the police must thoroughly investigate the murder of Gauri Lankesh. The criminals have to be identified, arrested and convicted, come what may.

We as citizens cannot do the job of the police. However, as citizens we should speak out against the deliberate and reckless defamation that the Hindu right has faced from large sections of media, the so called intelligentsia and the so called secular political class as a result of this incident.

Within minutes of the news of Gauri Lankesh’s murder coming in, it looked like the media celebrities and other had already ‘solved’ the crime:

Incidentally they even didn’t use the word “alleged” to try and make things a bit fair. They spoke as if they could see in all directions of time and space inside their heads. The next day there was a clear signal straight from the top:

But this outright conclusion drawing doesn’t appear to be universal as we saw in the cases like that of “suspected” SIMI terrorists:

Also on top of it they were labelled as terrorists, but “activists”. Such inconsistency might lead some to believe that the judgement laden language of certainty is reserved only for speaking against the right wing.

Its almost unreal that throughout the day such attacks continued even when there wasn’t a shred of evidence to show that the murderer had anything to do with Sangh or BJP.  No arrest, not even a single lead. Yet, in the minds of some “intellectuals”, the conviction was complete.

The media conviction of the BJP and Sangh Parivar yesterday was so ludicrous that terms like “kangaroo court” etc couldn’t possibly capture the extent of the fallacy. We can’t even call it “guilt by association”, because there was no known association of the still unknown assailants.

Things went to such an extent that some began bashing the victim’s family when they didn’t seem ready to accept the media’s preferred narrative: 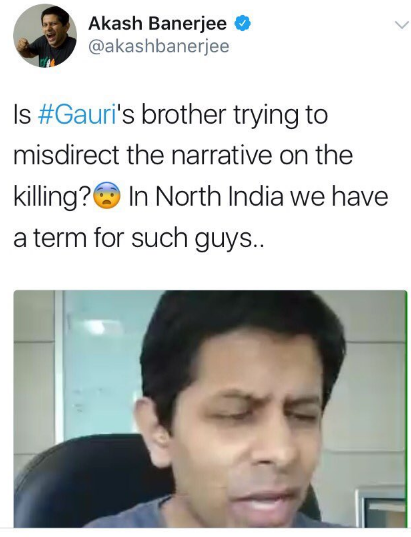 After all that has taken place, the Prime Minister must speak now. He must demand an apology from the media and ‘secular’ political parties for a completely evidence free smear campaign against his party, the cadres of his party, its supporters and its still larger ideological family.

There is a strain of apartheid in the way the right wing was defamed yesterday. When Javed Akhtar says that “one kind of people” are getting killed, it means that the death of right wingers is simply not registering in India’s liberal conscience. 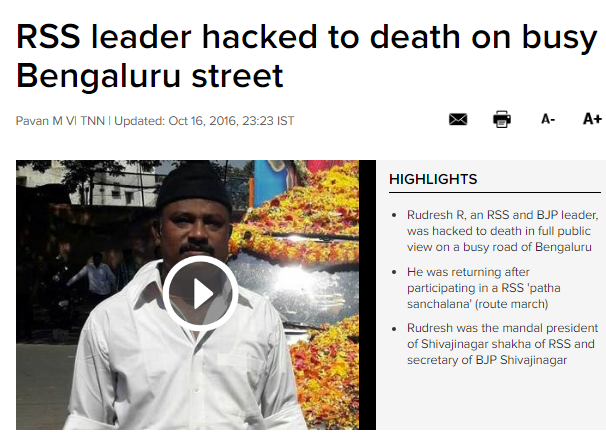 Why are the deaths of right wingers not registering in their consciousness? Is liberal India refusing to recognise right wingers as human beings? There’s no “undeclared emergency” in India. Instead, we have “undeclared apartheid” imposed by the intellectual class. And the Prime Minister must speak up against this apartheid.

Right wing ideology is being blamed even when nobody has a single clue who the killers are.

I am yet to see left wing ideology blamed despite repeated massacres carried out by left wingers in the forests of Jharkhand, Odisha and Chhattisgarh.

Modi must speak. His party, his supporters and his entire ideological family have all been defamed. He has to stand up for the honor of the millions of innocent Hindu right wingers who have been recklessly maligned. He has to speak up for truth and justice.