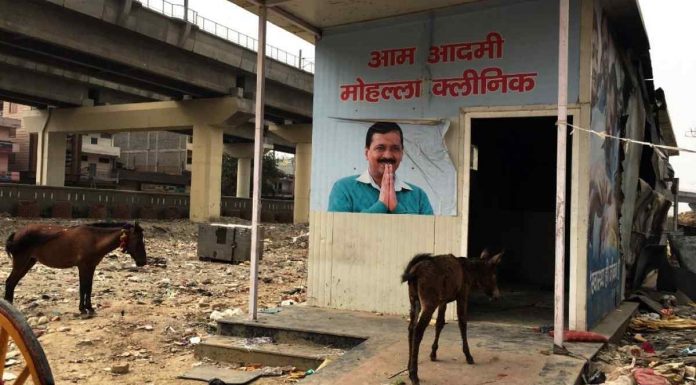 While travelling by air yesterday, Delhi CM Arvind Kejriwal had the unfortunate opportunity to overhear a discussion where his govt’s pet scheme Mohalla clinic was being criticised. A video of the incident has gone viral on social media, where one person seen telling the Delhi CM that mohalla clinics are not in working condition.

The video was posted by a Twitter user named Nishant today, saying that he was also present in the flight, and he had a discussion about Mohalla Clinics with the Delhi CM’s PA. In the video, it can be seen that Arvind Kejriwal is sitting on the window seat of the economy class flight, while his aide who was talking to Nishant is sitting on the aisle seat of the same row, with another companion in the middle seat.

Yesterday travelled with @ArvindKejriwal .. had a discussion about mohalla clinic with his chamcha (PA) . pic.twitter.com/dCz6frrRZV

After boarding the flight, the person travelling with Arvind Kejriwal started a live video stream on a social media site, saying that the Delhi Chief Minister is travelling economy class like an ordinary person. He also added that broom will win this time, referring to the symbol of the Aam Aadmi Party.

Hearing this, Nishant said to him, but in Lok Sabha elections the lotus will bloom. Responding to that, Kejriwal’s aide is heard saying “have a look at the Mohalla clinic project in Delhi”. To this Nishant replies, ‘Mohalla clinics are seen, but they are all closed. They are not in working condition, CM sir is also here with us’, implying that he was trying to communicate with the CM.

Such a negative statement about the scheme, which the Aam Aadmi Party claims has won international acclamation, left the person stunned and unable to give a proper reply. Instead, he brushes it off saying that everybody has their own opinion. After that Nishant directly addresses the Delhi CM by saying, ‘I am telling the chief minister that Mohalla clinics are not in working condition’.

Both Arvind Kejriwal the other person in the middle seat didn’t show any reaction to this open feedback about the Mohalla clinic project. They were concentrating on their phones and it is not clear whether they were paying attention to the conversation happening next to them.