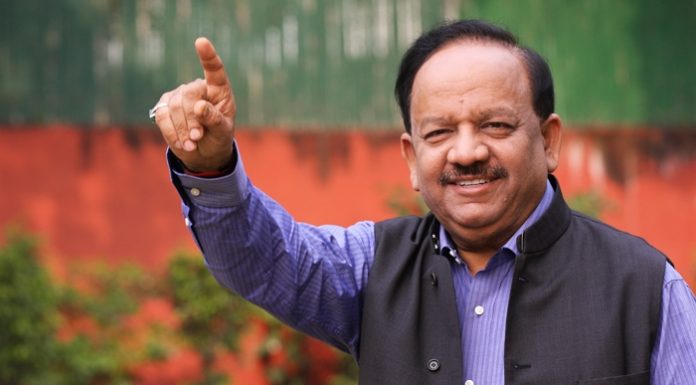 This is an analysis of the performance of Science & Technology, and Environment minister Dr. Harsh Verdhan in this series on ministers of Modi government.

Dr. Harsh Verdhan is a member of RSS since young age. He is ENT surgeon by profession. In 1992, he was first elected as MLA to Delhi Legislative Assembly, and was reelected in 1998, 2003, 2008 and 2013. He was first elected to Loksabha in 2014, from Chandni Chowk constituency in Delhi, by defeating senior Congress leader Kapil Sibal. He continued his ENT practice while being in politics, albeit in low profile due to constant responsibilities of public office. He is a pioneer of Oral Polio Vaccination (OPV) program in India. As Minister for Health of NCT of Delhi, he first implemented program of mass immunization, against polio in Delhi successfully in 1993. In 1995, this program was implemented nationally.

The ‘Polio Ravivars’ we see today is a brainchild of Dr. Harsh Vardhan, where a particular date is selected for immunizing all children under 5 against Polio. Due to the success of this program, and continuous efforts by the government, India was declared polio-free country in 2014. In 1997, he was instrumental in passing the Delhi Prohibition of Smoking and Non-Smokers Health Protection Act, in Delhi Assembly, which was one of the first anti-tobacco laws, implemented by any state government.  Under this law, smoking was prohibited in public places. It also prohibited the sale of smoking substances, such as tobacco and bidis to anyone below the age of 18. Tobacco products could not also be sold, or stored within 100 meters of any educational institution. This law was also later enacted at the national level.

Let’s have a look at the achievements of Dr. Harsh Vardhan.

Nakshe portal – Topographic maps or Open Series Maps (OSM) containing natural and man-made geographical features, including terrain or topography have been  made available for free download, from “Nakshe” web portal in PDF  format through Aadhar enabled user authentication process, in line with Digital India program of the Government of India.

SERB Distinguished Investigator Award – A new scheme called SERB Distinguished Investigator Award (SERB-DIA) was approved for early identification, and empowerment of exceptional scientists. The scheme aims to recognize, and reward the young scientists who have performed extraordinarily well, in the SERB supported projects, under its Extra Mural Research scheme, but are yet to reach the stage of advanced professional recognitions, like SS Bhatnagar awards/ JC Bose fellowships etc. The awardees will receive honorarium of Rs 15,000/- per month, for a period of 3 years, and will be awarded a project to further develop their research.

TARE (Teacher Associates for Research Excellence) Mobility Scheme – TARE has been formulated and approved by SERB, which aims to activate the latent and unused R&D capacity in our colleges, and state universities that lack science and technology infrastructure and culture. The TARE scheme allows undertaking of part-time research by the faculty, working in a regular capacity in State Universities or Colleges by integrating them in academic institutions such as IITs, IISc, IISERs, National labs, etc. located in the same city where the faculty member is working.

MANAK (Million Minds Augmenting National Aspiration and Knowledge) – In line with the Start-up India initiative of the government, MANAK scheme has been initiated to foster culture of scientific innovation among school children of class 6th to 10th. This scheme is aimed to broaden the base of innovation pyramid, to produce future entrepreneurs in large numbers. The program has been targeted to encourage children to visualize, and analyze needs of the society inspire them, to devise innovative ideas to address them.

Materials on Energy Storage (MES) – MES program is to support Research and Development activities, aimed at innovative materials for energy storage, and to build energy storage device, with enhanced output for multifunctional applications. Efficient use and further increase of renewable energy, and demonstrating its value in terms of flexibility, in the energy systems are the prime objective of the initiative. 18 out of 130 proposals received were approved for funding.

SERB now 100% online – Science and Engineering Research Board has become 100% online, for processing of all proposals under its various schemes. This has helped thousands of scientists to submit their proposals, and see the decisions online without wasting time in paper correspondence. This has also improved the speed of decision making, and transparency, on the submitted proposals.

Online Processing of INSPIRE – Innovation in Science Pursuit for Inspired Research (INSPIRE) program which has 5 components and enrolls nearly 1.5 lakhs students every year. It has now completely made online, right from submission of application to release of scholarships/ fellowships etc. to every student under the scheme through web-based system. It is completely functioning in online, and paperless mode since Modi government assumed power at the centre. Students from across the country applying for INSPIRE are now saved from hassles of offline mode.

An online web-based system has been introduced, for Fund for improvement of science and technology infrastructure (FIST) scheme which supports R&D infrastructure. Processing of proposals, right from submission of applications, to release of funds to the departments and colleges, has now  become easily accessible, and transparent with this initiative.

Greater Access of High-end Equipment/Facilities – A common web portal is being developed, which will be populated with the name of high-end equipment, and facilities available with the institutions and universities and their online booking, and use in a transparent way. This will facilitate researchers/ students the access of these facilities.

India Science & Technology (S&T) Portal – Development of an ambitious India S&T Portal has been initiated, with the objective to provide one stop information center to school students, scientists and the society at large on various schemes and programs, activities, and major achievements in Science and Technology (S&T). This would be a 360-degree view and connect to all the stakeholders and activities of S&T in India.  An internet-TV channel on S&T, is also in the advanced stages of planning and execution. Currently, systems are being set up for production of contents.

Intended Nationally Determined Contribution – India declared its Intended Nationally Determined Contribution (INDCs) in the run to COP-21 at Paris Climate Change Conference in December 2015. According to INDC India will reduce the emissions intensity of its GDP by 33 – 35% by 2030 from 2005 levels, which can be termed as significant. Ujjwala Yojana, E Vehicles, LED Bulbs are the schemes launched by government to fulfill its commitment at Paris Climate Change Conference.  India has also committed to increase its tree cover, to create additional carbon absorption of 2.5 to 3 billion tonnes of CO2 or equivalent gases.

Construction & Demolition Waste Management Rules were notified for the first time.   Under these rules, duties have been separately earmarked for waste generators, service providers and contractors, state government and local authorities, CPCB and SPCBs and duties of concerned central ministries.

Air pollution has increasingly been becoming a serious concern, predominantly for health of the people. The impact of air pollution is not limited to health, but it gets extended to agriculture and general well-being of human, floral and faunal population. Therefore the government has formulated the National Clean Air Program (NCAP) as a long-term, time-bound national-level strategy to tackle the increasing air pollution problem across the country in a comprehensive manner. The overall objective of the NCAP is a comprehensive management plan for prevention, control and abatement of air pollution besides augmenting the air quality-monitoring network across the country. City-specific air pollution abatement action plan for 100 polluting cities of the country similar to one for Delhi, have been formulated under the NCAP. Increasing number of monitoring stations, data dissemination, public participation on planning and implementation, setting up of Air Information Centre for data analysis, resource apportionment studies, setting up of national inventory are key components of NCAP. Guidelines for indoor air pollution and setting up of rural monitoring stations not addressed till date as some of the key components under NCAP.

The author is journalism pass out from Indian Institute of Mass Communication, New Delhi. After dangerously flirting with the idea of left during his IIMC days, due to the proximity of the IIMC with JNU, a den of radical leftists, he became firmly aligned to right after realizing the futility of the left. He tweets at @kpophale.