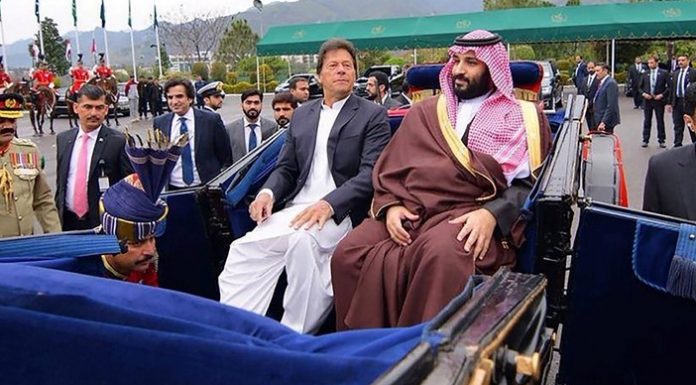 Pakistan Prime Minister Imran Khan arrived in Washington on Saturday and is set to have a meeting with US President Donald Trump on Monday. Reports now suggest that the meeting between the two was arranged by the direct assistance of the Saudi Crown Prince Mohammed bin Salman.

According to the report, two officials said on Saturday that, Crown Prince Salman had played an “instrumental role” in paving the way for the Khan-Trump meeting.

As reported by The Express Tribune, Prince Salman used his personal contact with Jared Kushner to arrange the invitation for the Pakistan Prime Minister. Kushner is Trump’s son-in-law and also his senior advisor.

Efforts were on to arrange the meeting in December last year after Trump wrote a letter to Imran Khan. He sought Pakistan’s assistance in enabling the Afghanistan peace process. According to an official Imran Khan wanted to have face-to-face interaction with the President to dispel any misconceived notions he might have had about Pakistan.

But the strained relationship between the two countries proved to be a stumbling block. Pakistan then decided to bypass the US bureaucracy by contacting Trump directly using Jared Kushner.

Knowing the personal relationship between Kushner and Prince Salman, Imran Khan had arranged several meetings with the Saudi Crown Prince. Sources say that the Prince used his ‘good offices’ to convince Trump for the meeting.

The report also says that Republican Senator Lindsey Graham must also be credited for the meeting between the two. Graham after his visit to Pakistan in January said that he was impressed with the vision of Prime Minister Imran for Afghanistan and the region. Sources say that the Pakistan Foreign Minister had kept in touch with Graham, who made personnel request to Trump for extending an invitation to the prime minister.

Currently, Pakistan is undergoing a severe economic crisis. Last month its military had to trim down its defence budget. Pakistan is also on the verge of getting blacklisted by the FATF, terror finance watchdog, for failing to act against terror groups.

In November last year, at the direction of President Trump, the US had suspended $1.66 billion in security assistance aid to Pakistan. The decision had come days after Trump statements slamming Pakistan of not doing ‘a damn thing’ for the US, alleging that its government had helped Al-Qaeda chief Osama bin Laden hide near its garrison city of Abbottabad.

Pakistan hopes that the meeting with Trump would help in boosting ties and bringing investments into the country. However, a US Congressional report has said that the security assistance to Pakistan would remain suspended pending “decisive and irreversible” action against terrorist groups.

It is interesting to note that while Pakistan is eagerly waiting for the meeting, Pakistan PM was humiliated by the US as Imran Khan was welcomed by low-key officials at the airport. Also, there were no limousines waiting at the tarmac to ferry the visiting dignitary which is common for such visits by heads of foreign governments. Imran Khan had to take an airport bus to move from the aircraft to the terminal. Besides this, he flew on a commercial flight operated by Qatar Airways instead of the national carrier Pakistan International Airlines.