Union Cabinet approves creation of the post of Chief of Defence Staff, to be a four-star General and head of the Department of Military Affairs 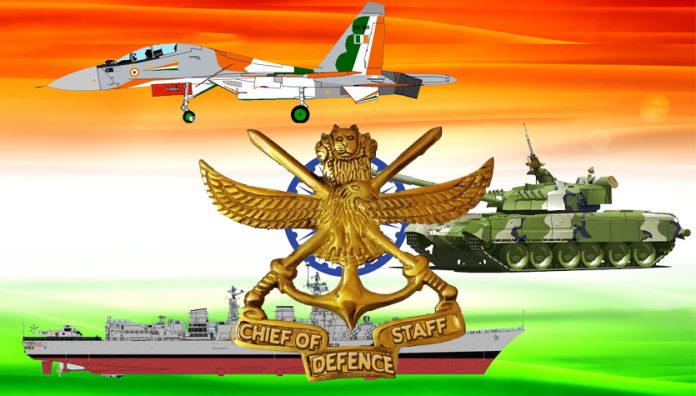 In a landmark decision to reform the top-level defence management of the country, the Union Cabinet today approved the creation of the post of Chief of Defence Staff. The CDS will be a four-star General with the salary and perquisites equivalent to a Service Chief. A statement issued by the press information bureau said that the Chief of Defence Staff will also head the Department of Military Affairs (DMA), which will be created within the Ministry of Defence and function as its Secretary.

The DMA headed by the CDS will deal with the matters of the three armed forces which are the Army, the Navy and the Air Force, the Integrated Headquarters of ministry of defence which includes the three service headquarters along with the defence staff headquarters, the Territorial Army, works related to the three forces and procurement exclusive to the defence forces except capital expenditure.

The mandate for the Department of Military Affairs includes promoting joint procurement, training and staffing of the various defence services through joint planning and integration of requirements, restructuring of Military Commands for optimal utilisation of resources by bringing about jointness in operations, including through establishment of joint/theatre commands, and promoting use of indigenous equipment.

Apart from heading the DMA, the Chief of Defence Staff will also be the permanent chairman of the Chiefs of Staff Committee. The CDS will act as the Principal Military Adviser to the Defence Minister on all tri-Services matters. But the three individual Chiefs will continue to advise the minister on matters exclusively concerning their respective Services, and CDS will not exercise any military command over the three Service Chiefs. This will enable the CDS to provide impartial advice to the government, the statement said.

The functions to be performed by the CDS includes the administration of tri-service organisations. Tri-service agencies/organisations/commands related to Cyber and Space will be under the command of the CDS. The CDS will be member of Defence Acquisition Council chaired by Defence Minister and Defence Planning Committee chaired by NSA. He will also function as the Military Adviser to the Nuclear Command Authority.

The Chief of Defence Staff will bring jointness in operation, logistics, transport, training, support services, communications, repairs and maintenance, etc of the three Services, within three years of the first CDS assuming office. He will ensure optimal utilisation of infrastructure and rationalise it through jointness among the three services.

The CDS will also implement a Five-Year Defence Capital Acquisition Plan (DCAP), and Two-Year roll-on Annual Acquisition Plans (AAP), as a follow up of Integrated Capability Development Plan (ICDP). He is expected to bring reforms in the functioning of three services aimed at augmenting combat capabilities of the Armed Forces by reducing wasteful expenditure.

The most important aspect which had created a lot of speculation was whether the CDS will be a five-star general or four-star general. A five-star General as CDS is superior to the three service chiefs who are four-star officers, a true chief of the entire defence force of the country. On the other hand, a four-star General has the same rank as the three chiefs, but is considered first amongst equals. Now the government has decided to go with the second option with a four-star general being the CDS. This means the CDS will not have direct command over the three services. The Naresh Chandra task force, formed to review the recommendations of the Kargil Review Committee, had also suggested the creation of CDS with four-star rank.

After the creation of the post of Chief of Defence Staff, it is expected that the post of Chairman of the Chiefs of Staff Committee will be abolished. This post was formed in 2001 as a compromise as the creation of CDS was facing hurdles due to opposition from some sections. At present Air Chief Marshal Birender Singh Dhanoa is the Chairman of the Chiefs of Staff Committee.

The government will announce the name of the first Chief of Defence Staff of India soon. It is speculated that Indian Army Chief General Bipin Singh Rawat is likely to be appointed as the country’s first CDS.