NDTV Editor Ravish Kumar was exposed by netizens for spreading misinformation on the anti-Hindu riots after he had identified Mohammad Shahrukh, the February 24 shooter who fired at Delhi Police personnel as 'Anurag Mishra'. 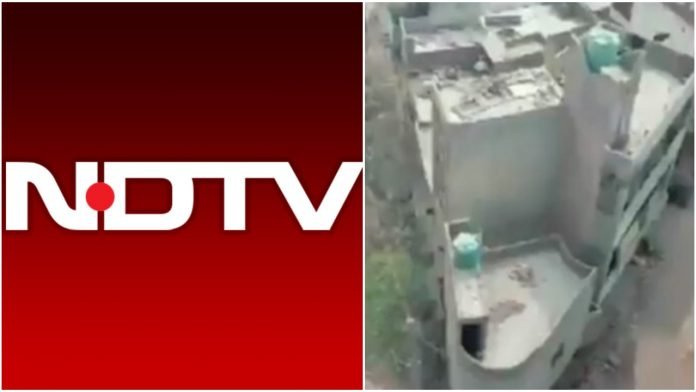 On Thursday, the Delhi police released visuals from the riot-hit parts of northeast Delhi which were earlier captured in drone cameras during the anti-Hindu riots.

The drone cameras were pressed into service by the police in the violence-affected neighbourhoods of east Delhi. ANI had shared one such video with drone footage obtained from Delhi police.

#WATCH Drone visuals from violence-affected North East Delhi. There has been no fresh incident of violence in the last two days. (Source: Delhi Police) pic.twitter.com/Bq6nQ9lKZp

In one such video, it can be seen that heaps of stones stored on the terrace of a mosque in the riot-hit area. Not only mosques but large heaps of stones were stored on the terraces of various residences, which can be clearly seen in the video indicating that the Muslim mobs had meticulously planned for the anti-Hindu riots by strategically placing arms and ammunitions to unleash violence against the Hindus.

It is pertinent to note that similar stones and petrol bombs were also found on the rooftop of AAP leader Tahir Hussain’s house. Tahir Hussain is now accused of murdering IB employee Ankit Sharma and also instigating anti-Hindu riots in Delhi.

At 1:10 minute into the video, it can be seen that a large heap of stones are seen gathered on a rooftop in the video at the bottom-right corner of the screen. The building with stones can be identified as mosques as minarets are clearly visible. However, left-wing portal NDTV – which has a history of absolving even Islamic terrorists from their crimes, on Thursday resorted to rescue Muslim mobs by watering down the crime by carefully editing the mosque out of the drone video.

In a report titled, ‘Drones Monitoring Situation In Violence-Hit Delhi Areas’, NDTV cropped images of the mosque to mislead the readers on the real nature of the anti-Hindu riots and tried to hide the images where it can be clearly seen that the local mosques had stored stones to attack the Hindus during the communal riots. As pointed out by Twitter user @iMac_too, the featured image of the report was credited to ANI, but the Mosque was missing.

Interestingly, NDTV cannot even claim that they just chose a different frame for their screengrab. The ANI video showed only one frame of the particular footage where a Mosque, a lane of buildings, two roads and a small group of policemen are visible. However, NDTV’s featured image of the report has taken special care of editing out the Mosque that had stones piled up on its rooftop.

NDTV has a curious habit of whitewashing Islamic crimes. Just recently, the controversial Congress-era channel was caught red-handed spreading fake news to not only absolve an accused Shahrukh for his crimes but had instead falsely referred to him as Hindu to peddle their anti-Hindu agenda. Shahrukh caught on camera firing bullets at a police officer during the anti-CAA riots.

NDTV Editor Ravish Kumar was exposed by netizens for spreading misinformation on the anti-Hindu riots after he had identified Mohammad Shahrukh – the February 24 shooter who fired at Delhi Police personnel as ‘Anurag Mishra’.