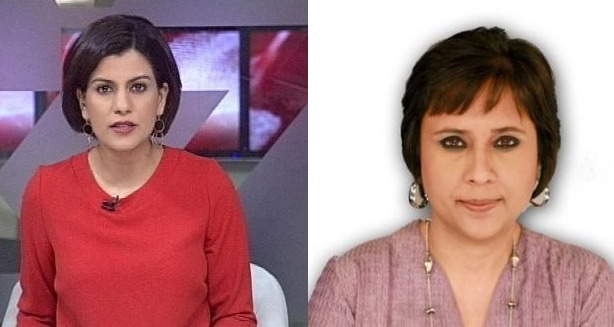 On Sunday we had reported how Barkha Dutt who had officially quit NDTV in Jaunary 2017 had completely distanced herself from the tax woes, her previous employers are currently embroiled in. We detailed how all was not well between her and NDTV and that the parting was not as amicable as people once though it was.

Barkha Dutt had not just not defended the NDTV against the allegations, she had actually retweeted many tweets which exposed the channel’s sorry state of affairs. When social media users wondered whether her account was hacked, she just replied with a beguiling smiley face.

The uneasiness between her and the NDTV was further exposed today when she and Nidhi Razdan had an open war of words on Twitter.

The Outlook magazine today carried a news report about NDTV sacking 70 employees with the explanation given that, the company was shifting to #MoJo. In the article it was detailed that MoJo stood for Mobile Journalism and that NDTV had started to shift to this format using high end phones in the last 5-6 months.

#NDTV Fires Around 70 Staffers, Editors Say The Company Is Shifting To #MoJohttps://t.co/voyMhHBIuA pic.twitter.com/PkaSHtY3JD

Barkha Dutt took exception to the phrase #MoJo as it apparently was similar to the brand she claims to have created after she quit NDTV:

Ndtv finance woes apart isn’t it wrong to appropriate someone’s brand name & new form of journalism as yours ? Thoughts in this thread https://t.co/nlbhl3MWNL

She tried to claim ownership of the brand and also pointed out that she had carried out various town halls featuring celebrities like Karan Johar and Sri Sri Ravi Shankar under that name. She also stated that all the social media accounts of her venture were registered under that banner:

I launched #Mojo@themojo_in shortly after my exit from NDTV , our first few events have happened under this banner- something NDTV aware of

She also claimed that NDTV had started a show called MoJo:

Am told NDTV now has show called #Mojo. So guess @themojo_in should run a show called We The People. Or is copyright only for media barons?

She then argued that:

If NDTV argues #Mojo generic name then so should be We The People from the Constitution. So NDTV will let me start a show by the same name?

This incidentally elicited a response from her ex-colleague Nidhi Razdan:

She then indirectly accused Barkha herself of not coming up with an original idea:

Mobile Journalism or MoJo is incidentally a way to create content on Mobile which includes shooting clips on phone. This is a lot cheaper than the equipment which is used to create content in the conventional way. Nidhi argues that the term MoJo has been in prevalence for a long time before Barkha started using it as her brand name. And its true, articles from September 2016 and even as as old as 2009  contain the use of this term. The phrase is so prevalent that even a MojoCon is held every year.

But even though Barkha hasn’t yet responded directly to Nidhi, she did tweet this before Nidhi had come up with her argument:

If #Mojo is a widely used short form, many other words/phrases are generic too-Buck Stops Here, for one. So, can i do a show by same name?