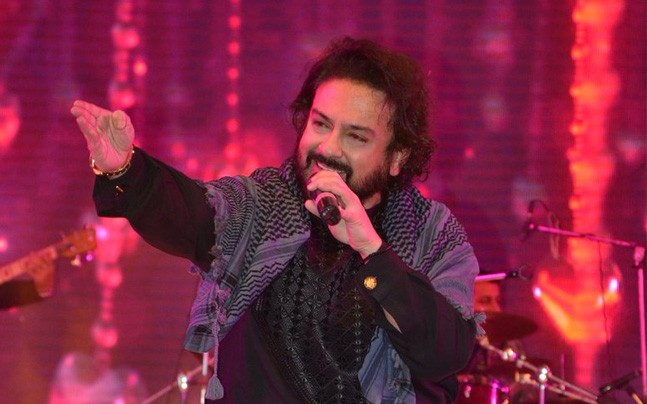 Thank you for the vindication @jkpdp because I haven’t forgotten what you said about the #ZubinMehta concert. Enjoy your evening all of you. https://t.co/X7rUtQxBn8

Meanwhile, photographs of the venue before the start of the event, with empty seats started making rounds on social media.

Empty seats at Adnan Sami Concert and we are past the scheduled Start time. PR disaster for JK govt led by @MehboobaMufti pic.twitter.com/v2bBGTRNoa

Soon, Abdullah tweeted what a pity it is to see empty seats in the concert.

That’s a real pity. I hope people have filled those seats now. For an evening they can let the music transport them to a more peaceful place https://t.co/4DJJNFCfQG

Referring to the 2013 Zubin Mehta concert in Kashmir, where Peoples Democratic Party (PDP), which was in the opposition had dismissed the concert which ended on a sour note, Abdullah, who was the Chief Minister then, made a snide remark.

🙂 couldn’t have said it better myself Nasir.

Sami replied to this with pictures of a jam-packed concert, lightheartedly telling Abdullah to ‘grow up’

Bro ur a former CM..U shouldn’t be so unnerved by a music concert. U obviously have bad sources who lie 2 U – HERE are d photos!!??#GrowUp pic.twitter.com/RPB6NbFqaP

But Sami’s response got him a little rattled.

How does hoping you have a houseful suggest I’m unnerved? I’m glad people got to enjoy an evening of music. I used to like yours at one time https://t.co/AaP3L4KPgf

That is when Sami upped his attack on the former J&K CM and called him a sadistic sore loser.

Oh please Omar! U retweeting ppls photos like a sadistic sore loser speaks volumes of ur lack of stature & pettiness. Up ur game- Its music!

Abdullah got into a defensive and asked Sami if this reactions on social media is worth the ‘gossip piece’ it may lead to? Sami, however, ended up giving him a lesson or two on how music should be above politics.

Ur fickle mind shud know that its not about being a Star. It’s about coming together for the purpose of promoting peace, luv & harmony. GN

Like you said right in the beginning – I am a former CM & so I’ll ignore yr 7-8 insults in 3 tweets.Thanks for coming to Srinagar.Stay safe

However, Abdullah got a lot of flak for his snide ‘stay safe’ parting note to Sami.

Oh boy! Trust me @OmarAbdullah , @AdnanSamiLive is vry much safe in Srinagar! Our @adgpi is guarding the soil, whether u like it or not. https://t.co/gyXmr8bxzf

@OmarAbdullah We can smell ur intention behind ‘stay safe’ drama. What can expect from a stone pelters head? Don’t u worry.Allah is with him

This was unwarranted @OmarAbdullah !! Atleast enjoy that music concert cld b organised in a valley where stones n bullets r the usual noise

One thing is clear: Adnan Sami is not one to take things lightly.