Reportedly, Desai, also faced severe protest after she landed in Mumbai Airport. She was stuck again in the airport after she faced protest from people gathered outside the airport to oppose her decision to visit Sabarimala. 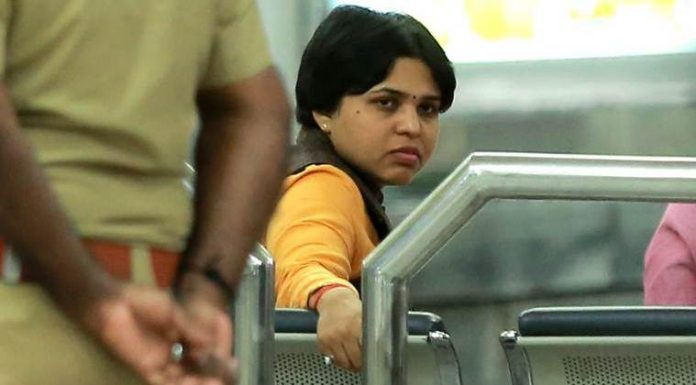 Ayyappa Karma Samiti organized a ‘Namajapa Yatra’ in front of Trupti Desai’s home in Pune on Friday. The leader of the Bhumata Ranragini Brigade was stuck at Kochi airport at the time.

Nandkumar Nayar, president, Ayyappa Karma Samiti, told Hindustan Times, “We are gathered here to protest against move taken by Trupti Desai. It is wrong to use gender discrimination in terms of the Sabarimala temple because there are many temples in Kerala where men are also not allowed during certain periods.”

Babu Nambiyar, another member, said, “Kerala state government has submitted a review petition and the hearing is scheduled for January 22. The matter is subjudice. Hence, Desai should not take any such decision which is against of law.”

Trupti Desai had arrived at Kochi yesterday in her bid to desecrate the Sabarimala Temple. But she faced strong protests from devotees of Lord Ayyappa. Taxi Drivers had also refused to render their services while some said they also offered her a return ticket. In the end, she was forced to return to Pune after she was unable to leave the airport for hours. However, she promised to return using ‘guerrilla tactics’.

Reportedly, Desai, also faced severe protest after she landed in Mumbai Airport. She was stuck again in the airport after she faced protest from people gathered outside the airport to oppose her decision to visit Sabarimala. However, she and the other women were escorted out with the help of Central Industrial Security Force (CISF) jawans and Mumbai police personnel.

Recently, the Kerala government with the help of state police force had turned the area near Sabarimala into a war zone after some devotees had clashed with the police. The Kerala police had reportedly resorted to stone pelting and lathi charging against devotees after situation went out of control. Soon after that, the Kerala High Court while hearing a petition seeking to restrict entry of non-Hindus in Sabarimala temple, had expressed its displeasure over the police excesses at the Sabarimala temple.