EC has also transferred two top officials of the West Bengal government for interfering in elections in the state.

Following the widespread violence observed during the elections in West Bengal, the Election Commission has taken the unprecedented step of cutting short election campaigning for the seventh phase of Lok Sabha election in West Bengal.

Polls are scheduled to take place in nine Lok Sabha constituencies in West Bengal in the seventh and last phase on 19th May, and campaigning in those constituencies was to end on 17th May as per rules. But keeping in view of large scale violence in the state, the poll panel has decided that no campaigning will be allowed in the nine seats after 10 PM on 16th May, thereby cutting short the campaign by 24 hours.

Addressing a press conference, the delegation said that this is probably the first time that ECI has invoked Article 324 in this manner but it may not be the last in cases of repetition of lawlessness and violence which vitiate the conduct of polls in a peaceful manner. Referring to violence during the roadshow of BJP president Amit Shah yesterday, the Commission said that it is deeply anguished at the vandalism done to the statue of Vidyasagar, and it is hoped that the vandals are traced by the state administration.

In a press released by the poll panel, it said that the Deputy Election Commissioner in charge of West Bengal visited the state on 13th May and took stock of the preparedness of polls in all nine constituencies that go to poll on 19th May. During the review, it was found that, “there is distinct resistance and non-cooperation from the district administration and district police when it comes to providing level playing field to all candidates for campaigning and in providing a fearless threat free environment to the voters. The Observers pointed out that while on the surface everything looks fine, but in their frank interactions with the public the fear psychosis that is widely prevalent comes out. They pointed out that utterances of the AITC senior leaders on the lines of ‘Central Forces will leave after the elections while we will remain’ sends a chilling message among the officers as well as voters alike.” 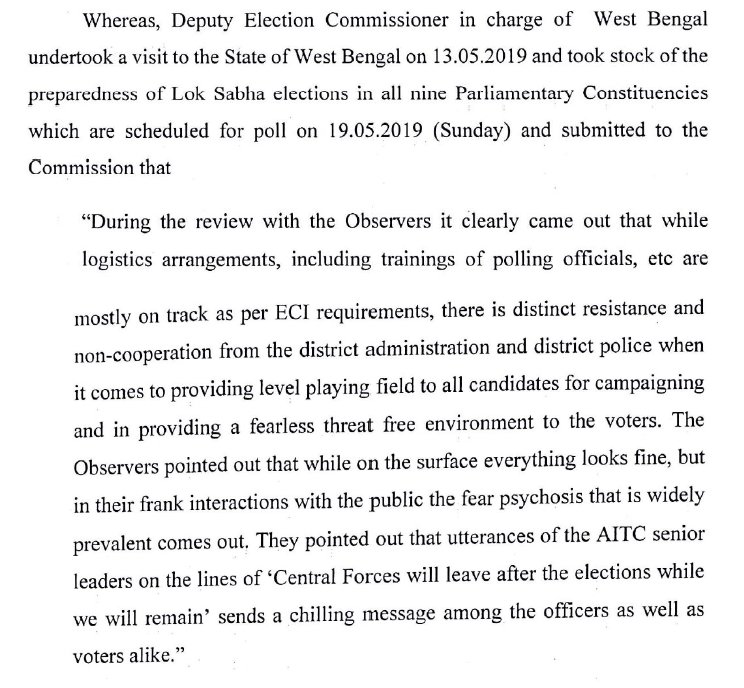 The press release said, “during last 24 hours representatives of various political parties have met the Commission and expressed their concerns on the prevailing conditions of law & order, and campaign related violent incidents are creating an atmosphere of fear and hatred in the polling areas which is affecting the overall electoral environment”.

It said that the “Commission is concerned about the safety and security of the general electors who have a right to access to the campaigns of all the political parties/ candidates in free, fearless and conducive environment”.

Considering the situation in West Bengal and based on the power vested on the commission under article 324 of the constitution and other laws, rules and court judgements, the Election Commission decided to end the campaigning in West Bengal 24 hours ahead of schedule. Along with this, the EC has also transferred two top officials of the West Bengal government for interfering in elections in the state.

EC: ADG CID, Rajiv Kumar stands relieved and attached to MHA. He should report to MHA by 10 am tomorrow.Principal Secy,Home &Health Affairs WB govt stands relieved from his current charge immediately for having interfered in process of conducting polls by directing WB CEO. pic.twitter.com/2AOEbIX7uR

Shri Rajeev Kumar, JPS, ADO, CID, is relieved from his duties and transferred to Ministry of Home Affairs, and he is asked to join his duties in Delhi on 16th May. Shri Atri Bhattacharya, Principal Secretary, Home & Hill Affairs has also been relived from his post for having interfered in the process of conducting the election by directing CEO, West Bengal vide his D.O. Jetter No.629/HS/PA/ 19, dated 13.05.2019, the EC statement said.

The full order of ECI truncating the election campaign in West Bengal is given below: