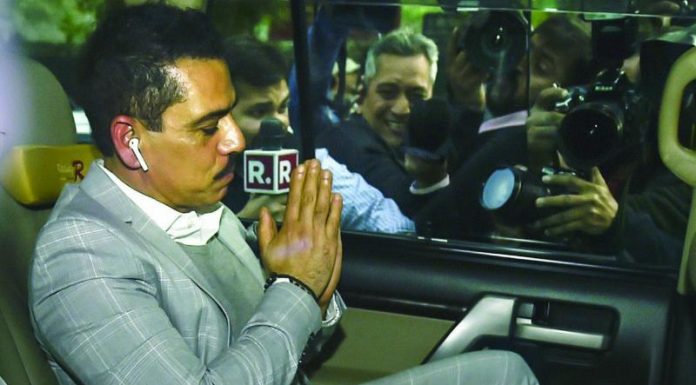 The Enforcement Directorate has sought custody of Robert Vadra in a case of money laundering and opposed the anticipatory bail granted to him by a trial court. The next date of the hearing has been fixed for the 5th of November.

The lawyer for ED, DP Singh, argued that the ‘Damaad’ of the Congress party was “evasive and noncooperative. We need his custody because there is a money chain that directly links to him.”

ED’s lawyer today while presenting his arguments said, “He (Robert Vadra) is evasive and non cooperative. We need his custody because there is a money chain that directly links to him.” https://t.co/F5Uqvk30go

Singh argued that the trial court has not taken into account certain facts and also that the plea for anticipatory bail was filed when Vadra was not even in the country. The investigative agency had approached the Delhi High Court against the trial court’s order.

The ED further argued that his custody was necessary as a “money chain” was discovered which directly led to the husband of Priyanka Gandhi. Vadra’s lawyer, however, claimed that his client was cooperating with the agency and had appeared before them whenever he was summoned.

The ED case relates to allegations of money laundering in the purchase of a London-based property at 12, Bryanston Square, worth 1.9 million pounds. The property is allegedly owned by Robert Vadra.