Exclusive: Read the detailed charges of misconduct against IAS officer who resigned over restrictions in Kashmir

On July 8, almost a month before the decisions on J&K, the government had issued a memorandum proposing disciplinary action against Kannan Gopinathan on several grounds. IAS officer Kannan Gopinathan is in the news after he resigned from his post protesting the government’s decision to impose restriction in Jammu and Kashmir. While he has refused to join duty after the central government rejected his resignation and asked to join immediately, now it has come to light that the officer was facing disciplinary action even before the decision to abrogate Articles 370 and 35A in Jammu and Kashmir were taken.

Kannan Gopinathan, who was the Secretary at the power department of the Union Territories of Daman & Diu, and Dadra & Nagar Haveli, had submitted his resignation on August 21. After resigning, he had issued statements in media saying that “denial of fundamental rights” to lakhs of people in Jammu and Kashmir was one of the reasons of his resignation.

On July 8, almost a month before the decisions on J&K, the government had issued a memorandum proposing disciplinary action against Kannan Gopinathan on several grounds. The memorandum said that the officer had been indulging in various acts of omission and commission which constitute misconduct within the meaning of rule (3) of the AIS (conduct) Rules, 1968. It said that he has indulged in act of insubordination, adoption of dilatory tactics and dereliction of duty etc.

The document lists five offences committed by Gopinathan, which are:

The memorandum had asked Kannan Gopinathan to reply within 10 days why disciplinary proceedings should not be initiated against for the stated acts. 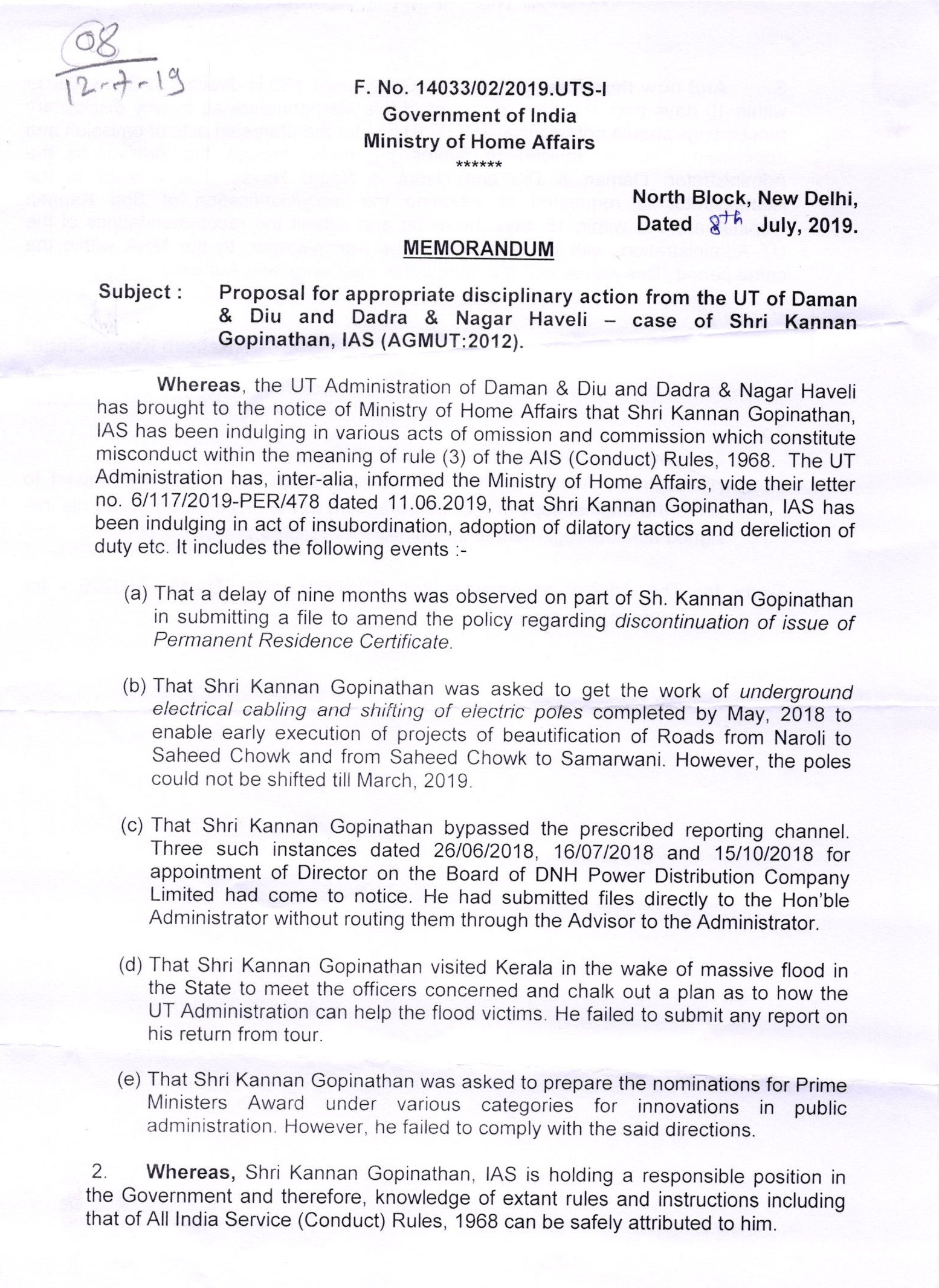 Kannan had submitted his reply to the notice on 31st July, where he had denied some charges, and gave justifications for others. He had said that as he was busy in election duty, some of his works were delayed. He denied the charge that he didn’t nominate anyone for PM’s award, asserting that 5 applications were submitted, but none of them was selected for any award. For delay in electrical work, he cited the delay in getting approvals from various departments. Regarding his Kerala visit, he said that it was decided in a meeting with the DC that the report need not be submitted.

It is interesting to note that while Kannan Gopinathan is vocal about his reason his resignation being the restrictions in Kashmir, he has not said anything regarding the disciplinary actions he is facing. Moreover, the action on him started in July, so he can’t allege that he is being targeted because of his views.

The complete response of Kannan Gopinathan can be viewed below.