Why is UPSC producing people like Shah Faesal and Kannan Gopinathan: Structural problems that must be fixed

A Sangh Parivar education group recently pointed out that some 90% of UPSC qualifiers are from an English language background, which shows how absurdly unrepresentative the crop of IAS officers is.

Abhishek Banerjeehttps://dynastycrooks.wordpress.com/
Abhishek Banerjee is a math lover who may or not be an Assistant Professor at IISc Bangalore. He is the author of Operation Johar - A Love Story, a novel on the pain of left wing terror in Jharkhand, available on Amazon here.
Facebook
Twitter
Telegram
Email
WhatsApp
5663

This is Kannan Gopinathan, the ex-IAS officer who quit his job recently to express his anger over what happened in Kashmir. Since then, he has had at least two appearances on The Wire and at least one on NDTV that I have seen. I think he made a second appearance with Ravish Kumar. 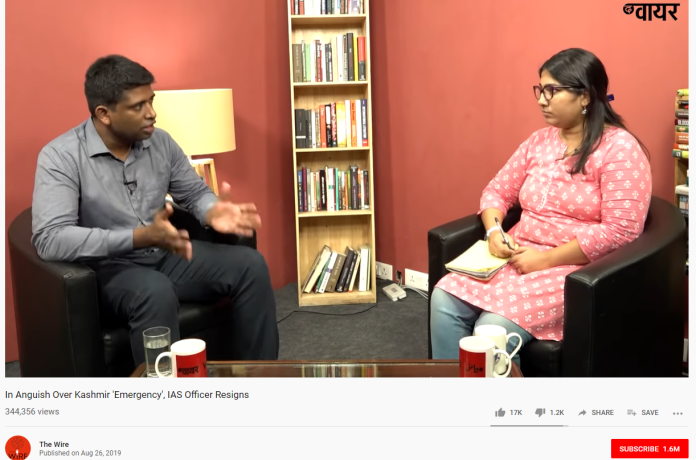 In one of these appearances, he said, stunningly, that the Chinese government is allowing freedom of speech in HongKong but the Indian government is not! Seriously? He has been on like ten different Indian channels criticizing the Government of India and he still thinks there’s no free speech? Let’s see him go to Beijing and criticize Xi Jinping.

This is how they keep their agenda flag flying high. Remarks like those of Arund**ti Roy saying Pakistan has never used its military against its own people (forgetting what the Pakistan Army did in Bangladesh, in Balochistan, etc) don’t come out of nowhere. They are not incidental. They are not lying, I believe they don’t even care about the truth as long as they are making India look bad.

As we would say in Hindi, life set hai bas for Kannan Gopinathan. I guess he is already on the shortlist for the Ramon Magsaysay award at some point.

And then there is of course Shah Faesal, the other ex-IAS officer who has been in the news.

How sinister is this guy? Said he was on his way to Harvard to complete his Master’s degree, but he had no student visa. Just a tourist visa. You have to wonder what he might have done if they had let him leave the country. We don’t know for sure, but probably some kind of spectacle in front of some international body.

The real question is: why is UPSC producing people like Shah Faesal or Kannan Gopinathan? At the very outset, I must admit that this sample of two people is laughably unscientific. Okay, let us make the sample bigger then by adding in Arvind Kejriwal. LOL.

He may be a pathetic clown-like figure today, but he did try. And while AAP still mattered, it was one of the most poisonous forces ever created in Indian politics.

While this is still (highly) anecdotal and we have no hard data about how our bureaucrats think, I believe there might be some structural problems here.

Let me insert another anecdote here. A few months ago, a young niece of mine who wanted to study to be a lawyer, joined up for a coaching institute to help her clear the CLAT (Common Law Admission Test). I was shocked to hear that the institute had asked her to read The Telegraph regularly to help her chances! I don’t think we can blame the private coaching institute. They know what kind of “information” is needed to answer the questions on the competitive exam.

This is a structural ecosystem problem. Questions in a wide variety of subjects like political science, current affairs, etc can be tilted towards a certain worldview. The UPSC even has an interview, which makes the subjectivity component at least 10 times worse. An officer doesn’t even need to do this deliberately, the bias can easily be unconscious. It is not even humanly possible to be unbiased. So the Congress worldview will dominate simply due to the fact that they have been in power for 6 decades. And I am sure there are going to be bad people within the system who will try to structure the process to suit candidates of their left-liberal worldview.

A Sangh Parivar education group recently pointed out that some 90% of UPSC qualifiers are from an English language background, which shows how absurdly unrepresentative the crop of IAS officers is. But the UPSC exam paper is provided in several languages, is it not? But the very fact that the paper is drafted in English and then translated puts non-English speaking candidates at a disadvantage. If this is possible, imagine how easily political bias can be sneaked into the system.

What is the solution to this? If you ask me, the ideal solution is quite drastic: simply get rid of the IAS.

In fact, I believe keeping the IAS was one of the worst decisions that independent India ever made. The Indian Civil Service was created by a colonial power with the express purpose of keeping people in check. In order to make sure that Indians don’t raise their heads too much.

While this may have worked splendidly for the Empire, it does not meet the needs nor the aspirations of a sovereign nation. To imagine that the same civil servants, with their same British protocols, will suddenly go from keeping people down to lifting them up, is ridiculous. Everyone in India knows that IAS officers are like “gods.” Which is a disaster?
An IAS officer does not create wealth. An IAS officer does not do anything innovative, nor come up with ideas to encourage innovation. An IAS officer merely enforces policy decisions from the top. But yeah, they do have the trappings of power: VIP cars, big mansions, many servants and many people begging them for favours.

At worst, we have a crummy old ecosystem that trudges on with loyalty to old Nehruvianism.

At best, we have produced a class of people drunk on power, who take one exam which demands zero creativity. And never forget about how many young people waste their energy trying to crack this exam and achieve elevated status. If the minds of these young people were freed up to do productive things, we could have achieved so much more as a nation.

I do see some hope. The Modi government has opened up lateral entry into civil service positions. I believe these are fixed-term appointments. It’s a small beginning. But you have to realize that for most hidebound bureaucrats, circumventing the holy UPSC exam is sacrilege. In the coming years, I hope to see this grow and grow until the IAS is effectively disbanded, rendered totally irrelevant.

The autopsy report of the eight policemen who died in one of the bloodiest encounters in UP History has revealed Maoist-style ambush and extreme brutality.
Read more
News Reports

PETA had put up a hoarding in Qaiserbagh, which displayed a huge picture of a goat and urged people to turn vegan
Read more

According to a Hindu government civil servant, Pritam Das Rathi, about 3,000 Hindus live in Islamabad and the outskirts of the capital city without a temple or a crematorium.

Kim Kardashian as First Lady? Rapper Kanye West announces he is running for US President, Elon Musk extends his support

US-based rapper Kanye West today took to Twitter to announce that he's going to run for President in the upcoming Presidential elections in America.

While Maharashtra govt threatens action against Patanjali for Coronil, state municipal corporations endorse “unani kadha” as a remedy against coronavirus

China’s ‘Century of Humiliation’: How period between First Opium War in 1839 and victory of CCP in 1949 shapes China’s view about the world

The Chinese claim to Vladivostok is a stark reminder of the extent to which the 'Century of Humiliation' plays a very crucial role in shaping China's foreign policy.

The Conference Hall of the Leh Army Hospital has been convereted into a ward for soldiers with minor injuries, that does not mean it is fake
Read more
Opinions

Swara Bhasker starrer web series gets record low ratings, leftist elites claim it is because she opposes BJP, not because it is bad

Suspended Hindustan Times reporter issues apology after Hinduphobic tweet goes viral, says her comment is being taken out of context

No, BJP leader Vikas Dubey is not the gangster who killed 8 policemen in Kanpur, read how Congress trolls spread fake news

Several trolls took to social media to share an image of a BJP leader along with Uttar Pradesh Chief Minister to claim that the person was the notorious gangster Vikas Dubey, to allege that he belonged to BJP.
Read more
News Reports

Swara Bhaskar tries to exploit Sushant Singh Rajput’s death to label herself as an outsider: Here is how that is patently false

While Swara Bhaskar claims to be an outsider in Bollywood, her mother Ira Bhaskar was a member of censor board
Read more

Vikas Dubey got a call from police station before raid, I saw nothing, claims gangster’s aide who was arrested last night

8 police personnel were killed and six cops were injured in Kanpur during a police raid to nab Vikas Dubey.
Read more
News Reports

The autopsy report of the eight policemen who died in one of the bloodiest encounters in UP History has revealed Maoist-style ambush and extreme brutality.
Read more
News Reports

PETA had put up a hoarding in Qaiserbagh, which displayed a huge picture of a goat and urged people to turn vegan
Read more
News Reports

According to a Hindu government civil servant, Pritam Das Rathi, about 3,000 Hindus live in Islamabad and the outskirts of the capital city without a temple or a crematorium.
Read more
News Reports

Kim Kardashian as First Lady? Rapper Kanye West announces he is running for US President, Elon Musk extends his support

The DRDO has built up a 1,000 bed coronavirus facility in the national capital in 11 days only. The temporary structure also includes 250 ICU beds.
Read more
News Reports

While Maharashtra govt threatens action against Patanjali for Coronil, state municipal corporations endorse “unani kadha” as a remedy against coronavirus