Shashi Tharoor was not the only one who shared this fake news and brazened it out. Jawhar Sircar who is the former CEO of Prasar Bharati and used to be India's Cultural Secretary when the Congress government was in power also tweeted the same fake news. 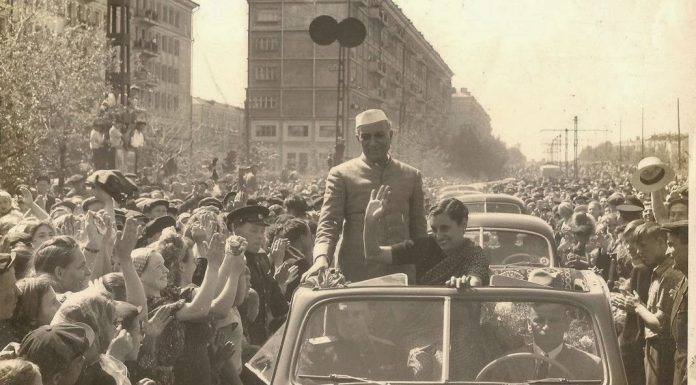 After Prime Minister received a massive welcome from not just Indian Americans, but also several US lawmakers including President Donald Trump, at the Howdy Modi event at Houston yesterday, Congress leaders and supporters are trying to downplay it. They are trying to say that the reception received by Modi was nothing new, and previous Congress Prime Ministers also received similar receptions. Congress leader Shashi Tharoor also tried to say the same, but while doing so he resorted to using fake news. 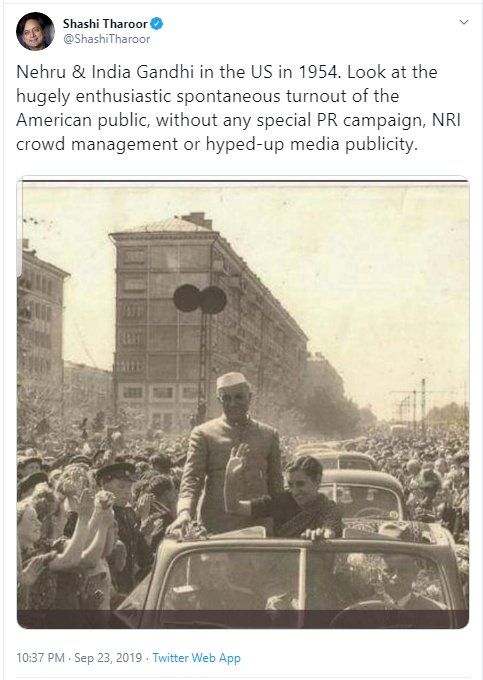 Today the Thiruvananthapuram MP posted a photograph on Twitter showing former prime ministers Jawaharlal Nehru and Indira Gandhi on an open-top vehicle being cheered by a crowd on some foreign location. Shashi Tharoor tweeted that the image is from the US in 2014. He wrote, “Nehru & India Gandhi in the US in 1954. Look at the hugely enthusiastic spontaneous turnout of the American public, without any special PR campaign, NRI crowd management or hyped-up media publicity”.

The Congress leader also mistyped Indira Gandhi’s name as India Gandhi in his tweet, which instantly reminds us of famous Indira is India, India is Indira quote by former Congress president Debakanta Baruah.

Magnitogorsk is an industrial city in Chelyabinsk Oblast, in curent Russia. jawaharlal Nehru and his daughter Indira Gandhi had visited the city on 17 June 1955, during their USSR visit. This was the first official visit of USSR of Jawaharlal Nehru as prime minister, and during the almost three-week visit, he had visited several places like Stalingrad, Simferopol, Alushta, Yalta, Tbilisi, Rustavi, Tashkent, Ashkhabad, Alma-Ata, Magnitogorsk , Sverdlovsk and Leningrad etc, apart from capital Moscow. Kremlin had organised a huge reception in honour of the India’s first PM.

USSR had an extremely authoritarian regime at that period. USSR (Union of Soviet Socialist Republics) was a one-party state ruled by the Communist party. The foundation of USSR itself was the October Revolution where Leninf had overthrown the provisional government.

For Shashi Tharoor to insinuate that the ‘Howdy Modi’ event in Houston was stage-managed and people coming out to greet Jawaharlal Nehru and Indira Gandhi in USSR was not is laughable, to say the least. The ‘Howdy Modi’ event was attended by Indians who live in the USA of their own free will as opposed to a state like USSR back in 1956 where the average population had no right to oppose the diktat of the Communist state. Essentially, in 1956, had the state asked people to be present at a place to greet dignitaries, they would have to be there whether they wanted to be there or not. The chance of a crowd being stage-managed by the Communist regime in 1955 in Soviet Russia is almost a given.

Shashi Tharoor, after tweeting fake news went on the tweet again only to offer and ‘explanation’ and make matters worse.

After insulting Prime Minister Narendra Modi and belittling his massive popularity, Shashi Tharoor, to mask his own incompetence went on to tweet platitudes.

I am told this picture (forwarded to me) probably is from a visit to the USSR and not the US. Even if so, it still doesn’t alter the message: the fact is that former PMs also enjoyed popularity abroad. When @narendramodi is honoured, @PMOIndia is honoured; respect is for India. https://t.co/9KQMcR0zTD

He said that even though the picture is not from the USA but from USSR, it shows the popularity of then PM Nehru. He also said that when PM Modi is honoured, PMO is honoured and the respect is for India. One wonders where this logic went when the tweet where he tweeted fake news, he spoke about the ‘Howdy Modi’ event being a PR campaign, being stage-managed etc.

Shashi Tharoor was not the only one who shared this fake news and brazened it out. Jawhar Sircar who is the former CEO of Prasar Bharati and used to be India’s Cultural Secretary when the Congress government was in power also tweeted the same fake news.

This will remind us of how previous Indian PMs have been cheered by Americans (not Indians hustled together) and by American Presidents — no drama-bazi ! Trump used Modi to win over rich Indian diaspora & today he’s cozying up to Pak PM — promising to help him. pic.twitter.com/MVkKP5GJuL

He also tweeted a picture of Rajiv Gandhi with then President of the USA, Ronald Reagan. However, the fact that the respect that Rajiv Gandhi got by President Reagan could have very well been connected to the Bhopal Gas Tragedy where it is often said that Rajiv Gandhi let the main accused escape in exchange of his best friend Adil Shahryar who was convicted in the USA, escapes Sircar.

The ‘Howdy Modi’ event saw unprecedented reception where President Donald Trump also delivered a 30-minute speech followed by Prime Minister Narendra Modi addressing the diaspora in Houston. Ever since the event, the ‘liberals’ have been foaming at the mouth finding reasons to discredit the massive reception that Prime Ministre Modi got.

Editor’s Note: This report had earlier asserted that the picture was taken in Moscow, USSR, in 1956. This was the result of wrong information provided in several websites which were returned as first page result in Google Image Search. The article has been updated with correct information.