Prime Minister Modi is visiting the United States to attend the United Nations General Assembly and a host of other events. 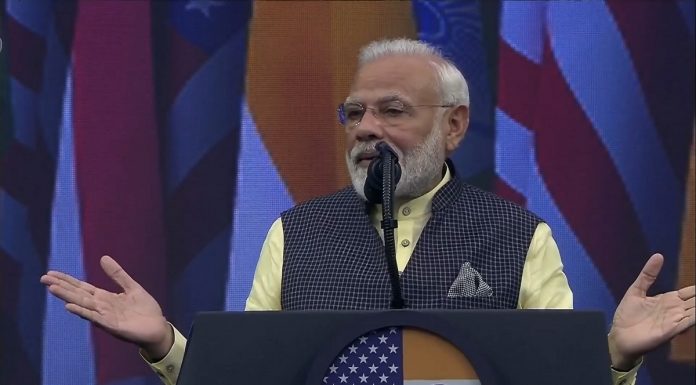 Prime Minister Narendra Modi is going to address the much-awaited community event ‘Howdy, Modi’ in Houston, USA, shortly. The mega community summit at the NRG Stadium was completely sold out and more than 50,000 people are attending it.

This event is the largest ever event addressed by an Indian Prime Minister in North America and also the largest for a foreign leader in the US other than Pope Francis.

Prime Minister Modi is visiting the United States to attend the United Nations General Assembly and a host of other events. He will address the UNGA on 27th September, before that he will attend several diplomatic and trade meets.

A three-hour-long cultural program is organised as the Howdy Modi event, which will be attended by President Donald Trump also. The live stream of the even can be watched below.

After the cultural performances started at NRG Stadium, POTUS tweeted that he will be ‘in Houston to be with his friend’.

Will be in Houston to be with my friend. Will be a great day in Texas! https://t.co/SqdOZfqd2b

He didn’t name his friend, not needed.

It surely will be a great day! Looking forward to meeting you very soon @realDonaldTrump. https://t.co/BSum4VyeFI

PM Modi responded to the tweet by quoting it. “It surely will be a great day! Looking forward to meeting you very soon”, he tweeed.

9:30 PM- Several US lawmakers, senators and house representatives, on the stage to welcome PM Modi.

9:34 PM- Today is a celebration of the friendship between America and India, a strong resolute and growing friendship. America is proud to be your friend, and today is about celebrating that friendship: Senator Ted Cruz.

9:36 PM- This is certainly a Texas-size welcome for Prime Minister Modi. Today, India is increasingly riding on American natural gas. Most of which comes from the lone star state. For as deep as our economic ties are, our cultural ties are stronger. India and US trade just keeps getting stronger day by day by day: Senator John Cornyn. 9:47 PM- Mayor Sylvester Turner presented Prime Minister Narendra Modi with the key to the city of Houston, the ‘energy capital of world’.

10:28 PM- President of the United States Donald Trump arrives at the venue.

10:40 PM- Crowd roars as the Prime Minister and the President arrive at the stage.

10:47 PM- Modi speaks in English, a change from speaking Hindi in most such events. 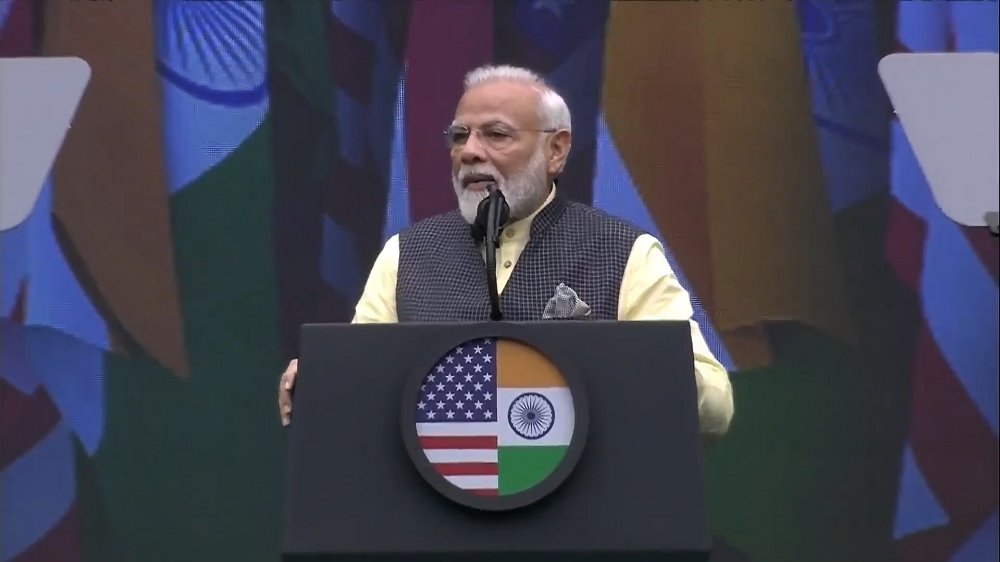 10:50 PM- “From CEO to Commander-in-Chief, from boardrooms to the Oval Office, from studios to global stage, from politics to economy and to security, he has left a deep and lasting impact everywhere. very time I met him I found the same friendliness, warmth and energy in him”. “This is extraordinary, this is unprecedented”, Modi praises Trump while welcoming him. 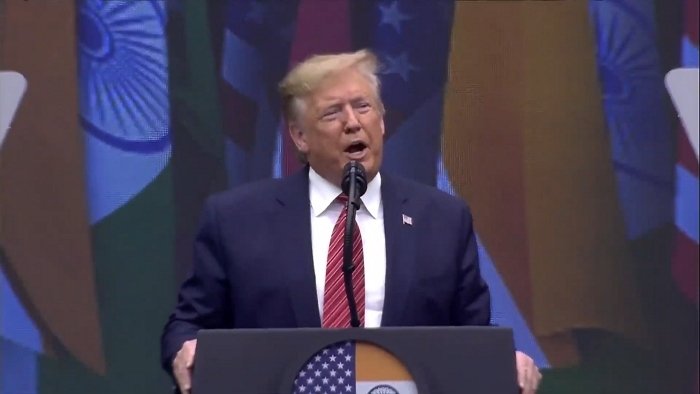 11:00 PM- 600 million Indians went to the polls and voted for Prime Minister Modi, Congratulations Mr. Prime Minister. That’s a lot of people. We love you, we support you, we will be with you every step of the way. My profound gratitude to the nearly 4 million Indian Americans in our country. You uphold our values. You are proud to be Americans and we are proud to have you. : US President Donald Trump.

11:05 PM- POTUS talks about tax cuts and reduction in unemployment rates in USA. Presidential elections are scheduled next year.

11:10 PM- Trump: As a result of PM Modi’s pro growth policies, India has lifted nearly 300 million out of poverty, and that is an incredible number. We are seeing something really remarkable in both the nations. India has never invested in the US as it is doing now and it is reciprocal. We are doing the same thing in India.

11:11 PM- President Trump announces first-ever NBA basketball event in Mumbai next week. “Am I invited Mr. Prime Minister? I might come,” he adds.

11:12 PM- ‘Tiger Triumph’ to be the first big tri-service military exercise between India & US later this year, Trump announces. “Good name”, he adds.

11:16 PM- President Trump says Border security is vital for the US and border security is vital for India. He hails India’s decision to increase scrutiny on illegal immigrants. “We are working hard to ensure that those who would threaten our security are denied admission into our country. We are going to take care of Americans first before we take care of illegal immigrants pouring in our country”.

11:22 PM- PM Modi starts his main speech, this time in Hindi. English translation available for audience though the in house FM channel.

11:27 PM- Modi: “This atmosphere is unprecedented & extraordinary, when you talk of Texas then everything is on a grand scale. I’m seeing history being made, and a new chemistry also”. PM thanks the administration for their support, and apologises to those who could not attend the event due to lack of space.

11:30 PM- This event is called Howdy Modi, but I am no one, I am a common man working on the directions of 130 crore Indians. Modi alone is nothing, I am a simple man working for billions of Indians. So when you ask ‘Howdy, Modi?’ – the answer is ‘everything is well in India’.

11:31 PM- Modi said ‘all is well in India’ in multiple Indian languages. That should end the debate on Hindi imposition back home.

11:35 PM- Modi: Diversity makes India great in the world. Unity in Diversity is our heritage, it’s the basis of our vibrant democracy. It is our strength and inspiration.

11:38 PM- Diversity makes India great in the world. Unity in Diversity is our heritage, it’s the basis of our vibrant democracy. It is our strength and inspiration. More than 50,000 Indians sitting here represent the greatness and diversity of India. This election, women voters were the highest and they were elected in the highest numbers as well. After 60 years, a govt was elected with full majority greater than its previous vote share. The 2019 LS elections waved the flag of Indian democracy throughout the world. 61 crore people participated in it. This is approximately double the total population of the US. Today, the biggest mission and dream in India is New India.

11:45 PM- Data is not just new oil; data is the new gold. Data is cheapest in India at present. World average cost of 1 GB data is 25 to 30 times higher than its cost in India.

11:50 PM- We are dedicated to welfare, but we are also giving farewell to many things. We are giving farewell to open defecation, corruption, outdated laws, complex tax regime, fake companies, fake names misusing welfare schemes. We also gave farewell to Article 370 last month. Article 370 had kept people of Jammu and Kashmir deprived of development and equal rights.

11:56 PM- Both the Upper House and Lower House has passed the bills related to this decision with a two-third majority, despite the government not having a majority in Rajya Sabha. PM asks the audience for a standing ovation for the parliamentarians for this.

11:59 PM- “Some people have a problem with the abrogation of article 370, these are same people who can’t govern their own country properly. These are the same people who shield terrorism and nurture it. The whole world knows them very well.” Modi does not mention Pakistan by name.

12:01 AM- “Be it the 9/11 in the United States or 26/11 in Mumbai, where are the conspirators found? Time has come to fight a definite and decisive war against terror and terror nations. Terror supporting nations will not be spared. President Trump is fighting against terrorism with full force. Let us give him a standing ovation on this.”

12:10 AM- India is one of the best FDI destinations in the world. India, today, isn’t postponing challenges, it is fighting it head-on. India isn’t working on small incremental changes, but on complete solutions. We are realizing the impossible. President Trump calls me a tough negotiator. But he himself is an expert in the art of the deal. I am learning a lot from him.

12:11 AM- PM Modi invites President Trump and his family to India, and concludes his speech.