Evidences prove that Hindus have always believed Ram Janmasthan is the place where Babri Mosque was built: Addendum to Ayodhya Verdict 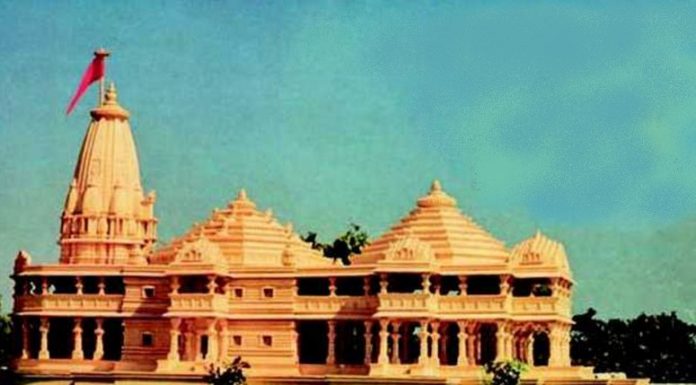 The Supreme Court verdict on the Ayodhya dispute has been declared. The judgment has ruled that Muslims will be provided with an alternate piece of land for a Mosque while the Ram Janambhoomi has been awarded to the proponents of a Bhavya Ram Mandir at Ayodhya.

In its unanimous judgment, the Court accepted the ASI report which confirmed the presence of a Hindu structure beneath the Mosque. It also accepted that the auspicious site has always sacred to Hindus. An addendum to the judgment by an unnamed judge goes into great depth of the beliefs of the Hindus regarding Ram Janmabhoomi. The judge considered credible historical literary sources as confirmation of the beliefs of Hindus regarding the site. The 116 page addendum has been included in the 1045 page Ayodhya verdict.

The Ain-i-Akbari  is a 16th-century document that recorded the administration of the Mughal Empire under Emperor Akbar, written by his court historian, Abu’l Fazl in the Persian language. The judge noted in his addenda, “The A-in-i-Akbari is an attestation of the faith and beliefs held by Hindus in the period of Emperor Akbar. Ayodhya was mentioned as the residence of Ramachandra, who was further described as Avatar, i.e., incarnation of Vishnu. A specific statement has been made that during the Treta Yuga on the ninth of the light half of the month of Chaitra in the city of Ayodhya, of Kausalya wife of Raja Dasaratha, Lord Ram was born.”

He continued, “The A-in-i-Akbari unmistakeably refers Ayodhya as one of the holiest places of antiquity. The above statement in Ain-e-Akbari clearly indicate that faith and belief of Hindus was that Ayodhya is a holiest place and birthplace of Lord Ram, the incarnation of Vishnu, which belief was continuing since before period of Akbar and still continues as on date.”

William Finch was an English merchant in the service of the East India Company (EIC). He travelled to India along with Captain Hawkins during the reign of Mughal emperor Jehangir. The two of them attended the emperor at the Mughal court and established trade relations between England and India. The judge took into account his travel account that has been published by William Foster in his book “Early Travels in India”.

The judge noted, “William Finch mentioned about ruins of the Ramachandra’s castle and houses. The travel accounts also noticed the belief of Indians that Ramchandra was born, who took flesh upon him.”

Father Joseph Tieffenthaler was a Jesuit missionary and one of the earliest geographers to write about India. He visited India between 1766-1771 A.D. He wrote the historical and geographical description of India in Latin which was later translated into French. English translation of the work was filed before the High Court as Ext. 133 (Suit-5) and the Court extensively relied on it.

The Supreme Court judge drew three important conclusions from the missionary’s account that “need to be noted. The judge stated, “First, that Emperor Aurengzebe got the fortress called Ramcot demolished and got a Muslim temple, with triple domes, constructed at the same place. It further states that fourteen black stone pillars of 5 span high, which had existed at the site of the fortress, are seen there. Twelve of these pillars now support the interior arcades of the mosque. Two (of these 12) are placed at the entrance of the cloister.”

Read- My last wish before I die is to see a logical end to this case: Ram Lalla’s 92 year old lawyer

He continued, “Second that, on the left is seen a square box raised 5 inches above the ground, with borders made of lime, with a length of more than 5 ells and a maximum width of about 4 ells, which is called Bedi (i.e. the “cradle”) by the Hindus. The reason for the faith and belief was also that there was a house where Beschan (Vishnu) was born in the form of Ram.”

“Third, that Aurengzebe or Babar got this place razed in order to deny the noble people, the opportunity of practicing their superstitions. However, there still exists some superstitious cult in some place or other. Since in the place where the native house of Ram existed, the Hindus go around 3 times and prostrate on the floor,” the judge concluded.

The addendum takes note of the Janma Sakhies which record a description of Guru Nanak’s visit to Ayodhya. As per he Janma Saihies, Guru Nanak had visited Ayodhya for Darshan of Ram Janma Bhumi in the year 1510 AD, even before the construction of the mosque in 1528. This record supports the claim of Hindus that there was a temple in Ayodhya which was regarded as the birthplace of Bhagwan Ram, the judge says.

The judge also noted that the Babri Masjid was always referred to as “Mosque Janma Sthan” in the official documents, orders and correspondences of the British government. The judge says that it “clearly indicates that Government officers at that time always treated the mosque as situated at Janma Sthan.”

The judge also mentions various officials using the same name for the Masjid or “Janma Sthan Mosque”. The judge says, “The above also clearly proves that even the Government officers referred the Mosque as Janam Sthan Mosque, which is fully corroborates the statements in Gazetteers as noted and extracted above that Babri Mosque was constructed at the Janam Sthan of Lord Ram.” The judge also notes P. Carnegy who said, “Ayodhya is to Hindu what Macca is to the Mohamedan and Jerusalem to the Jews.”

Apart from all of this, the judge has relied on a plethora of other evidence to come to the conclusion that Hindus have always considered the site as Ram Janmabhoomi. He concludes, “It is thus concluded on the conclusion that faith and belief of Hindus since prior to construction of Mosque and subsequent thereto has always been that Janmaasthan of Lord Ram is the place where Babri Mosque has been constructed which faith and belief is proved by documentary and oral evidence discussed above.”