The former Sena minister in the BJP-Sena government, Ramdas Kadam, is reportedly mulling submitting his resignation for being denied the ministerial berth in the recent cabinet expansion 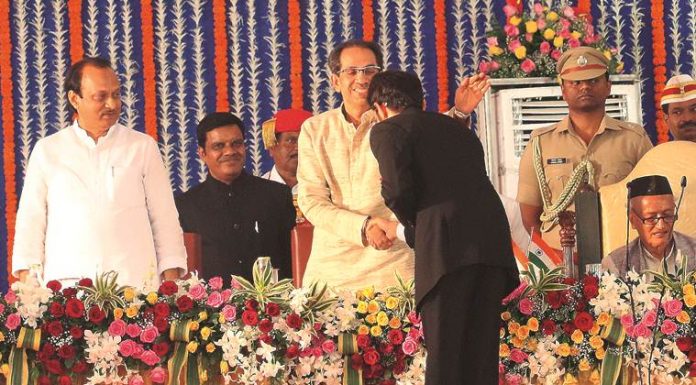 Shiv Sena mouthpiece Saamana has published an article alleging that the Maharashtra cabinet expansion has caused discontent among the party ranks who lost on the ministerial berths to accommodate the Independent legislators from Sena quota.

Validating the dissatisfaction brewing among some members of the Shiv Sena, the Saamana editorial asserted that “Original Shiv Sainiks lost ministerial berth due to induction of three independent legislators through Sena quota”.

The executive editor of Saamana is firebrand politician Sanjay Raut, who is considered as a chief architect of the alliance stitched up between the Shiv Sena, Congress and the NCP. He was reportedly unhappy with the Maharashtra cabinet expansion over the exclusion of his brother, Vikhroli MLA Sunil Raut, in the cabinet and did not attend Monday’s swearing-in function at Vidhan Bhawan.

A total of 36 ministers sworn-in as ministers in the Maharashtra cabinet expansion. Other prominent leaders who are included in the cabinet are- Ajit Pawar, Dhananjay Munde, Anil Deshmukh, Hassan Mushrif, Ashok Chavan, Jitendra Awhad, and Amit Deshmukh.

In the editorial piece that was published on Tuesday, the Shiv Sena mouthpiece said that former ministers Diwakar Raote, Ramdas Kadam, Tanaji Sawant, Deepak Kesarkar and Ravindra Waikar were denied a second chance to the ministerial berths in the cabinet to include three independents-Bachhu Kadu, Shankarao Gadhak and Rajendra Yedravkar.

According to the sources, Ramdas Kadam, who was a minister in the previous BJP-Sena government, is currently mulling on tendering his resignation after he was denied a ministerial berth in the cabinet.

The rumblings against the Maharashtra cabinet expansion is gradually gathering steam as Sena’s 5-time MP Bhavna Gawli from Yavatmal-Washim (Vidarbha) openly expressed her displeasure over the selection of Sanjay Rathod as a cabinet minister. According to her, more deserving candidates from the region have been ignored by the party. “The party should have included either Sanjay Raimulkar or Gopi Kishan Bajoria in the cabinet from Vidarbha West instead of Sanjay Rathod. All of us, including MP Prataprao Jadhav, submitted a written memorandum to party chief Uddhavji Thackeray. However, the party inducted him against our wishes and we are not happy with it,” Gawli said.