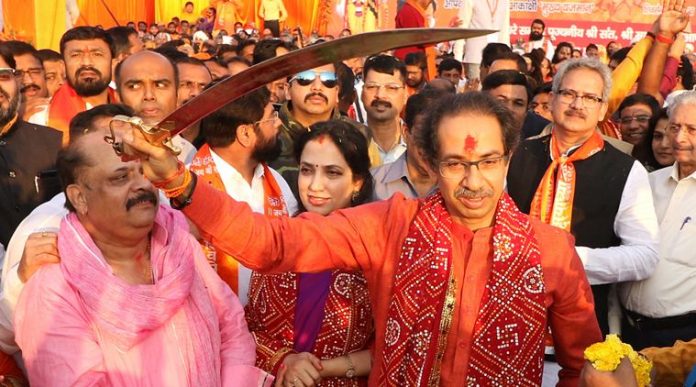 The Shiv Sena, the alliance partner of the Congress and NCP in Maharashtra, has interestingly raised a demand for a memorial in Ayodhya on the lines of Amar Jawan Jyoti as a ‘tribute to martyrs who laid down their lives for Ram Temple’.

In an editorial in its mouthpiece Saamana, Shiv Sena demanded the construction of a memorial for all those who were ‘martyred’ during the Ram Mandir movement.

“Many were martyred for Ram Mandir. Like Amar Jawan, names of these martyrs should be written in the same way as Amar Jawan Jyoti. For these martyrs, a memorial should be built on the banks of Sarayu,” the Sena wrote in Saamana.

The editorial said that tributes should be paid to workers of the Shiv Sena and other Hindu organisations who worked for Ram Mandir. “Many were martyred on the banks of Sarayu river…it was filled with blood,” the Sena said.

In its editorial, the Sena remembered the sacrifice made by Shiv Sainiks while storming Babri Masjid, and accused BJP of taking credit for the construction of Ram Mandir. “Those were Shiv Sainiks who reached the tomb of Babri. However, Shiv Sena never took political advantage of it,” the editorial said, but added that politics will happen over the issue.

“After the Supreme Court decision, the process to build the Ram Mandir has gained momentum. A trust has been made and by 2024, the temple will be made. This will definitely benefit the BJP,” the Shiv Sena said.

Taking a dig at the BJP, Shiv Sena wrote that issues like Pakistan and the surgical strike will not work for the 2024 General elections and so, Ram Mandir will be a selling point. “Many in the trust are close to the BJP. PM Modi will be monitoring the work,” the editorial said.

The Shiv Sena said as and when the Bhoomi pooja of the Ram Mandir takes place, not just the BJP, but leaders across party lines should also be invited. “This event should not be of one party. As far as Shiv Sena is concerned, for the last two times, we have gone to Ayodhya. On March 7, Uddhav Thackeray after becoming the Maharashtra CM will be going to Ayodhya,” the Sena said.
- Support OpIndia -