More
Home Opinions Dear CSDS, you fooled us once, but we won't get fooled again
Opinions
Updated: 8 December, 2017

Dear CSDS, you fooled us once, but we won’t get fooled again

The other day, the self-proclaimed Sachin Tendulkars at CSDS released an opinion poll on Gujarat elections that made liberals jump for joy. Leading the celebrations was India’s most spectacular loser.

Excitable journalist Sagarika Ghose could not help jumping at these words, who fell back on fond memories.

Which is funny, because I have here a picture of these same two people, back in the good old days when “Numero Unos” and “Numero Unees” used to rule this nation.

A neck and neck battle between Congress and BJP in Gujarat? Verdict delivered by Yogendra Yadav and Sagarika Ghose. I want to party like it is 2007.

And sure enough, this was the headline they put out back then (what is News18 today was CNN-IBN in 2007):

Awesome. Can I take a look at the numbers put out by CSDS showing Gujarat “swinging away from BJP”? Here, they are:

CSDS gave 92-100 seats for BJP and 77–85 seats for Congress. Now remind me what were the numbers that CSDS put out the other day as projections for 2017?

Nice try CSDS but republishing your 10-year-old “exit poll” of Gujarat as fresh survey from November 2017 is not going to cut ice.

On a more serious note, I have been suspicious for a while that CSDS is failing miserably for a while now because they have been unable to keep pace with the times. I found Yogendra Yadav on some television channel shortly after the CSDS survey was published, repeating the same tired old tropes about how other surveys always overestimate urban voters (who generally support BJP), about how BJP voters are more vocal, about how people are scared to speak against the incumbent government, especially against “fascist” BJP government, so on and so forth.

The problem is that CSDS is measuring elections of 2017 by the yardsticks of 1987. People of this new India are not scared of speaking their mind. Everyone speaks openly and without fear, be it Dalits or women or any other group. So when someone tells you that he/she is voting for BJP, take them at their word. Stop assuming that it is a secret Congress voter who is lying to you because of fear of persecution from BJP supporting “upper” castes.

Listen to people when you do surveys, instead of your prejudices from 3 decades ago.

Your “silent BSP voter” stopped existing about a generation ago.  You can trash that myth now and throw it into the dustbin.

The final and biggest fault with CSDS is that it refuses to learn from failure. Up until the beginning of this year, I had a bit of respect for them. When CSDS polls showed BJP slipping badly in UP and Eastern UP in particular, I wrote that it should be taken very seriously.

But the conduct of CSDS after Uttar Pradesh elections has been absolutely shameful. Other than a single tweet from Sanjay Kumar claiming to be Sachin Tendulkar of surveys and arrogantly dismissing all criticism, we didn’t see even a hint of repentance. No mea culpa, no analysis of how they could have missed such a massive electoral wave and zero transparency in this regard.

Forget Uttar Pradesh, CSDS put out absolutely inane projections for Uttarakhand, where the result had been clear as daylight from Day 1. Again, the nonsense about “Congress gaining” as the election approached. 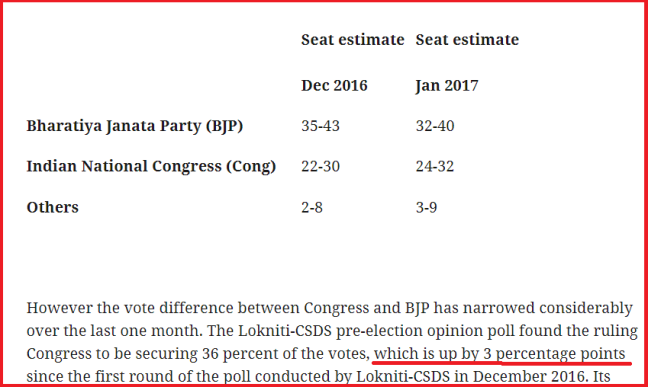 Most surveys have a margin of error of 3% of the votes, so CSDS showing an upswing of 3% for Congress as election approached is hardly a forgivable form of “statistical noise.” It’s a disastrous failure. Not to mention that the BJP polled 47% of the votes in Uttarakhand, as against a mere 39% projected by CSDS. This is too far outside the margin of error.

Science cannot fail like this. Data is a very powerful tool. The same statistics that CSDS uses to make projections of seat shares is that which Amazon and Flipkart use to suggest to you the stuff you might be interested in buying. Have you noticed how good they are at it?

Have you ever typed a couple of words into Google and been stunned by how Google can complete the sentence, almost reading your mind as it were? That’s the magic of data. That is the power of statistics. And it isn’t as unreliable as CSDS makes it look.

I’ll say it straight. At least to me, it seems that there is a high likelihood of CSDS “projections” being prima facie evidence that they are cheating.

A projected victory for Akali BJP in 2017 Punjab polls? Again by CSDS.

I remember even BJP supporters were in splits when they saw this poll. At that point, the anti-incumbency in Punjab was so fierce that Akalis were fighting to stay in second place.

As I said, you cannot possibly go so miserably wrong with data. Sorry CSDS, fool me once shame on you, you fool me twice, which won’t happen, shame on me.