OpIndia
Home News Reports 'You seem adjustable and compromising' : Editor-in-Chief of 'JK Monitor' to the girl he was looking to exploit
News Reports

‘You seem adjustable and compromising’ : Editor-in-Chief of ‘JK Monitor’ to the girl he was looking to exploit

As students of journalism, we are made to learn about ethics and morality, there is an entire paper dedicated to journalistic ethics and how one should conduct themselves as a working journalist. But like a lot of other things that we learn in the classroom, this ethical and moralistic aspect of journalism also becomes meaningless in the professional world and sometimes it takes a sinister form as a 20-year-old English literature student of Presidency University, Kolkata found out.

Esha Mitra is a native of Mumbai. She wants to pursue journalism and just like any of us, wanted to do an internship to understand the culture and nitty-gritty of this work portfolio. She took to Linked.in to find suitable opportunities and during this process found out about JK Monitor, which is an online news agency based out of Kashmir. This immediately caught her fancy as she was particularly interested in Kashmir and its politics. She stated –

“I have always been interested in Kashmir, being from Mumbai I did not want to pursue an internship in any metropolitan city.”

Esha reached out to Ajmer Alam Wani, the editor-in-chief of J&K Monitor via Linked.in and was asked by Ajmer to contact him via Whatsapp. This is where things get murky. One does not expect an editor-in-chief of a news organization to get personal out of nowhere as Ajmer did when he asked Mitra about her display picture and inquired about her personal life and even romantic relationships.

As time went by, Ajmer’s behaviour took a turn for the worse. While enquiring about how would Mitra manage her accommodation in Kashmir, the editor offered his own home and also added that his family would go to a village for two months and he would be alone. This improper line of questioning and remarks went on and on. Ajmer remarked –“U seems quite adjustable and compromising”.

Mitra thought he was talking about the ability to adjust in an adverse situation and willing to make compromises to get the job done, but what came later exposed the heinous nature of this “person of the year” – Ajmer Alam Wani. Mitra after understanding the ill-natured advances made by Ajmer stated that she would have to consult her parents to put this predator of a man, off. This did not work as Ajmer went on to state how she is not willing to be at his place and how he was expecting ‘her company’.

Enraged and taken aback by the sheer exploitative nature of Ajmer, Mitra took to social media and wrote an article in which she states –

“As for concern of my safety, when he suggested living with him during the course of my internship at JK Monitor, specifying that his family would be out of town, one of my responses was also to inquire as to whether it is difficult to find a place to stay (like a hostel or a paying guest accommodation), to which his response was “Finding a place is not an issue, u will find it”. My reason for asking him this question was precisely to get an understanding of his intent, and not misconstrue his possible desire to assist me. However, it is clear from this response, that “safety” was not the concern, but rather that “I (he) thought, of getting ur (my) company”.

You can read her first-hand account of the incident here.

While speaking to Opindia, Mitra reflected upon why she took to social media and how this incident has affected her.

“I definitely wasn’t expecting this when I messaged someone for an internship, however, I am not surprised. In our current state of affairs, it has become second nature to exploit women for your own advantage wherever there’s the slightest scope for it. I spoke up about this, so all of us that are applying for internships right now can be wary of men like these.” – Mitra stated.

Ajmer Alam Wani was awarded the “Person of the Year” certificate for “Bravery in Journalism”. Little did people know that the “bravery” displayed by him would be in being brazen about exploiting women in the field of journalism. 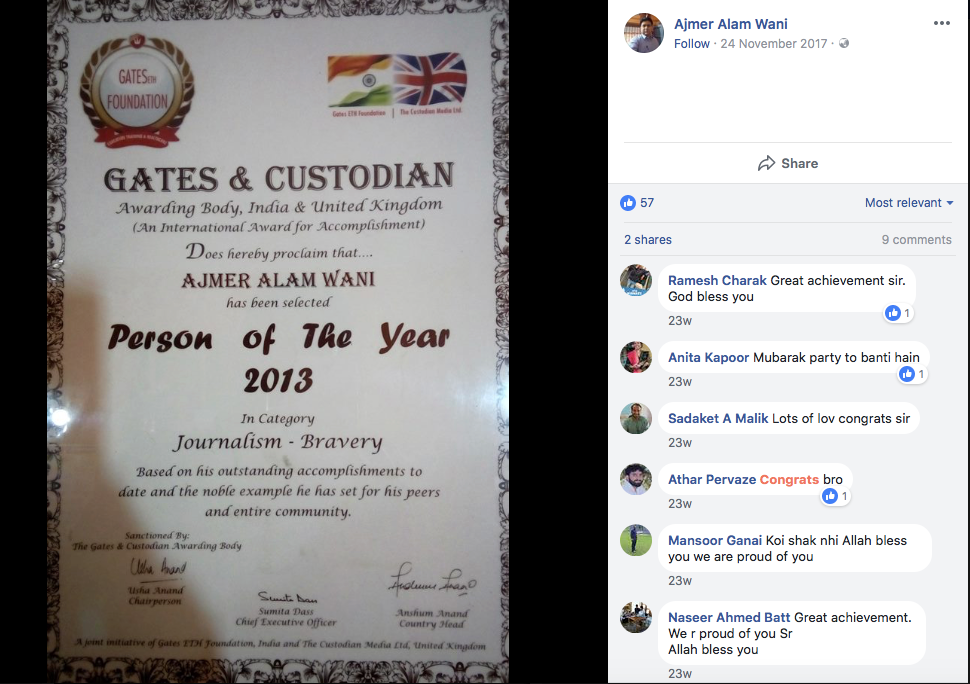 It is indeed frightful how young girls looking for work opportunities are often exploited by men in power and it thus becomes imperative that the journalist community stands up for her, and many like her. Predators walk among us. And it is time we call them out.