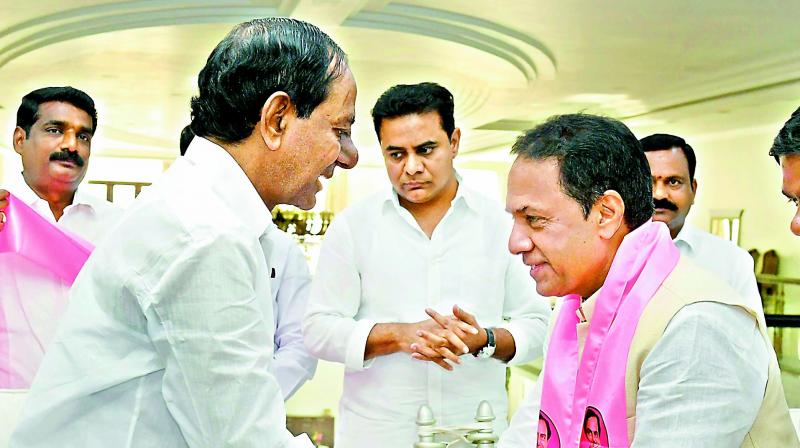 The name of former Congress speaker K R Suresh Reddy, who joined the Telangana Rashtra Samithi (TRS) in September this year, has appeared in the Congress’ office-bearer list. The list was announced on Wednesday for the forthcoming polls in Telangana, as reported by The Times of India.

A TRS leader commenting on the error said, “This shows the disconnect between Hyderabad and Delhi. This is an epic error”.

Suresh Reddy had joined the TRS officially on 7th September this year in the presence of chief minister K Chandrashekhar Rao. KT Rama Rao while addressing a meeting at Telangana Bhavan had welcomed senior Congress leader and former speaker K.R. Suresh Reddy along with his followers from Nizamabad district on joining TRS. Reddy’s decision to leave the Congress and join TRS had come as a shocker.

Reddy had, however, said that he joined the party, not for any “political gains” but to be part of the “silent revolution” for the progress and development of Telangana State.

This colossal blunder made by the Congress party was soon picked up by the mindful social media observers, giving Congress’ ruling rivals, the TRS and others an opportunity to mock the party.

Hats off! @INCTelangana!! Mentioning Suresh Reddy’s (Former Speaker from Congress who joined TRS) name in your committee list shows your seriousness towards the election and #telangana state..#TelanganaElections2018 @KTRTRS pic.twitter.com/0yyy33fZlJ

Almost immediately after the list was put up by the party’s national General Secretary, Ashok Gehlot, people on social media pointed out the glaring mistake, but still, the Congress party has not come out with any clarification on the error.