Ayodhya all set for another grand Diwali celebration, 3 lakh diyas to light up Lord Ram’s city

The entire city of Ayodhya has been transformed with artworks, paintings, Rangolis and lights to mark the grand Deepotsav 2018.

Continuing the precedent set last year after Yogi Adityanath became UP’s CM, the capital city in Lord Ram’s kingdom is all set to celebrate another grand, illuminated Diwali. Preparations had begun months in advance and the city has been transformed for the occasion.

A laser show was organised at the Ram Ki Paidi on the banks of Sarayu river last evening.

#WATCH: Laser show in Ayodhya’s Ram ki Paidi on the banks of Sarayu river, ahead of #Diwali. pic.twitter.com/j9GMeMwQog

The preparations had started months in advance under the supervision of CM Yogi Adityanath and while last year’s festivities were organised by the state tourism department, this year professional event managers have been roped in too. Last month, the Ayodhya Art festival was organised where artists from all over the country were invited to showcase their talent and decorate the walls of ram Janmabhoomi in themes from Ramayana. 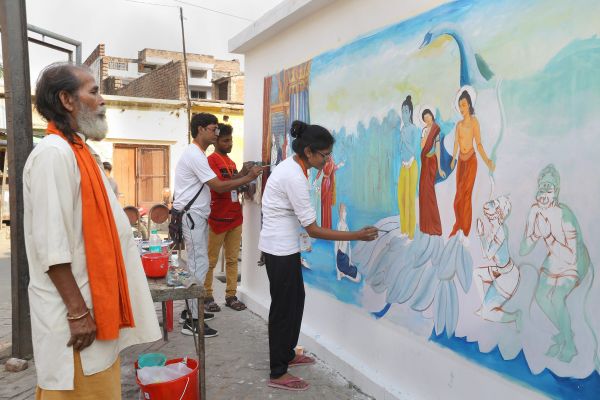 Thousands of Hindu spiritual leaders, sadhus and tourists from all over the world have gathered in Ayodhya for the Diwali celebrations. While last night’s laser show and Ramleela by international artists were a part of Chhoti Diwali celebrations, today’s events are the main attractions of the 3-day event. The Diyas or earthen lamps have been bought from the women’s groups working under the National Rural Livelihood Mission. A Guinness book world record in lighting the most number of Diyas is being aimed.

The chief guest of the event, South Korea’s first lady Kim Jung-Sook arrived in Delhi last night. She will launch the work for the Queen Hu memorial park in Ayodhya in honour of the legendary Ayodhya princess Suriratna, who is believed to have become a Korean Queen and is considered the maternal ancestor of many Koreans.

Preparations have been undergoing on a grand scale. Artists and enthusiasts from all over the country have gathered to participate to make the city beautiful. Rangolis, artworks, sculptures and paintings are to be seen everywhere in the city.

Among today’s main events, a sand sculpture made by artist Sudarshan Pattnaik will be reportedly unveiled by CM Yogi Adityanath and the South Korean first lady. The groundbreaking ceremony for Queen Hu Memorial Park is to follow next and later the CM will receive the artists performing the roles of Lord Ram, Laxman and Sita who will land from a chopper. The main festivities will be held in the Ram Katha park where cultural programmes will be performed. After a grand Aarti at Sarayu ghat in the evening, the 3 lakh diyas will be lighted. A water show and fireworks display are scheduled to follow next.

There have been speculations that CM Yogi Adityanath will announce the construction of a grand Ram Statue in the city during today’s festivities. As the demand for Ram Mandir in Ayodhya has picked up in recent days after the Supreme Court deferred the hearings, some BJP leaders had also hinted about a major announcement by Yogi Adityanath in this regard.