A Hath Yoga was conducted by Computer Baba, seeking success for Digvijay Singh in the Lok Sabha elections. 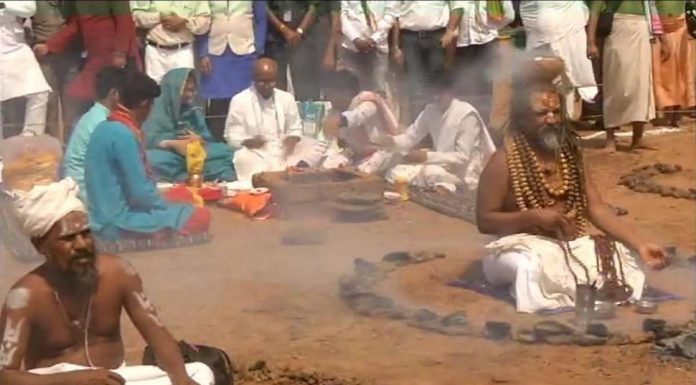 Today Congress leader Digvijay Singh performed a Yagna in Bhopal where several Sadhus were invited. A Hath Yoga was conducted by Computer Baba, seeking success for Digvijay Singh in the Lok Sabha elections. But now the Sadhus who were present in the ritual have revealed that they had nothing to do with the Congress election campaign, and they did not know that the program was organised for political purposes.

Computer Baba, originally Namdeo Das Tyagi, was accorded ministerial position under the BJP government in Madhya Pradesh, but he had left the post after six months and had become a critic of BJP during the assembly elections. He was seen getting closer to Congress party at that time. After Congress came to power, he was appointed as the chairman of the River Trust by the Kamal Nath government. Computer Baba led the Hath Yoga to pray for the victory of Congress leader Digvijay Singh from Bhopal, where he is facing Sadhvi Pragya from BJP.

Computer baba said that “these Sadhus are not for Congress but against BJP. Everyone refused to contest against Digvijaya Singh so the BJP found a sacrificial lamb in Pragya”. He also chanted the slogan “Ram Naam Abki Baar, Badal Ke Rakh do Chowkidar”.

“The BJP has fooled not just the public but the community of seers as well. All sadhus who are with me unanimously say that without a Ram Mandir there will not be a Modi government again. We are holding the Yagna to ensure Digvijay Singh’s win,” Computer Baba said.

But the sadhus who participated in the event said that they didn’t about its real purpose before they attended the same. They said that after coming to the venue they got to know that they have to speak for the Congress party and ensure the victory of Digvijay Singh.

One of the Sadhus said, “We are here because Computer Baba has asked us to be here. We live life of hermits. We are not here for campaigning for any party. It doesn’t bother us who wins the elections, we will only vote for those who work for us.”

Another Sadhu said, “We are here for Computer Baba. We are not aware of the other things happening here. We are not here for campaigning.”

Digvijaya Singh has been one of the earliest proponents of the ‘Hindu Terror’ theory which was postulated by the Congress party to frame Sadhavi Pragya in the Samjhauta Express case. Sadhavi Pragya was also allegedly tortured by the officers on the directions of Congress leaders. Even the NIA had given a clean chit to her in the case.