In June, OpIndia had covered the issue of foreign-funded childcare institutions operating with little supervision and prone to malpractice. The latest shocking development is of the arrest of the founder of Russ Foundation and the supervisor of a Children’s Home run by this foundation on charges of sexual assault of an 11-year-old inmate.

This organization has received Rs 1.7 Crores from the Tamil Nadu State AIDS Control Society, which is a Society run by the Government of Tamil Nadu in the last three years. Our examination of Russ Foundation’s FCRA returns reveal that it has received a total of around Rs. 5.5 Crore foreign funds during the period 2006 to 2017.

The total number of orphans residing in Child Care Institutions (CCI)/Homes across India was 41,730, out of which Tamil Nadu alone had a whopping 5,994 orphans living in 1647 CCIs/Homes. Yes, you read it right. According to the Union Ministry of Women and Child Welfare’s 2015 Mapping of CCI Report, TN alone has more than 1600 Orphanages, working out to around 45 CCIs per district, on average.

One such Government approved CCI/Home is run by a Russ Foundation, an organization registered in Ellis Nagar, Madurai. According to Russ Foundation’s submission on Niti Aayog’s Darpan portal, they “have been working for the welfare and development of girl children and women since 1992 providing shelter, education, food and other nutritional and medical supplements. HIV prevention and care and support is another major thrust areas where the Russ Foundation is working for the HIV prevention amongst the high-risk behaviour population.”

Russ Foundation is also an FCRA registered NGO, i.e., they are eligible to receive foreign funds and their FCRA registration number is TN/075940289.

Russ Foundation has also received considerable funds from abroad, primarily from The United Kingdom. In particular, an examination of their 2017 FC4 return shows that charities such as the Essex-based ‘Russ International (Charity No. 1167098) and the Colchester-based ‘Good Foundation’ (Charity No. 0000291251) and students of Leicestershire-based Loughborough University have donated considerable sums to the Madurai based NGO.

Their Shalom Hospice was inaugurated by the Japanese Consul General in an event which was also graced by Bishop Rev. M Joseph, currently the Bishop of Church of South India, Madurai Ramnad Diocese. 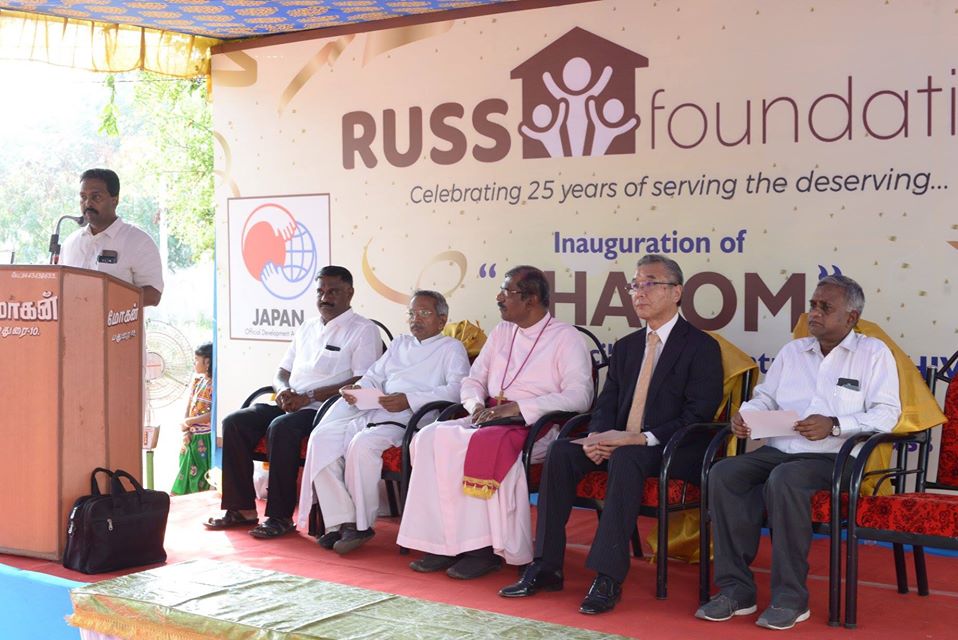 Incidentally, Russ International’s 2018 Annual Report submitted to UK’s Charity Commission mentions Berlin Jose as one of the Charity’s Trustees and a Peter Harrington as the Trust’s Chair. In its 2017 Annual Report, Russ International states “Our first grant provided was for a new bore well on the Russ Foundation campus, which was essential for providing the water required by the Home for Children without Parents, and other activities undertaken on the Russ Foundation campus in Madurai, Tamil Nadu, India”, which establishes the close relationship between the foreign charity and the Madurai Home. Similarly, the 2018 Annual Report of Good Foundation states “the trustees of the (Good) Foundation focus their attention and activities on raising support for, and promoting the work of Russ Foundation of Madurai, Tamil Nadu, India.” It further adds “Trustees are recruited from people who have visited and experienced Russ Foundation (Madurai)”.

These demonstrate that the Trustees of the UK-based Good Foundation have indeed visited Madurai’s Russ Foundation (as any Charity funder would do, for purposes of oversight). Their Annual Report also adds that they ‘run the Carlsson School which provides primary education for village children within reach of Chattirapatti and Thondamanpatti. This school also provides primary education for the girls and boys at the Children’s Home”. Needless to state, Russ Foundation’s Home is located in Thondamanpatti, Madurai.

A quick glance at their current projects does not reveal the scale and size of an enterprise that would require such large sums of money. The main activities that would require significant sums of money are a 40-inmate Children’s Home, a primary school for 125 children and a Hospice for terminally ill. The others are interventions in terms of awareness programs, health camps, help in arranging funerals and regular supply of medicines and nutrition.

However, a look at their photo gallery demonstrates an organization well-geared to market itself and attract donors. They have had able support from Indian media, as this puff-piece in The Hindu’s Metro Plus supplement demonstrate.

Mainstream media reports have surfaced that Russ Foundation’s Founder M. Berlin Jose and the supervisor of the Children’s Home, V. John Prabakar were arrested under various sections of POCSO, on charges of alleged sexual assault of an 11-year-old girl living in the Home. The Hindu also adds “that other children (in the Home) were also being examined to ascertain if any other inmate was subjected to sexual assault”. In a strange and unusual manner, Tamil mainstream media have written far fewer lines about this alleged crime than the English media.

The media also adds that the District Collector has instructed his team “to close down the home and seal it, after rescuing the children”.

Readers may recall OpIndia’s coverage of similar abuse of innocent children in CCIs/Homes in Tamil Nadu. For instance, in this shocking story, 44 children were rescued from a Home in Chennai run by a Jacob and a Vimala Jacob. In another sordid story, we covered how 50 children were rescued from Mercy Adaikalapuram Missionary Home in Tiruvannamalai run by a Rev. Luban Kumar and Mercy Rani. Thus, today’s story from Madurai is not about a one-off crime. There is a pattern.

While the law will take its course and justice will be served to the innocent child victims in such orphanages, we, as a society need to ponder over some questions.

Is the Road to Hell paved with Noble Intentions? Should Tamil Nadu be having so many Private Orphanages, allowed to run purely on their proclamations of Love and Noble Intentions? That too, with foreign funds?