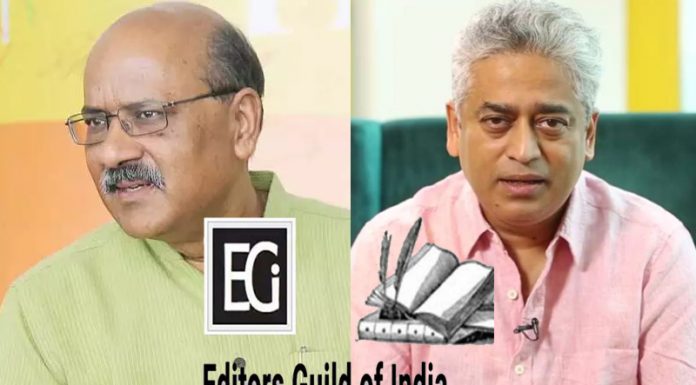 After the Editors Guild issued a statement condemning a Twitter poll run by BJP IT cell head Amit Malviya, the guild is being slammed by social media users for its selective approach. The Guild had issued the strongly-worded statement after Malviya ran a poll asking whether controversial journalist Rajdeep Sardesai should handle the PR for the terror organisation ISIS.

Now even some journalists have joined the criticism against Editors Guild, accusing it of being biased. Today News18 anchor Amish Devgan posted a tweet saying that the Guild is selectively rising up for journalists. He said that the Editors Guild was silent when he was abused by Congress spokesperson on air. “The Guild must remain consistent,” he added.

Good but why this selectivity in rising up for journalists? The Guild remained silent when I was abused by Congress spokesperson on air. The Guild must remain consistent. https://t.co/bFhtg4ySWr

In July last year, Amish Devgan was abused by Congress spokesperson Rajiv Tyagi during a live TV debate. After Amish had questioned the selective outrage of mob lynchings by the Congress party, Tyagi had verbally abused him by calling him Dalal and Bhadwa (pimp). Despite Amish Devgan urging him to control his language, the Congress leader had continued his abuses.

Read- Was Editors Guild more upset about arrest of Prashant Kanojia than murder of DD cameraman?

Commenting on the tweet of Amish, another journalist, Vikas Bhaduria of ABP News, tweeted that the Editors Guild remains silent other than Guild office-bearer issues. It may be noted that Rajdeep Sardesai is a former president of Editors Guild and an Ex-Officio Member of the Executive Council of the Guild.

Several social media users also reminded the Guild that it was silent when a journalist was heckled and abused by Congress leader Priyanka Gandhi Vadra’s team.

Editors Guild can speak freely against ruling party but has no spine to speak against Gandhi Family.

As for the Editor’s Guild, the less said the better. It’s a den of petty media politics.A cosy club of self-serving editors who express selective outrage. Cong targeting Zee News doesn’t qualify as a case worthy of their time. I mailed & called Shekhar Gupta repeatedly. No reply pic.twitter.com/jANEh30qgj

This is not the first time the Editors Guild has been slammed by journalists for being biased. Earlier this year, Zee News Editor in Chief had said that the Guild is a den of petty media politics, a cosy club of self-serving editors who express selective outrage. He had said that despite writing to the Guild regarding the Zee News being targeted by the Congress party, it did not qualify as a case worthy of their time. He has said that he didn’t get any reply even after sending mails and calling Guild President Shekhar Gupta repeatedly.