Although losing one’s bag is not a pleasant experience, asking the union minister to find and deliver it looks too much, as it is the mistake of some passenger and not a mistake of the airlines or the airport 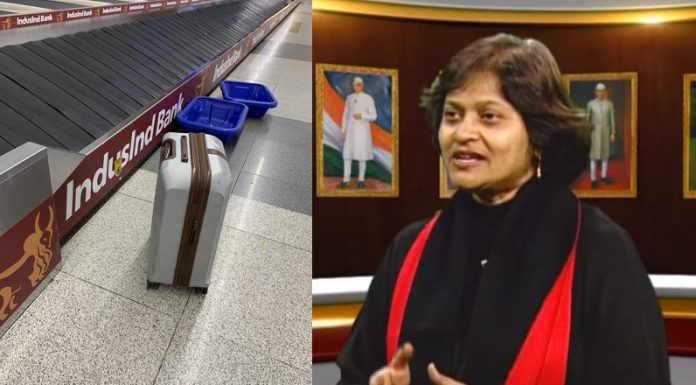 Misplacing and losing luggage is one of the common risks of travelling, especially in air travel where the bags are separated from the passengers. Sometimes airlines misplace the bag, either load them in some other plane or not load at all, and sometimes people take someone else’s bag from the carousel, mistaking it to be theirs.

Journalist Sheela Bhatt, who is the Treasurer of Editors Guild of India, also faced a similar situation today. She tweeted on January 11 morning that someone took her bag leaving behind his/her own, which is of the same size, same colour and same brand. But as Sheela Bhatt is a journalist and not an ordinary citizen, she wants the civil aviation minister to find her bag and deliver it her home.

Not so funny experience at @DelhiAirport . Someone took away my bag leaving behind hers. Same size, same colour and same brand. Waiting for @airindiain to cooperate. Please, deliver my bag home. @HardeepSPuri pic.twitter.com/eSHA6cT85B

In the tweet, she said that she was waiting for Air India to cooperate, and then added, “Please, deliver my bag home”, tagging the twitter handle of Hardeep Singh Puri, the civil aviation minister. Delhi airport replied to her tweet asking for her flight and contact details through direct message on Twitter. Few hours after that Sheela replied to them saying ‘still waiting’, and she tagged the minister in this tweet also.

It may be noted that her baggage was not misplaced by the airlines, and therefore Air India is not responsible for it. The fact that someone exchanged her bag by mistake means that the bag was unloaded from the plane and was put on the baggage carousel.

Although losing one’s luggage is not a pleasant experience, asking the union minister to find and deliver it looks too much, as it is the mistake of some passenger and not a mistake of the airlines or the airport. Perhaps the journalist should contact the airport authorities to locate her bag, instead of contacting the minister for it.

K Bhattacharjee - February 27, 2020
Anti-Hindu Delhi riots: It is mischievous and dubious to blame Kapil Mishra or the 'Bhagwa' for Khilafat 2.0