For MSM, “VYAPAM deaths” are the new “Communal attacks on Churches” 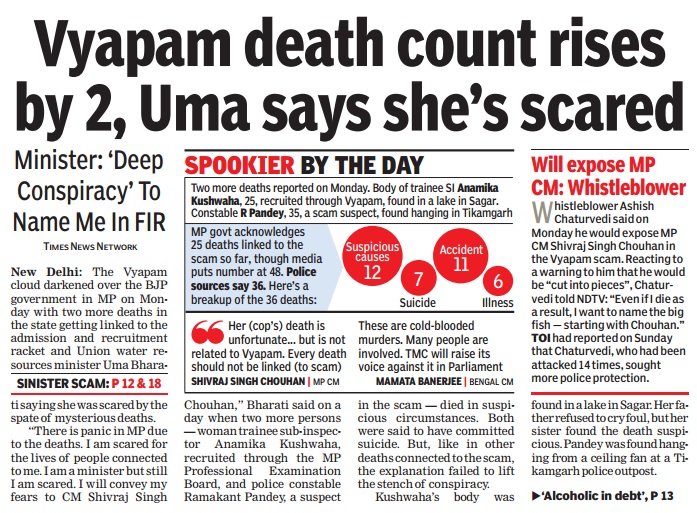 Early this year, we had seen MSM go crazy over the narrative “Christians under attack from Hindu Right Wing”. Every alternate day there was some news about some church being “attacked” or “vandalized”. Most of these reports were based on preliminary information, while some of them were stemmed from pure bias. A robbery attempt in a Delhi School was converted into an “attack”. The rape and robbery at Kolkata was communalised. Some like Rana Ayyub even prematurely pinned the blame on RSS. Eventually the culprits were found to be Bangladeshis.

With all this false reporting being exposed, the entire narrative was destroyed and even some genuine cases of communal violence began being questioned. It’s no surprise that suddenly all such communal attacks have stopped becoming news items since Media became the boy who cried wolf too often. A similar story might unfold as far as the VYAPAM scam is concerned.

As things stand, there are more than 40 deaths, which are believed to be linked to VYAPAM scam. At least this is what media says. If we go in to the actual deaths, many of them have only some tenuous link to VYAPAM, and some of them are still under investigation. Hence, even the primary whistleblower in the case, Dr Anand Rai, is careful when linking any death to VYAPAM. He says:

10 of the deaths that have occurred so far are in suspicious circumstances. The rest may be a matter of coincidence

But virtues like caution and propriety are unknown to Indian Media. While initial media reports about deaths can be discounted, because at that time, information available would have been minimum, it is unpardonable if someone keeps repeating something this, even when subsequent revelations may have caused a change in initial perception.

As a sample, we can see what Times of India published on its front page today: The Uma Bharti part aside, Times of India now claims, rather hilariously too, that the number of deaths related to VYAPAM, “as put by media” has reached 48. They include 4 recent deaths in this count, that of India Today Journalist Akshay Singh, a trainee SI Anamika Kushwaha, that of the dean of Jabalpur and of a constable named Ramakant Pandey.

Firstly in respect of Akshay Singhs’s death, the post-mortem report said that there were no internal or external injuries on the body of the journalist. Even the doctors have “reserved” their opinion on the cause of death and advised to wait for the result of viscera (internal organs) analysis, but the forensic experts at Times of India did not need any such tests and have come to their own conclusion. Comically, the assistant editor of Economic Times (Part of the Times Group), also tweeted and later deleted this tweet, hinting that there was no foul play in this case:

In a situation where even doctors aren’t sure of the cause, it is intriguing to note Times of India has made up its mind.

The second recent death “related to VYAPAM scam” is that of trainee woman sub inspector Anamika Kushwaha. She is believed to have committed suicide. Her only link to VYAPAM is that she was recruited via the VYAPAM exam. Here it is important to understand that VYAPAM runs ALL professional and Government admissions in MP via exams. Hence it is highly illogical to link everybody who got through VYAPAM, to the scam. This was reiterated by NDTV journalist Gargi Rawat:

Death of Trainee Cop Anamika Kushwaha had nothing to do with Vyapam ‘scam’ It was due to personal reasons.She was recruited thru Vyapam exam

Another female police officer known to Anamika also said that “was mentally stressed from the past few days”. In such a scenario it would be unfair to link to her death to VYAPAM, but when was MSM fair?

Third we go to the death of the Dean of Jabalpur. This is a tricky one since he was the chairman of the committee appointed to investigate fake doctors appointed through VYAPAM. Also his predecessor DK Sakale too was found dead in July, 2014 with 90 per cent burns. But, as of now, the police have ruled out foul play and his family too informed the cops that he had a heart ailment. Again, this is not a clear-cut, proven death related to VYAPAM, but it is more likely to be related to VYAPAM than others.

The last one is of constable Pandey. He was questioned 4 months ago in relation to the VYAPAM scam and was found hanging from the ceiling at a tourist outpost yesterday. Even here, the police denied allegations of the death being linked to VYAPAM scam claiming that Pandey was an alcoholic and was depressed over mounting debt. Again, Gargi Rawat concurs with this theory.

We are not saying none of the above deaths are related to VYAPAM, but we are saying that it’s too early or too hard to definitely say these are VYAPAM related deaths. Some cases maybe more intrinsically linked while some have very weak connections to VYAPAM scam. 4 other deaths were probed by Indian Express and even in those, the links to VYAPAM the scam were dubious.

Investigations are going on, all the facts are not out. It is known that over 2000 arrests have been made, and possibly an equal number could be suspects, hence there are bound to be some natural deaths, given such a large pool size. Further, even the main whistle-blower himself says only 10 deaths are suspicious and rest maybe a coincidence. Given all these facts, and when media credibility is at an all time low, once would expect Media to take it slow, try to bring some sense into their reporting, to regain the lost trust. But it seems some people never learn.