Sabarimala: ‘No-donation campaign’ initiated by devotees as a mark of protest

The Home Ministry had also warned the Kerala government that Left Wing Extremist groups might try to foment violence at Sabarimala, a warning that was clearly ignored by the Communist government. 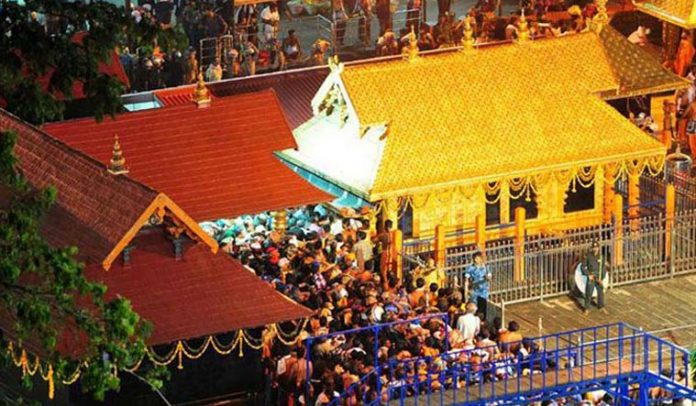 The Travancore Devaswom Board (TDB), which is an autonomous body managing over 1200 temples including the Lord Ayyappa Temple faces predicaments amidst the mounting protest following the controversial judgement of the Supreme Court allowing women of all ages to enter the Sabarimala temple.

Owing to the ongoing protests, the footfall that the temple has seen for decades has gone down considerably. Now, there seems to be a decline in the total revenue collection of the shrine, which was already deeply affected due to lower footfalls as a result of the ongoing agitation.

Sources within TDB have told The Indian Express that the revenue in temples has fallen by around 40 per cent after the TDB’s decision to not accept offerings by devotees as part of the ‘no-donation campaign’ to mark protest over women entry in the temple, initiated by former TDB president Prayar Gopalakrishnan.

Instead of money, the former TDB president urged devotees to deposit paper pieces with the writing ‘Swami Saranam’ in the offering boxes. TDB officials claimed that several temples offering boxes were jammed with pieces of paper. “It is almost sure that the revenue at Sabarimala would see a drop owing to the protests. The campaign has affected revenue at other temples as well,” they said.

Other Devaswom Boards in the state along with TDB, irked with this decision are also devising strategies to counter the campaign to avoid monetary offerings to temples.

“We will not allow the campaign to gain momentum. I will lead the campaign against the Sangh Parivar-backed move to decrease the Board’s revenue,” he said. The Nipah scare and the recent floods severely affected the revenue of MDB temples, Vasu said. “There was a drop of five lakh muttaravu vazhipadu (an offering) at the Kadampuzha temple alone,” he added.

However, the devotees of Lord Ayyappa have made themselves rather clear, first with the protests and now the refusal to donate to temples, that they will not stand for their traditions being desecrated. The thousands of devotees protesting have been at the receiving end of police brutality as well, however, they have maintained their stand firmly. Today, the Communist government of Kerala has also reportedly decided to send journalists away and cut communication from Sabarimala. This has fuelled speculation that the Kerala government might be planning something untoward on the last day of the Sabarimala temple being open.

The Home Ministry had also warned the Kerala government that Left Wing Extremist groups might try to foment violence at Sabarimala, a warning that was clearly ignored by the Communist government.