BJP president Amit Shah and Union Minister of Textiles Smriti Irani were elected to the Lok Sabha in the recently concluded general elections. Their victory had left two seats vacant in the upper house, making it necessary to conduct these bypolls. 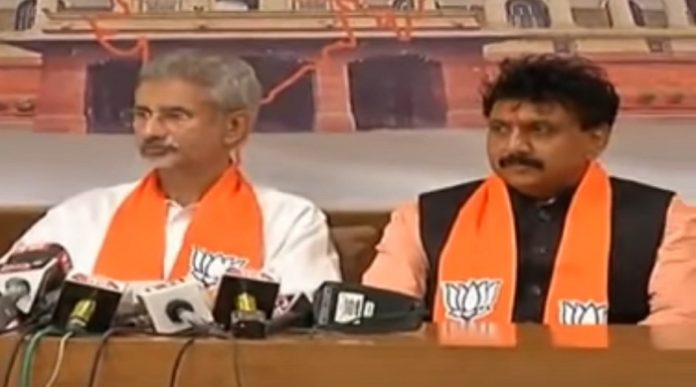 BJP candidates, External Affairs Minister S Jaishankar and OBC leader Jugal Thakor, have won the bypolls to two Rajya Sabha seats from Gujarat conducted today. At present BJP has 76 members in the Upper House and with this victory, the number has gone up to 78.

The voting for two seats was held between 9 am and 4 pm while the counting was done at 5 pm.

BJP president Amit Shah and Union Minister of Textiles Smriti Irani, who were Rajya Sabha MPs from Gujarat, were elected to the Lok Sabha in the recently concluded general elections. They had resigned from their upper house membership following their election to the lower house, and it had left two seats vacant in the upper house, making it necessary to conduct these bypolls.

While BJP fielded S Jaishankar and Thakor, Congress had nominated Chandrika Chudasama and Gaurav Pandya against the two.

BJP has 100 MLA’s in Gujrat assembly while Congress has 71 MLAs in the 182-member assembly. Given the strength of the number of representatives, BJP was in a formidable position to sweep these bypolls. Out of the total 182 MLAs, 175 legislators were set to exercise their voting rights including one independent, one from NCP and two from Bharatiya Tribal Party.

The elections on each of these seats were held independently, the candidates had to earn a comfortable 50 percent votes to win.

As per reports, three MLAs who were disqualified could not cast their votes.

At present, four seats in the assembly lie vacant after sitting MLAs, who got elected to the Lok Sabha, resigned from their seats.

While the voting for the bypolls was underway in Gandhinagar, Congress MLAs, who were whisked away to Banaskantha resort for a ‘shivir’ in a bid to stop horsetrading, returned to Gandhinagar this morning to cast their votes.