16 ruling alliance MLAs have resigned so far in Karnataka, making the government lose majority after the resignations are accepted 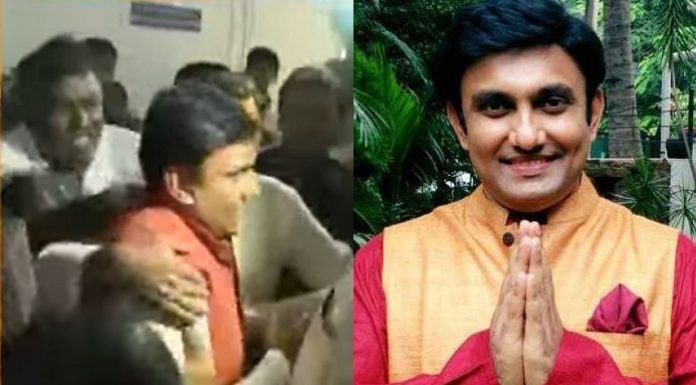 As the Congress-JD(S) government in Karnataka is on the verge of falling due to an increasing number of MLAs turning rebel, the ruling parties have taken desperate measures to somehow save the government. In a shocking video that has emerged from Bengaluru, a Congress MLA who has resigned was seen held captive in a room to persuade him to withdraw the resignation.

In the latest drama in the coalition government in Karnataka, 16 MLAs have resigned so far, which includes one independent MLA and the rest are from Congress-JD(S). These resignations have meant that the government has become a minority in the assembly. Congress MLA Dr K Sudhakar is one of the MLAs who have resigned.

In the video, it is seen that Sudhakar is heckled and pushed to the room of Congress minister KJ George in the assembly building by several Congress leaders. After the rebel MLA is forced into the room, the door is locked from outside and he is kept captive inside. Karnataka Congress president Dinesh Gundu Rao and MLA Priyank Kharge were among the leaders who assaulted the rebel MLA.

The incident happened on the third floor of the state secretariat, when K Sudhakar had gone to meet the speaker to submit his resignation today, along with MTB Nagaraj. When he came out after meeting the speaker and submitting his resignation, and he was trying to talk to the journalists present there, Congress leaders mobbed him and pushed him towards the room, while Nagaraj managed to walk away.

According to reports, he was taken to KJ George’s room before meeting the speaker also, to persuade him to not to do so. But he had emerged out of the room and submitted the resignation. The Congress leaders again mobbed him after meeting the speaker and forced him to the same room, in an effort to woo him back.

Soon BJP launched a protest against the “manhandling” of the MLA, with BJP State president B.S. Yeddyurappa terming it “goondaism” by Congress. BJP accused that Sudhakar has been kidnapped and he needs to be rescued. Later police rushed to the Vidhana Soudha and brought the situation under control. Responding to allegations, minister Kharge said that the party was only trying to talk to the Congress leader and have a discussion, and it was not an attack.