Meet General Bajwa: The Pakistani Army Chief who awarded himself a three-year extension at his job

Bajwa is also responsible for the destruction of at least one Indian politician's career. In 2018, he was hugged by senior Congress leader and then a Minister in the Punjab cabinet, Navjot Singh Sidhu. 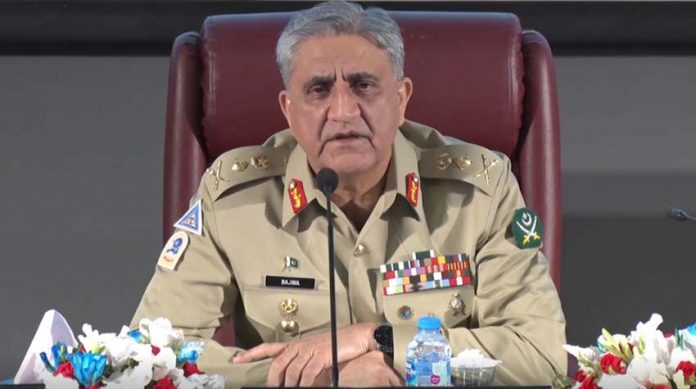 Pakistan Army Chief General Qamar Javed Bajwa received a three-year extension over concerns regarding ‘regional security’. The decision comes after the Indian government abrogated Articles 370 and 35A, and integrated Jammu & Kashmir completely with the Indian Union. Considering the political realities of Pakistan, it won’t be far-fetched to say that he gave himself an extension.

“General Qamar Javed Bajwa is appointed Chief of Army Staff for another term of three years from the date of completion of current tenure. The decision has been taken in view of regional security environment,” said a notification issued by Prime Minister Imran Khan’s office.

Government has granted an extension of three years in the tenure of Chief of Army Staff General Qamar Javed Bajwa. pic.twitter.com/oSCImgBFKl

The decision comes days after the Army Chief committed his support towards Kashmiris. “Pakistan Army firmly stands by the Kashmiris in their just struggle to the very end. We are prepared, and shall go to any extent to fulfil our obligations…,” he had said to his commanders.

Bajwa has extensive experience handling Kashmir. As Major General, he led the Force Command Northern Areas, head-quartered at Gilgit-Baltistan. It is the Northernmost territory currently held by Pakistan. He has also commanded the 10 Corps, responsible for the areas along the Line of Control (LoC).

The Pakistani Army Chief also has the experience of serving under a former Indian Army Chief. General Bajwa had served as a brigade commander during the UN peace-keeping operations in Congo in 2007 under General Bikram Singh. General Singh had described Bajwa’s conduct as “totally professional and outstanding” during the UN peace-keeping operations.

Despite earlier speculations that he was selected the Army Chief by Sharif due to his ‘pro-democracy’ stance superseding two generals superior to him, allegations have been made that he was in bed with the Jihadists who hijacked Islamabad in 2017. He had proposed mediation with the Jihadists for which he was criticized. However, it shouldn’t surprise anyone as it is an open secret that in Pakistan, the Army controls the government.

It was also reported that Bajwa considers religious extremism as a bigger threat to Pakistan than India. However, as his handling of the Jihadi protests shows, he has no qualms with siding with the Jihadists over the elected government. The conduct of the Pakistani Army post his elevation also demonstrates that all such talk is merely fluff. There has been no change in Pakistani policy since his elevation, it continues to be a terrorist state.

Brig (retired) Feroz Hassan Khan, who was Bajwa’s commanding officer on the LoC, claims that Bajwa doesn’t have a “visceral hatred” against Indians. “There is an assumption that every Pakistani military officer who rises has some sort of a visceral hatred towards India, as if it’s a default. This is not the case with (Bajwa) and I can tell you he has studied India so much,” Khan told Hindustan Times in 2016.

Bajwa is also responsible for the destruction of at least one Indian politician’s career. In 2018, he was hugged by senior Congress leader and then a Minister in the Punjab cabinet, Navjot Singh Sidhu. That loving embrace cost Sidhu a lot and he was slammed even by the Punjab Chief Minister. The hug might have cost his party significantly as well.