The District Magistrate Dibrugarh has also ordered shutting down of liquor licensed premises from 4 pm today for 'preservation of public peace and tranquillity'.

Even as the upper house of the Indian parliament discusses and deliberates the provisions of the newly proposed Citizenship Amendment Bill 2019 (CAB), the protest against the legislation have taken an ugly turn in the Northeastern state of Assam. Thousands of protestors opposing the CAB took to the streets of Assam and clashed with police. Angry protestors indulged in arson to register their opposition to the Citizenship Amendment Bill 2019.

Assam: Bus torched by protesters, near Janta Bhawan in Dispur, against #CitizenshipAmendmentBill2019 pic.twitter.com/yUAkYPjWtk

The civil administration in Tripura and Assam have requisitioned three Army columns to contain the violence accompanying the protests. Indefinite curfew has been imposed in the city of Guwahati to prevent the situation from escalating further.

The order issued by the government of Assam says that in order to prevent the misuse of social media platforms such as Whatsapp, Facebook, Twitter in the propagation of rumours and lies, the decision to suspend the Mobile Internet/Data services in select districts for 24 hours has been taken. 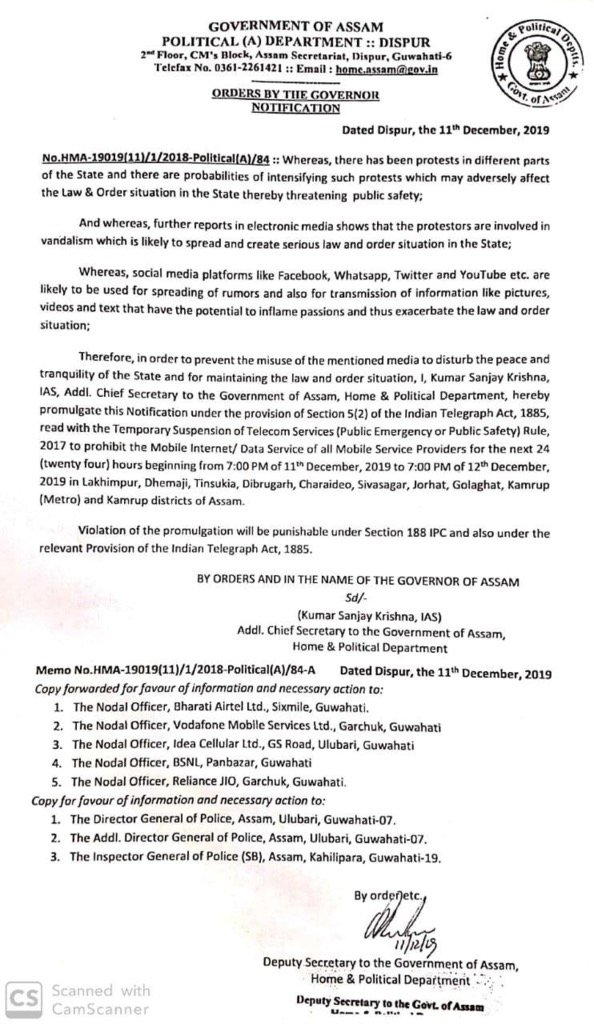 The District Magistrate Dibrugarh has also ordered shutting down of liquor licensed premises from 4 pm today for ‘preservation of public peace and tranquillity’.

Residents in ethnically diverse northeastern states have launched a protest against the CAB bill as it stands to grant citizenship to a large number of minorities who have migrated from Bangladesh in the past decades. Numerous trains have been cancelled as a consequence of the protests and exams scheduled till December 16 in Gauhati University and Dibrugarh University have been postponed.