Journalists use Nankana Sahib attack to claim CAA does not help persecuted minorities entering India after 2014, here is how they are wrong

The claims by senior journalists of the country explain what is wrong with the anti-CAA protests in the nation, that those opposing the Citizenship Amendment Act has not even read the two and half pages of the text that has been in public domain for a long a time now 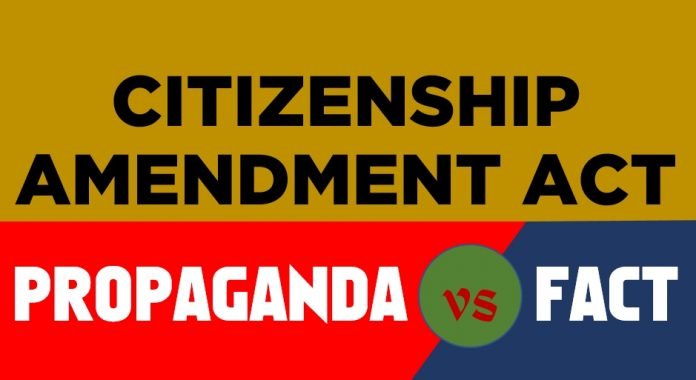 As the terrible news of the attack on Nankana Sahib Gurdwara in Pakistan by a Muslim mob emerged, some journalists chose to use this incident to peddle their propaganda against the Citizenship Amendment Act. The CAA has been passed to give Indian citizenship to persecuted minorities in Pakistan, Bangladesh and Afghanistan.

Yesterday NDTV journalist Sreenivasan Jain claimed that CAA is of little use of minorities presently in Pakistan or the other notified countries. He also hoped that the incident is not used for pro-CAA propaganda, while using the same for anti-CAA propaganda at the same time.

Terrible news. Let’s hope it’s not used for pro-CAA
propaganda. The CAA cutoff is 2014, and so of little use to minorities
presently in Pakistan or the other notified countries. https://t.co/ZGhbvg9xNF

National Editor of The Hindu Suhasini Haidar also made the same claim today, saying that “CAA as drafted doesn’t help anyone who crosses over today”. She said that the amendment helps only those who had entered India before December 31st 2014, and that’s why the law is flawed and it should be revised or scrapped.

Except that the CAA as drafted doesn’t help anyone who crosses over today, only those who sought refuge before Dec 31,2014. Maybe better for the government to revise the flawed law, or scrap it altogether rather than make false claims and invite missed calls to back them. https://t.co/KI9st85rAX

These claims by the senior journalists of the country explain what is wrong with the anti-CAA protests in the nation, that those opposing the Citizenship Amendment Act has not even read the two and half pages of the text that has been in public domain for a long a time now. It is completely wrong to claim that the CAA does not help people from Hindu, Sikh, Buddhist, Jain, Parsi or Christian community from Afghanistan, Bangladesh or Pakistan coming to India after 2014. The amendment does help them, provided they don’t enter India illegally.

Read- Modi government dispels myths about CAA: Here are 19 FAQs and their answers

The CAA has two distinct provisions, which most people have missed or confused the two because they both address the same group of people. Section 2 of the amendment inserts provision in section 2 of the main Citizenship Act, stating that any person belonging to Hindu, Sikh, Buddhist, Jain, Parsi or Christian community from Afghanistan, Bangladesh or Pakistan, who entered into India on or before the 31st day of December, 2014, will not be considered as illegal migrant.

The amendment states that if any case is going on against such people for illegal immigration, such cases will be dropped, and after such persons apply for citizenship of India, the request will be granted subject to relevant terms and conditions related to naturalisation.

Everyone seems to have understood the CAA till this point, because it has another provision at the end. Section 6 of the CAA adds a provision in the clause (d) of the Third Schedule of the Citizenship Act, which deals with naturalisation. The newly inserted provision says, “for the person belonging to Hindu, Sikh, Buddhist, Jain, Parsi or Christian community in Afghanistan, Bangladesh or Pakistan, the aggregate period of residence or service of Government in India as required under this clause shall be read as ‘not less than five years’ in place of ‘not less than eleven years’”.

As we can see, this provision does not mention any cut-off date, which means it is applicable even after 2014. According to the Citizenship Act, when some foreigner wishes to apply for Indian citizenship, such persons must have lived in India for eleven years in aggregate in the past fourteen years. This means foreigners can’t come to India and apply for citizenship immediately, they have to first stay here on valid documents for at least eleven years in total.

This is the requirement for normal naturalisation process in India, and almost all countries have similar provisions. For example, in the United States, a person must have lived in the country as legal permanent resident (green card holder) for at least five years before being eligible to apply for citizenship.

Now the section 6 of the CAA has inserted a provision for the six communities from the three countries, and the requirement of staying in India for eleven years has been reduced to five years for applying for citizenship for them. Therefore, the CAA does help the religiously persecuted minorities in the three countries by reducing the waiting period for applying for citizenship.

Moreover, most opposing the CAA want to portray that the amendment prevents anyone outside the 6 communities from 3 countries from coming to India and seeking citizenship. That is a completely false assumption, and in fact CAA has nothing to do with coming to India. Citizens of any country can come to India using valid documents or seek asylum, and they will be allowed or not allowed to enter India as per existing laws. CAA neither helps nor prevents foreigners from coming to India, as falsely portrayed by opposition parties and journalists.

CAA does a positive discrimination for the notified categories of people, but it does not do any negative discrimination against anyone. Any foreigner can apply for Indian citizenship, and such applications will be considered according to existing naturalisations laws. If the applicants fall under the categories notified under CAA, then such applicants will enjoy the relaxation provided by CAA, for others the law will apply without any relaxation.

CAA will not help only those who enter India illegally after 2014. By saying that it will not help the minorities in the three countries, the journalists are assuming that everyone will cross the border illegally. But that is a completely wrong assumption, as there are legal means available for people to enter India. People can come to India on a valid visa, or they can approach Indian embassies and consul offices seeking asylum. Moreover, unlike the India-Bangladesh border, the border with Pakistan is highly secured and illegal immigration is not easy. Although terrorists use the difficult mountainous routes to enter India which are not well protected, that is not feasible for ordinary civilians.

Therefore, if the Sikhs in Pakistan wish to come to India due to incidents like the Nankana Sahib attack, they can come using valid means of immigration. And as they are under the notified category, they will be granted citizenship five years after their entry, as opposed to eleven years waiting period for other people.