More
Home Media Did you know that only terrorists have hopes, dreams and passions?
Editor's picksMediaOpinions
Updated: 14 February, 2020

Did you know that only terrorists have hopes, dreams and passions?

What kind of human being would choose Feb 14, 2020, to write not about the precious lives of the soldiers who were killed, but spinning tales about the hopes and dreams of the terrorist? Apparently, that’s our liberals.

“… a young boy who dropped out from school after Class 12 would take the keys to his father’s Maruti car and drive it around the village……. He loved cricket. He kept wicket, batted well and perhaps that’s the reason he adored MS Dhoni…..” Who are we talking about here? That would be Adil Ahmad Dar, the terrorist who killed 40 CRPF jawans on Feb 14 in Pulwama last year.

You can read the full HT article if you want to know more about how he did the dishes, helped his mom and bought her little trinkets as gifts. Seems like his life was lifted straight from those “Adarsh Baalak” posters we saw as kids. Except that he was a terrorist. But that’s really not a big deal, is it?

Oh and three members of his family have joined up with terrorist organizations. Nothing to see here folks. Focus on how this is an ordinary family that washes the dishes, buys gifts for each other and enjoys watching/playing cricket.

Oh and they named one of their new born sons after an illustrious uncle who joined the Lashkar e Toiba. But did you know about the time Adil Dar bought his mother gold earrings? Do you see the tears of joy and pride in his mother’s eyes?

“He has had little school education, and lives almost a Spartan life in his ancestral house. Marriage never figured in his scheme of things. There was parental pressure since he is the only son, but he would rather recite a UN memorandum than a nikaahnama (marriage deed). … But when he saw Mushaal, Malik says, it was love at first sight. “I decided there and then that if I were to marry ever, the girl would have to be her,” says Malik with a loving gaze for his bride.”

Not exactly. This is from a 2010 article in Open Magazine, describing the love story of JKLF leader Yasin Malik, who is accused in murder of four Indian Air Force officers in 1990.

But that’s not very interesting, is it? You should read the entire Open article to find out all the little romantic ways in which the bashful Yasin wooed the lovely (and rich) Mushaal Malik of Pakistan. How her friends laughed and giggled at his poor dressing sense. How their love blossomed over MSN chat. I’m telling you : it’s just like a Chetan Bhagat novel, except that the lead character is a terrorist instead of an engineering nerd.

“I would say that he was proud, but not arrogant. He was delicate, but not weak. He was grave, but not severe.”

“Like most children of divorced parents, he felt a loss, for he was no longer as intimately involved with his father’s family.”

Now, what is this? The beginning of another novel about a child on a path of self discovery?

Not exactly. This is the Quint on the “death anniversary” of “father and husband” Osama bin Laden, publishing extracts from a book about his childhood and family. 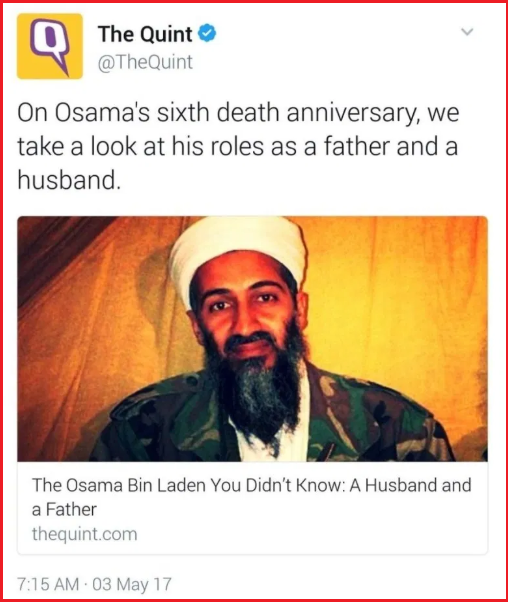 Have you seen our media profile the lives of the soldiers who lost their lives in the Pulwama terrorist attack? Perhaps they also had real lives, real passions and stories that deserved to be told? Perhaps they also went through love and heartbreak, the trials of growing up, strict parents, broken homes. Times when they helped their mother with the dishes or saved up to buy her a gift?

Read: The Quint continues their ‘humanising’ project by whitewashing and creating sympathy wave for Hyderabad rape and murder accused

It seems like we never hear about that. Instead, the grieving families of the soldiers got phone calls from liberal media, perhaps asking something along these lines?

“Hello, I am a liberal journalist. Your caste was not completely clear from your son’s last name. So I got your registered home number from the CRPF. Now, if you are done with performing the last rites of your son, could you quickly confirm his caste so that I can do a headcount for my article? I have a deadline…”

Families of dead terrorists are asked about their hopes and dreams.

Families of dead soldiers are asked about their caste.

That’s Indian liberalism in a nutshell for you, folks.

You have seen the liberals around in Delhi as well, taking selfies and glamorizing mothers who are willing to “sacrifice” their babies for their supposed “cause.” Hints of the same attitude. Meanwhile, anybody who tweets against them is labelled a Nazi and a Fascist.

Today is one year since the nation was shaken by the deadly terrorist attack in Pulwama. Remember how liberals celebrated it with cries of “How’s the Jaish?” One particular channel whose Deputy Editor did that is still out there, presumably speaking up for “Freedom of Expression.”

What kind of human being would choose Feb 14, 2020, to write not about the precious lives of the soldiers who were killed, but spinning tales about the hopes and dreams of the terrorist? Apparently, that’s our liberals.

I recently learned that there is a whole run-up to Valentine’s Day with cutesy, juvenile names such as Rose Day and Kiss Day. At least liberal media didn’t do a series of articles featuring awkward attempts by Adil Dar to meet up with girls at school or in the neighbourhood. We are thankful for small mercies.

In a strong reply, the letter by the Holkars of Indore criticised the editorial piece by Raut and said that it is shameful to compare great leaders of India to today’s mere politicians for petty gains.
Opinions

Israel’s ‘Iron Dome’ Air Defence System: What is it and how does it work

To counter the low-cost warfare initiated by Hamas, the Israel Defence Forces has activated its state-of-art air defence system - 'Iron Dome' to protect its civilian population from the barrage of rockets.

‘No commode’ claims Pappu Yadav who is in jail for flouting COVID norms, complaints of mosquitoes biting him all night

Fearing that Pappu Yadav might become more popular and become a hero-like figure, RJD leaders are condemning this as 'drama'.

As Netizens trend #ArrestMunmunDutta, the actor apologises, says she was misinformed and did not intend to use casteist slur: Details

A report published in Marathi daily Tarun Bharat said that Sharad Pawar conveyed to Sanjay Raut that he made a big mistake by making Uddhav Thackeray the chief minister of Maharashtra.
Read more
News Reports

The high-tech 'Iron Dome' is a short-range air-defence system designed to intercept rockets, artillery, and mortars. The surface-to-air missile system has been deployed by Israel Defence Forces since 2011 and has helped reduce casualties from rocket attacks against Israeli cities.
Read more
News Reports

Cartoonist gets Twitter notice for a caricature of Maharashtra CM Uddhav Thackeray: Details

The narrow escape: How a group of 46 Indian nurses was rescued from ISIS captivity in strife-torn Iraq in 2014

Israel’s ‘Iron Dome’ Air Defence System: What is it and how does it work

‘No commode’ claims Pappu Yadav who is in jail for flouting COVID norms, complaints of mosquitoes biting him all night