Rajdeep Sardesai gets called out for defending Rahul Gandhi 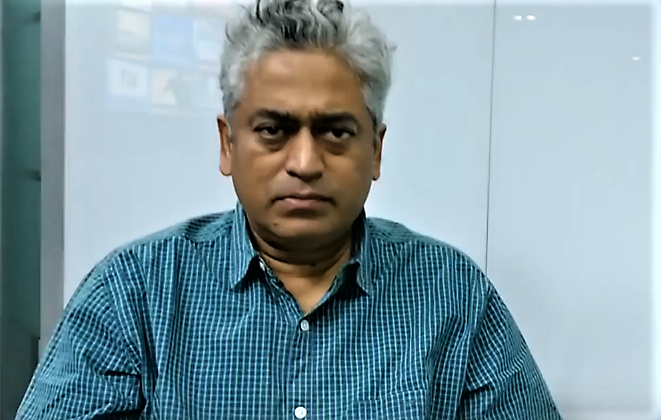 Speaking at the University of California, Berkeley, yesterday, Rahul Gandhi had defended dynasty politics as accepted way in democratic India. However, the League of Dynasty Defenders were armed to take on any criticism that comes Rahul Gandhi’s way.

To @OfficeOfRG credit took all questions from students, some discomfiting. ALL leaders must do likewise in India! No one way talk! #RGInUS

Which is quite contradictory to what had actually happened there.

A lady from crowd heckles moderators at Rahul Gandhi prog ,”how is this free speech if you are controlling what is being asked?” #UCBerkeley

A lady in the audience wanted to ask Rahul Gandhi a question, but was not allowed to do so by the moderators who were asking only filtered questions.

While Sardesai claimed that Gandhi took all the questions in Berkeley and how other leaders should also do the same, Twitterati pointed out how that was not really the case. Those who saw the interview said how the audience was not allowed to ask the question directly, but a moderator would do so, which is not usually the case whenever a talk is hosted at UC Berkeley.

Sardesai then tried to spin it by quoting a professor who was supposedly present at the event saying the question the woman was asking was already asked.

Prof Chibber of Berkeley Univ: town hall with @OfficeOfRG was not scripted; person who objected was asking qs that had already been asked.

Except, that’s not how it happened.

Ha ha.. everyone have heard.. before asking question she is stopped.. it was similar to sardesai’s past interview of Madam Sonia..

Before she asked, they knew what her question was.

Remember Minority Report? Now you know that was Artificial Intelligence?

However, he got called out and Rahul Gandhi’s talk was compared to Sardesai’s interview with Sonia Gandhi which had soft questions like when did Sonia Gandhi first meet Indira Gandhi.

This interesting bit about newsrooms tonight from a friend. So true and apt! #Dynasty #Nepotism #RGinUS pic.twitter.com/xm1psHmFaD

Sardesai, who seemed miffed at his father and father in law (Sagarika Ghose’s father, Bhaskar Ghose, is former Director General of Doordarshan) dragged into the controversy on nepotism, responded how his father being a cricketer didn’t quite ensure that he could become a cricketer as well as merit mattered, not surname.

my father was in a profession where merit mattered, not surname. In cricket, you can’t play for India only bec your father did!

Also important to note here is that Sardesai’s wife Sagarika Ghose has recently written a book on Indira Gandhi calling her most powerful Prime Minister of India.

Scriptwriter of Karan Johar’s film Takht deactivates his Twitter account after spewing hatred on Hindus, here are some of his problematic tweets