It is indeed true that there are no permanent enemies in politics, especially when the political party is as opportunistic as Aam Aadmi Party. Amidst major speculations on who would be nominated, the names came as a surprise to many as a little known Sushil Gupta was one of the names.

As per Aam Aadmi Party, Gupta’s brief profile is as follows:

Soon, Congress leader Ajay Maken tweeted how just 40 days back Gupta had tendered his resignation, claiming he has been promised Rajya Sabha seat.

On 28th Nov, Sushil Gupta came to submit his resignation-

Less than 40 days-Less said the better!

Otherwise,Sushil is a good man known for his charity! pic.twitter.com/DgrYhVaFJA 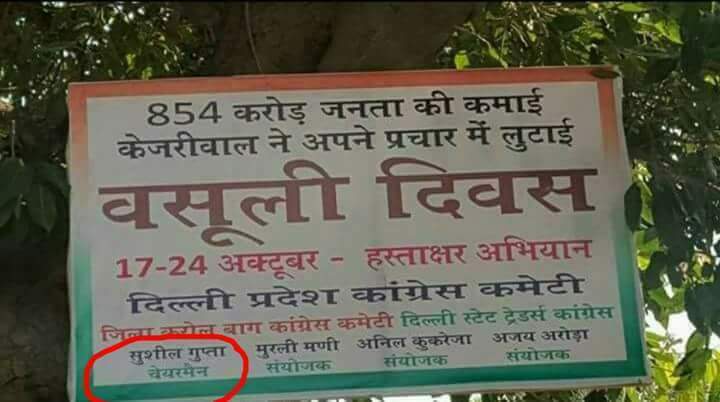 Meanwhile, many people were critical of Gupta’s nomination, including former and current team members of Aam Aadmi Party.

Why was Sushil Gupta selected?

Now there is no diff between AAP and BSP. This leadership isn’t worth supporting.

I can today say w/o any doubt – AAP has become corrupt.

Deputy Chief Minister of Delhi, Manish Sisodia, has said that since Gupta runs a lot of schools which provide free education, he has been chosen. However, the picture could be different.

Sushil Guptaji, runs a few schools. This is the fee structure of one of his schools. pic.twitter.com/BpiI7jqHM7

AAP co-founder Yogendra Yadav, too, was vocally critical of the decision.

I used to say, whatever his other faults @ArvindKejriwal cannot be bought. Defended him against Kapil Mishra’s allegations.
Now I don’t know what to say.
Speechless, ashamed and numb. https://t.co/3rTpNssDVy

They even accused of tickets being bought in Punjab elections and ‘accounts fudged’ and disappointment over AK (Kejriwal) going to ‘such an extent’.

Agree, Mayank bhai, you did alert me to the money angle a few months ago, but I did not believe you. I knew their accounts are fudged. I knew some tickets in Punjab were sold. But I did not believe that Arvind may be directly involved in quid pro quo. Sorry!

Meanwhile, Kumar Vishwas, too, voiced his disappointment at ‘punished’ for saying the truth.

#WATCH: Kumar Vishwas talks to the media after announcement of AAP's Rajya Sabha nominees, says, 'In the form of punishment, I have been given an award for speaking the truth.' pic.twitter.com/xGoxpKvXZg

Rebel AAP leader Kapil Mishra also accused of killing the anti-corruption movement (by siding with Gupta) through his tweets.

Meanwhile, Arvind Kejriwal, instead of answering his volunteers and colleagues, resorted to retweeting tweets which praised him and his decision. 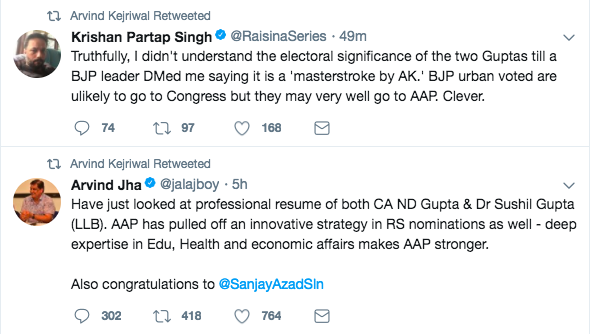