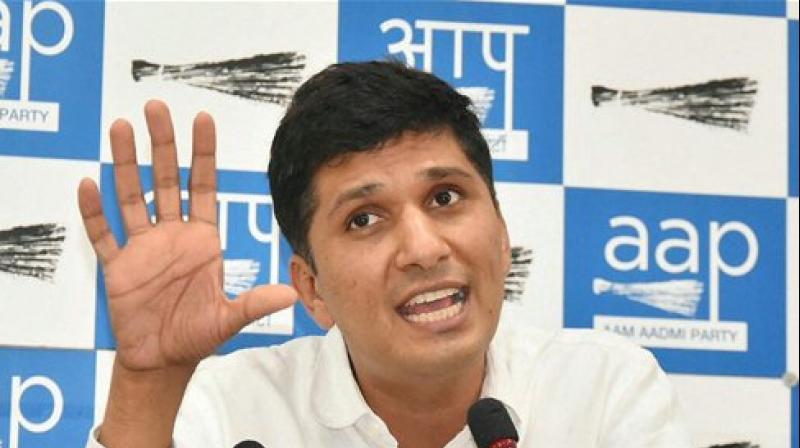 Saurabh Bharadwaj, the AAP MLA who did a grand show of ‘hacking an EVM’ by opening and playing with a toy prototype machine inside Delhi assembly, is now keen on taking his ‘hacking’ talent across the globe. The MLA, whose affinity towards science fiction was confirmed when he had blamed the death of homeless persons in Delhi on intoxication rather than the coldwave, has now decided to go global. He Tweeted yesterday that he had met the opposition leader of a country called ‘Bostwana’ (Botswana) and assured them that he will help them prove the vulnerability of EVMs in their highest court.

And Bostwana Opposition Party president met me and we had assured to help them prove vulnerability of EVM in their Highest Court. https://t.co/5gsEjI0f6W

He had quoted a Tweet from Vinod Kapri, who had shared an article from the Economic Times which stated that the Election Commission of India has deferred from making a commitment to Botswana because the 2019 general elections are looming close.

Further, the article stated that the ECI will not be sharing the same EVM with Botswana but will be designing a different machine for them like they had done previously for Nigeria and Nepal.

As is usual with AAP and its leaders, a conspiracy theory that the ECI is not giving the EVMs because they can be hacked to ‘vote for Lotus’ was soon woven and floated. The “EVMs hacked” theory is being floated by AAP regardless of Karnataka results and the Punjab elections where Congress won. AAP seems to have even disregarded the Delhi assembly elections that got AAP 67 MLAs.

However, Bharadwaj’s claim was soon being discussed on social media and not in a very kind way.

Seriously?? AAP Minister is officially helping a political party in Africa to prove vulnerability of Indian EVM in Botswana Supreme Court??? And btw, what are you going to tell Botswana Court? That you won 67/70 in Delhi elections by EVM fraud?? This is unprecedented. #FacePalm https://t.co/JEQvde1k7B

It is notable here that none of the political parties took up the open challenge by the ECI to prove vulnerability in EVMs when it was to be officially done and demonstrated. Perhaps because floating conspiracy theories is far easier than actually proving them.

“in India – elections are rigged & EVMs are hacked”

Is AAP playing into trade wars of EVM manufacturers & getting money?

So the Urban Naxal that AAP is, is helping a foreign nation in proving that Indian Democracy is a fraud. And that AAP won 67/70 seats using the EVM fraud.

What can be more dangerous and absurd than this? https://t.co/qG4dq1XnXn

Blaming EVMs for every lost election has become the easiest excuse for political parties. Despite the ECI explaining multiple times that tampering is not possible in EVMs, political parties never miss an opportunity to raise questions over a constitutional body and undermine the public mandate, insulting the very ethics of democracy bitterly everytime the results are not in their favour. A few vested interests have even tried to propagate the idea internationally and insult India’s firm democratic system.

A number of countries have shown interest in purchasing and adapting India’s EVMs into their national elections. The fact that in Botswana, the opposition party is appealing in their apex court against the use of the machines after they lost the elections, is hardly an issue to malign the ECI with, because, it is happening in India too. The ECI has already announced that all commission will ensure 100% coverage under VVPAT (Voter Verifiable Paper Audit Trail) to ensure transparency and reliability.