While the Catholic Church has identified only 185 priests with credible accusations against them, as many as 690 priests have been accused of abusing children sexually.

A scathing report by the Attorney General of Illinois, USA, has found that the menace of paedophilia within the Catholic Church in the state is much higher than previously acknowledged.

While the Catholic Church has identified only 185 priests with credible accusations against them, as many as 690 priests have been accused of abusing children sexually. The report says, “Clergy sexual abuse of minors in Illinois is significantly more extensive than the Illinois Dioceses previously reported.”

“Long after legal remedies have expired, the Catholic Church has the ability and moral responsibility to survivors to offer support and services, and to take swift action to remove abusive clergy,” the report adds.

In a statement, the AG’s office said that the probe “has revealed that allegations frequently have not been adequately investigated by the dioceses or not investigated at all.” “The Catholic church needs to prioritize survivors,” Attorney General Lisa Madigan said in an interview. “They can’t continue to prioritize criminal clergy or prioritize the preservation of their assets. They have to follow their own charter and heal the survivors.”

“By choosing not to thoroughly investigate allegations, the Catholic Church has failed in its moral obligation to provide survivors, parishioners and the public a complete and accurate accounting of all sexually inappropriate behaviour involving priests in Illinois,” Madigan said in a statement. “The failure to investigate also means that the Catholic Church has never made an effort to determine whether the conduct of the accused priests was ignored or covered up by superiors,” she stated.

In response to Madigan’s report, the Archbishop of Chicago expressed “profound regret” for the Catholic Church’s failures to effectively address the “scourge” of clerical sexual abuse. “It is the courage of victim-survivors that has shed purifying light on this dark chapter in church history,” he added.

Madigan began her investigation after a Grand Jury report in Pennsylvania discovered that the Catholic Church organized a systematic cover-up of the sexual abuse of thousands of children by more than 300 priests since 1947. The Grand Jury report also elaborated on the Church’s ‘playbook for concealing the truth’. 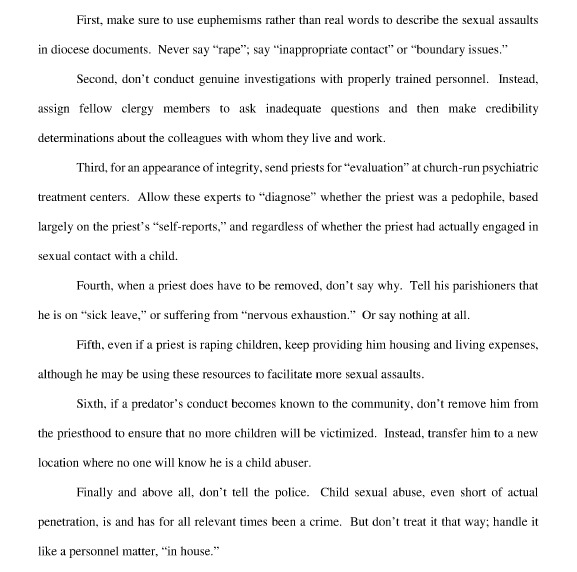 The systematic sexual abuse of children in the Catholic Church has been well known for quite a few years now. Recently, the Church was forced to pay $1 million as compensation to 8 sex abuse victims associated with the famous ‘Spotlight’ case. Chile’s efforts to crack down on the rampant paedophilia within the Catholic Church has left the entire organization red-faced. India has not been left untouched by the menace as well and there have been numerous cases of sexual abuse by members of the Church. Apart from sexual abuse, Catholic organizations have also been involved in baby-selling rackets in India.

There appears to be something inherently broken within the Catholic Church at the moment. Despite their many expressions of regret, their conduct does not appear to change. Even in India, when allegations of rape were levelled against Bishop Franco by a nun, the Catholic Church embarked upon a campaign to slander the apparent victim and did everything possible to protect the accused Bishop.