When an issue gets as politicized as the current matter has, facts take a back seat. Therefore, people averse to Trinamool are blaming them for it, those averse to the BJP are blaming them, those neutral will either judge the matter based on the track record of the parties involved or ignore it entirely when they go to vote. 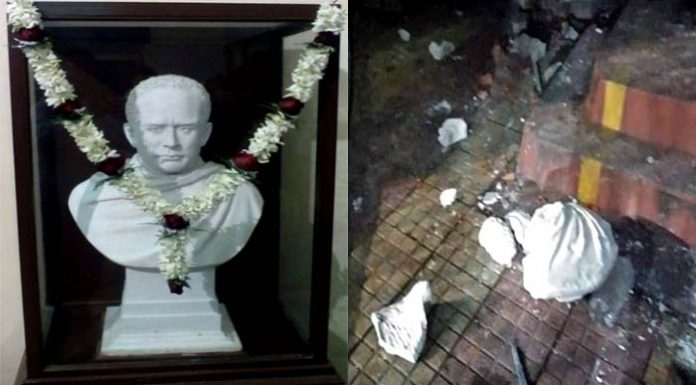 Kolkata was abuzz on Tuesday evening after news started pouring in that status of Ishwar Chandra Vidyasagar at Vidyasagar College in North Kolkata was vandalized by miscreants. Since then, both parties have been blaming each other for the incident.

Supporters of both parties are blaming each other as well and CPI(M) has sided with the TMC on the matter. Neutrals are not quite sure about who’s responsible but they appear to be more suspicious of the TMC than the BJP.

The smashing of the statue was only the culmination of a chain of events that began with TMC’s attack on BJP President Amit Shah’s rally. The BJP supporters were attacked with sticks and stones when they were passing by the Vidyasagar college and probably boosted by Amit Shah’s presence at the scene, they returned the favour with gusto. Full blown clashes broke out between the two parties and vehicles were set on fire. In the midst of the raging chaos, the Vidyasagar statue was smashed as well.

There are several versions of events doing the rounds. According to the screenshot of a Facebook post by one Biraj Narayan Roy that has gone viral, the incident was orchestrated by Trinamool itself. Roy, who claims to be a student of the University and an eyewitness, calls it disgusting politics and blames Trinamool for the entire mess. He claims it was virtually impossible for the BJP Karyakartas to reach the place where the Status was. He says it was smashed by Trinamool itself, then the media was summoned and the BJP blamed through it. Trinamool supporters and Communists are contesting Roy’s version of events by claiming that he is an ex-student of the University and is currently associated with the BJP IT Cell. Although they haven’t really provided any evidence for the IT Cell allegation, the narrative appears to be sticking with people who are averse to the BJP.

There are numerous videos of the incident doing the rounds of social media as well. One particular video captures miscreants vandalizing the statue. A 2-minute 44-second video that is available on the internet purportedly shows the events that transpired last night. The interesting thing to note on the video is that there’s nothing to suggest that the crime was committed by members of either party. Quite clearly, the miscreants are not wearing any saffron garb or carrying any BJP flags or chanting ‘Jai Shri Ram’. Therefore, it’s unclear why people are so quick to blame the BJP for the mess.

One should note at this point, the BJP was participating in a rally when the clashes broke out. Therefore, it’s to be expected that they would be in clothes that displayed their party affiliation. However, in the above video, no such thing is observed. Therefore, the lack of political symbolism on the garments of the perpetrators may indicate which political party is to truly blame for this.

Alleging conspiracy on the part of Trinamool, Amit Shah said in a press conference today, “How could we, outside the locked gate, be present and break a statute inside rooms of the university? Isn’t it a fact that only TMC supporters were on the other side of the gate (inside university)?”

Interestingly enough, Shah’s arguments were being made by people who maintain a neutral stance in politics as well yesterday itself. This OpIndia.com journalist was told by an acquaintance, who happens to be a student in a college at Kolkata, late into Tuesday night, “In order to reach the statue, one has to go through two gates, one metallic and the other one wooden. Bjp karyakartas failed to enter the premises as the entrance was locked from inside. Thus, there is a high probability that people (TMC) inside the building might have denigrated the statue to further their narrative.”

Another individual, who passed out from the University of Calcutta last year, told this journalist, “It does not make sense for the BJP to do it. Why will they dig their own grave with polling to be held on Sunday? I am not a BJP supporter but the thing looks staged. My dad thinks it’s a conspiracy by TMC as well, by Mamata especially. I don’t quite know what to think but people around me certainly seem convinced that Trinamool is responsible for this.”

There are others who are disgusted with politics itself after what happened yesterday. “I am appalled. I don’t put it beyond either party to do it, all of them are capable of such things. I don’t trust any of them,” said another person. There are other people who are voicing similar sentiments. “It’s all a drama and the drama has reached sickening levels,” appears to be the predominant sentiment among significant sections.

Thus, despite the narrative that is currently being peddled by a certain set of people on social media, the vandalizing of the Vidyasagar statue is unlikely to impact BJP’s prospects in the last phase of the Lok Sabha elections in the state in any significant manner. The BJP is in contention in 3 or 4 seats out of the 7 in Kolkata and they will still be in it come polling day.

If anything, it may well work against the Trinamool Congress. There is a general sentiment among people here, both on social media and outside of it, that law and order is the primary responsibility of the state police. And they were unable to stop it before things escalated as has become the norm for quite some time. Therefore, Mamata Banerjee may have to face consequences at the polls for her police’s inability to maintain law and order.

Trinamool supporters and Communists but Trinamool, especially, are playing with fire as well by trying to further a narrative that the violence was organized by people who came from Uttar Pradesh and Bihar to attack Bengalis and statues of Bengali icons. This dangerous brand of regional chauvinism, hitherto not endorsed by any political party in West Bengal, is fast being mainstreamed for political gains. While it is still too early to predict whether the party will have any success, it can be said for certain that efforts are being made towards that end.

Desperate BJP goons from outside Bengal smash statue of Ishwar Chandra Vidyasagar inside the college.Violent mob of BJP ‘outsiders’ in presence of Pukeworthy Shah. How little you know about Bengal, its rich history, its culture. Bengal will never forgive for what you did today. https://t.co/WrFXP6bmJl

Unfortunately for the TMC, however, as its victory in Tripura shows, the BJP is now no longer seen as a party of North Indians alone. Thus, conversations on social media are abundantly available where the BJP is branded as a North Indian party with abusive words for Biharis and Gujaratis and people from Uttar Pradesh thrown in between. And almost as a pattern, a bunch of people from the said communities with their Bengali friends answer these regional chauvinists in kind.

Thus, a distinct possibility that the statue of Ishwar Chandra Vidyasagar, a Bengali icon, was vandalized by Trinamool supporters themselves to alienate the BJP from Bengali culture in the minds of the voters cannot be ruled out.

When an issue gets as politicized as the current matter has, facts take a back seat. Therefore, people averse to Trinamool are blaming them for it, those averse to the BJP are blaming them, those neutral will either judge the matter based on the track record of the parties involved or ignore it entirely when they go to vote. Thus, it doesn’t appear that it will have any significant impact in the polls at all.