The US report insinuated that there was a concerted attempt to marginalize the Muslim community.

The 2019 International Religious Freedom Report by the US State Department was recently made available to the public by Secretary of State Mike Pompeo. The report claimed that the condition of minorities was deteriorating. Today, the BJP National Media Head, Anil Baluni, issued a press release trashing the claims made in the report. 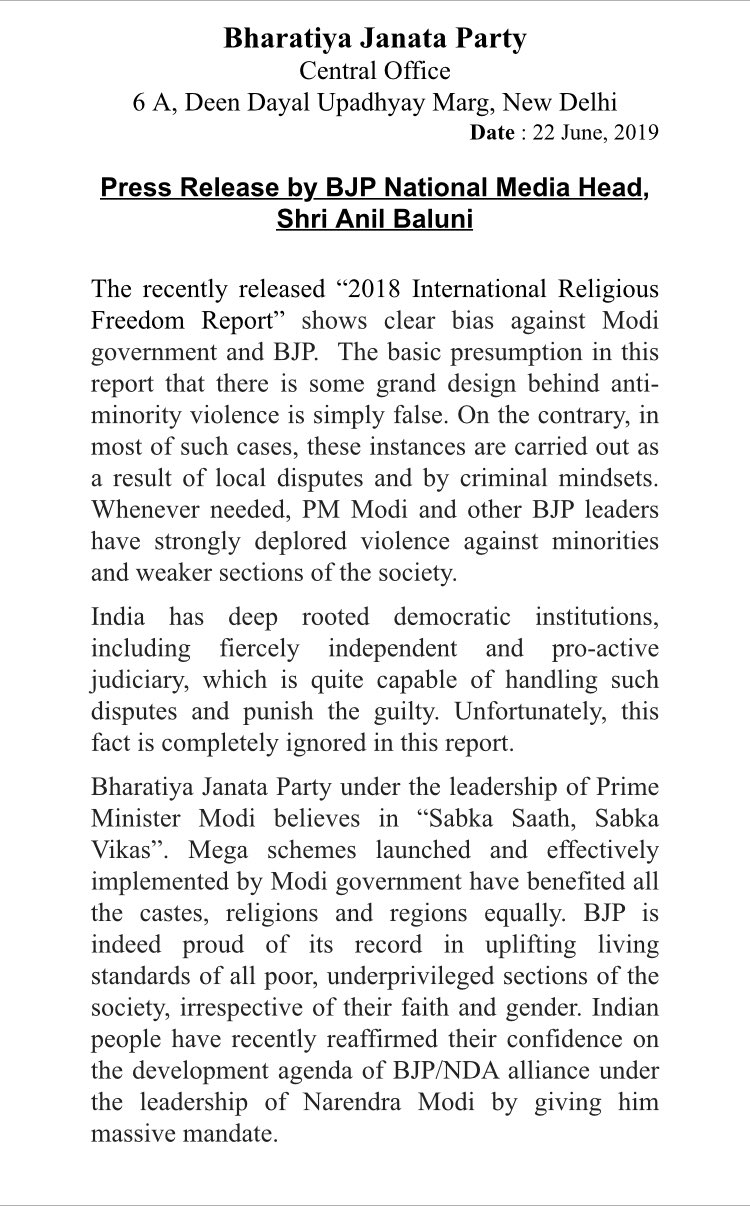 Baluni said, “The basic presumption in this report that there is some grand design behind anti-minority violence is simply false. On the contrary, in most of such cases, these instances are carried out as a result of local disputes and by criminal mindsets.”

Accusing the report of bias, he stated further, “Mega schemes launched and effectively implemented by the Modi government have benefited all the castes, religions and regions equally. BJP is indeed proud of its record in uplifting living standards of all poor, underprivileged sections of the society, irrespective of their faith and gender.”

“Indian people have recently reaffirmed their confidence on the development agenda of the BJP-led NDA alliance by giving Modi a massive mandate in the parliamentary election,” he added.

The US report insinuated that there was a concerted attempt to marginalize the Muslim community. “The government continued its challenge in the Supreme Court to the minority status of Muslim educational institutions, which affords them independence in hiring and curriculum decisions. Proposals to rename Indian cities with Muslim provenance continued, most notably the renaming of Allahabad to Prayagraj. Activists said these proposals were designed to erase Muslim contributions to Indian history and had led to increased communal tensions,” the report says.

“Mob attacks by violent extremist Hindu groups against minority communities, especially Muslims, continued throughout the year amid rumours that victims had traded or killed cows for beef,” it stated.

The report also made references to Gharwapsi and the crackdown on foreign-funded NGOs. “Forced conversions of non-Hindus to Hinduism through “homecoming” ceremonies (gharwapsi) were reported, and rules on the registration of foreign-funded nongovernmental organizations (NGOs) were used discriminatorily against religious minority groups,” it said.

The claims made in the report and the consequent reply by the BJP is largely inconsequential for the relationship between the two countries and is mainly meaningless posturing by the USA. Such reports have been published against India since a long time and yet, ties between the countries have continued to strengthen.

It is one of those things that the USA does regularly to claim the moral high ground despite an overabundance of skeletons in its own closet. There is very little it could do right now about any of the claims made in the report even if they wanted to (and they don’t want to), especially since the Trump administration has started a Trade War with China.

The objectives of such reports are not to unravel some dark secrets or publish authentic truths as well, as is evidenced by the ample amount inaccuracies in it. The main objective is to fill the pockets of those who are tasked with the responsibility of creating these reports. The Americans should question their government why does it even bother to commission such reports and waste taxpayers’ money when they do not intend on doing anything about it.

At the end of the day, it’s the American version of NREGA for bureaucrats. The report mentions human rights violations in Saudi Arabia and Pakistan as well, countries which the US considers its great allies. Therefore, it’s just garbage the only appropriate place for which is the nearest dustbin.

From ‘lagbhag mana’ to putting up poster by AAP leader as DP to attack PM Modi, things have come a long way for Rahul...

Earlier in the day, Rahul Gandhi had put up the poster and urged PM Modi to arrest him. It is imperative to note here that Rahul Gandhi himself is out on bail in the National Herald corruption case as well as many other cases.
World

A video has gone viral on the internet that purportedly shows pro-Palestine demonstrators abusing Jews in the vilest of words.

Malerkotla: All you need to know about the 23rd district of Punjab with a Muslim-majority population

Understanding Cytokine Storm: What it is and how it may be responsible for Covid-19 related deaths

Cytokine Storm happens when the body releases too many Cytokine, it leads to immune system attacking own body cells

The 'apolitical' farmer movement has been nothing but political from the beginning.

As the value of 1 Rupee is equal to 1.16 Bangladeshi Taka, trolls assumed Rupee is weak against Taka and targeted PM Modi

In a recent post, the former cricketer has expressed his overwhelming support for India and slammed international media for vulture journalism
Read more
Media

How NDTV played with words to give impression that Kerala woman died due to Israel, deleted and reposted, but still did not mention Palestine

Charlie Hebdo cartoon mocking Hindu deities for Covid-19 crisis turns out to be fake? Here’s what we know

Some social media users pointed out the hypocrisy of these 'left-liberals', who were just a few months back attacking the same French magazine for publishing cartoons that were allegedly hurtful for Muslims.
Read more
News Reports

Jerusalem conflict: The history of Al-Aqsa Mosque on Temple Mount and the holiest Jewish temple that preceded it

From ‘lagbhag mana’ to putting up poster by AAP leader as DP to attack PM Modi, things have come a long way for Rahul...

Malerkotla: All you need to know about the 23rd district of Punjab with a Muslim-majority population

Understanding Cytokine Storm: What it is and how it may be responsible for Covid-19 related deaths

Over 4500 Covid-19 deaths in the past 24 days not recorded by the Delhi government: Report

Fictional cow dung link to mucormycosis, silence on other fake claims: How ‘public health experts’ destroyed faith in institutions during the pandemic